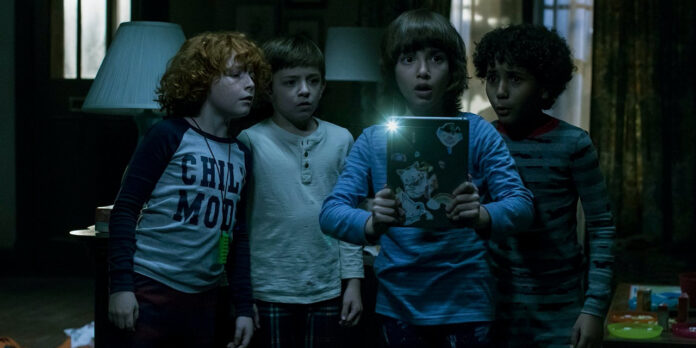 THE STORY – Parents fight to save their son when a mysterious creature uses his electronic devices to break into our world.

The world of the Internet presents plenty of unknown terrors, even for the most casual user, so it’s only natural that horror films have begun to turn to this virtual playground as a place to explore new fears. “Come Play” is the latest addition to the somewhat uneven world of technology-based horror movies. It smartly uses a child as the target of the film’s monster, as they’re obviously the most vulnerable in the real world when it comes to online interactions. And I’m happy to report that the movie does have its decent share of good scares and creepy moments. Unfortunately, they’re practically equaled by the amount of, frankly, goofy moments and dubious dialogue.

The aforementioned kid at the film’s center is Oliver (Azhy Robertson), a non-verbal boy on the autism spectrum. He primarily uses a speech app on his smartphone to communicate with his parents (Gillian Jacobs and John Gallagher Jr.) and classmates. It quickly turns from a helpful tool to a link to a terrifying online dimension as he discovers that a creepy children’s storybook called “Misunderstood Monsters” has somehow appeared on his phone. As he reads this chilling tale, he learns about a horrifying creature named Larry who wishes to cross into the real world to find a friend. The more he reads the story, the more Larry begins to manifest in Oliver’s world. Once Larry starts making his presence known to others in Oliver’s life, it’s up to his parents to try and end the contact between the creature and their son.

As with a lot of horror films, the monster at the film’s center is scarier the less we see of him. There are a handful of sequences in the first half of the film that are genuinely terrifying in the way it builds up dread and anticipation before we even see Larry. In particular, the director makes admirable use of long sequences where his roving camera picks up on multiple frightening things in one long take. The film also uses technology for scares quite well for the most part. In particular, a face-sensing app is used to great success in the way it picks up on Larry before we can even see him. And when we do see him, he’s a truly scary creature that the filmmaker brought to life using impressive puppetry. However, Larry is more effective as a source of fear when the film presents him in a vaguer sense. Before the film delves into him as a character, Larry seems to be a stand-in for any number of online terrors, perhaps most specifically as a metaphor for predatory adults who prey on children through the Internet. Unfortunately, any level of nuance is quickly eliminated the more the characters learn about Larry, and with that also goes the fear that the movie initially evokes.

Even more disappointing than the film’s lack of frightening forward trajectory are the moments that make its actors look unfortunately silly. Jacobs does her best with the material, and she brings a level of reality to her fear that makes her extremely believable as a worried mother. But when she has to yell at an iPad in a moment that’s supposed to be serious, it’s hard not to feel bad for her. There are plenty of scenes and lines of dialogue that any actor would have trouble selling. It’s also hard not to be distracted by this film’s similarity to “The Babadook”. At times it almost feels like a toned-down American reimagining of that Australian horror masterwork. One element of the film that’s refreshing, however, is the speed with which Jacobs’ character believes in the monster. The film avoids the sometimes-tiring trope of characters in horror films denying the obvious paranormal elements of the terrors they are experiencing.

This film arrives just in time for Halloween, and its amount of effective scares make it a decent watch for this time of year. The dialogue and characters may not be particularly admirable, but sometimes all you need for a good late October viewing is a creepy monster lurking in the shadows.