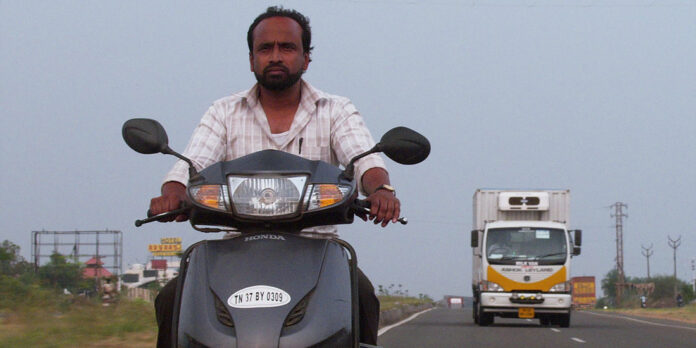 THE STORY – Salesman Nasir lives a contended life with his mother Fatima, wife Taj and nephew Iqbal in a closely populated ghetto. Employed in an apparel shop at the heart of a busy city, the middle aged Nasir is a hard worker. He speaks humorously and makes others laugh. He is also endowed with a half-baked philosophical attitude, so he likes poetry. On Sundays he composes poems along the lines of Hindi film songs of the sixties and launches them in front of his co-workers. When he recites his poems, he starts with his right hand placed over his chest and with wave-like motions nearly brushing the noses of the listeners. He smokes ten Beedis a day and drinks four cups of tea. He goes for his midday prayers occasionally. Nasir’s chronicle emerges through the detailed observation of his vicinity over the span of one particular day. As his day unfolds we find him to be a nimble romantic, marshaling a love of love, song, children, friendship, and even God to rise into something resembling a life well lived. But the increasing communal bigotry has other plans.

​Despite his film’s mostly low-key vibe, 27-year-old writer-director Arun Karthick’s second feature has a real bite, especially in its final, shocking five minutes. “Nasir” is set in the Indian state of Tamil Nadu, which is largely Hindu but has a significant minority population of Muslims as well and follows the titular Nasir (theater director Koumarane Valavane) who operates a fabric store that largely caters to women interested in making distinctive saris.

After seeing his wife Tal (Sudha Ranganathan) off on a bus trip, Nasir opens up his business day in an elaborate scene which shows us just how meticulous he is in getting things just right for his customers before opening his doors. The fabrics have to be folded just so and the colors of his material need to be coordinated to be most appealing to the eyes of his customers.

“Nasir” isn’t terribly plot-heavy which adds to Karthick’s directorial responsibility to keep Nasir’s actions interesting, while at the same time never veering into the realm of melodrama. Part of Nasir’s challenges involve helping his mentally challenged nephew Iqbal (Sabari) cope as he awaits word as to whether Iqbal can get into a special school, a potentially heavy-handed set-up that Karthick negotiates just beautifully.

Set against this relatively everyday set-up is a background in which Hindu nationalism is taking potentially violent form, particularly among extremists which may work its way down towards merchants who simply want to make a living for their families, a facet of the film that explodes in its final sequences.

Based on the 2012 short story “A Clerk’s Tale” by Dilip Kumar, Karthick and Kumar join forces to create a screenplay that, in its own quiet way, illustrates just how powerful “someone random,” as Nasir is described in the film, can live an ordinary life yet still make such a difference.

Obviously shot on a very low budget, “Nasir” paints a vivid picture of everyday life in Tamil Nadu, exemplified by a walk by Nasir and Tal through the street markets of the city that reveals the vibrancy of the populace as other “someone random” merchants try to make their own living. While plot-wise it serves as a way to get Tal to her bus, the sequences add so much to allow us to gain insight into the city and helps us place what happens to Nasir in a proper context.

Though not an actor by profession, Valavane delivers a beautifully subtle performance as the title character, embodying the working man who will put in the time to do his job properly, yet, even so, he will still just barely get by.

“Nasir” is a very modest film which, in comparison with the lavish Bollywood musicals for which Indian cinema is primarily known, might make it appear small, but it’s big in its impact and is a vivid reminder that independent cinema is not just restricted to the United States.