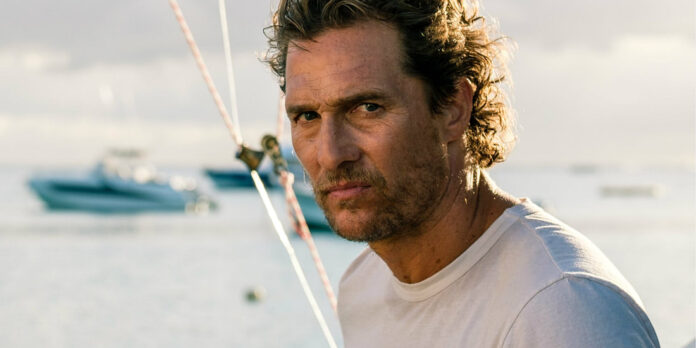 THE STORY – Baker Dill is a fishing boat captain who leads tours off of the tranquil enclave of Plymouth Island. His peaceful life is soon shattered when his ex-wife Karen tracks him down. Desperate for help, Karen begs Baker to save her — and their young son — from her abusive husband. She wants him to take the brute out for a fishing excursion — then throw him overboard to the sharks. Thrust back into a life that he wanted to forget, Baker now finds himself struggling to choose between right and wrong.

​​​Writer/Director Steven Knight (“Locke”) swings for the fences with his latest film “Serenity” and strikes out gloriously. If you ever wanted to see a movie where a young boy’s imagination plays out an overly serious morality tale on temptation and justice for the screen, starring two Academy Award-winning actors saddled with some of the most ridiculous dialogue you are likely to hear this year, then “Serenity” will be for you. If not, then I highly recommend another film titled “Serenity” from 2005.

Baker Dill (Matthew McConaughey) is an alcoholic war veteran who captains a boat off the tropical, isolated island known as Plymouth. Living in isolation, away from his son, his ex-lover comes back into his life (Anne Hathaway) asking Dill to kill her new husband (Jason Clarke) on Dill’s boat in exchange for $10 million. Short on cash and living his life without a care in the world, except with the sole desire to catch a really large trout in the ocean, Dill finds himself caught in a moral quandary that has larger implications than he realizes.

“Serenity” wastes no time in attempting to set a mood from its opening moments, as we are introduced to Benjamin Wallfisch’s soaring music which pounds its percussion aggressively, making this feel more like an action-adventure film than a neo-noir set on a beautiful island. We get a swooping helicopter shot over the ocean showing Dill’s boat (called Serenity) in the middle of the ocean. Dill is completely obsessed with catching a large fish in the ocean, much to the disappointment of his customers he is taking out on the water for the day and his first mate (A wasted Djimon Hounsou). There’s tension, there’s drama and it’s also very very serious.

It’s very unclear from the beginning just what type of tone Steven Knight is exactly going for with “Serenity.” Dialogue is overly dramatic and always a bit off. Characters feel more like archetypes than they do actual people. Music and sound are utilized to emphasize so many moments, we might as well have Steven Knight leap from the screen and tell us exactly how we should feel in any given scene. The acting is extremely forced, by literally everyone. No one walks away from this movie without some form of criticism. I could throw this all at the feet of the script and direction from Knight but none of the actors are able to elevate their roles either, which is amazing given the talent involved. It’s though as if, no one knew exactly what kind of a movie they were all apart of and if that vision was clear to them, someone should’ve told Knight that his tone and style was not the right way to go in selling such a unique concept as this (I’m holding back a lot by not revealing the true nature of the movie). It’s a glorious misfire that is still somewhat fascinating to watch unfold on screen in a shipwreck “can’t look away from the disaster” kind of way, as the actors try their best to take everything so seriously when the movie is just about as serious as a video-game.

Steven Knight tried to give us something unique with “Serenity.” Something different. I applaud him for trying. However, his latest effort tries too hard to be clever by juggling too many different genres and themes. In the process of doing so, it not only can’t decide what it wants to be but it’s forced to have its actors deliver some of the worst noir, tough-guy dialogue I’ve heard in quite some time. It features a twist that is so unbelievable that it almost justifies the completely baffling character decisions, dialogue and ham-fisted acting that came before it. However, by that point, all we’re left with is a laughably implausible story that wishes to teach us some sort of a moral lesson. I never thought I would say this but give me a shirtless Matthew McConaughey romantic comedy that knows what it is instead of an overstylized serious drama with a butt-ass naked Matthew McConaughey that can’t decide what it wants to be any day of the week.