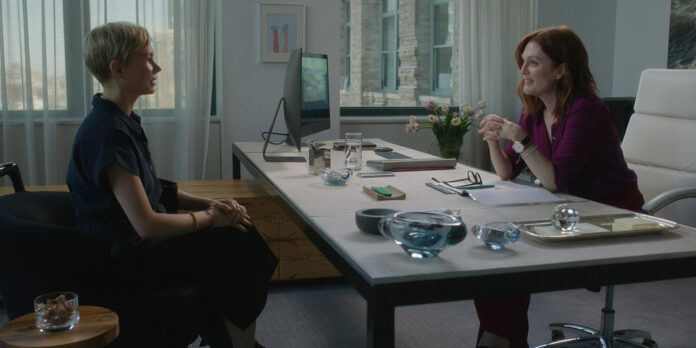 THE STORY – Isabel (Michelle Williams) has dedicated her life to working with the children in an orphanage in Calcutta. Theresa (Julianne Moore) is the multimillionaire head of a media company who lives with her handsome artist husband (Billy Crudup) and their two adorable twin boys in New York. When word comes to Isabel of a mysterious and generous grant for the financially struggling orphanage, she must travel to New York to meet the benefactor—Theresa—in person. And when Isabel is spontaneously invited to Theresa’s daughter’s wedding, Isabel discovers a connection to Theresa that takes her on an unexpected journey into her own past.
​
THE CAST – Julianne Moore, Michelle Williams, Billy Crudup & Abby Quinn

​A 2019 remake of the 2006 foreign film of the same name by director Susanne Bier, writer/director Bart Freundlich’s “After The Wedding” swaps the gender roles initially played by Mads Mikkelsen and
Rolf Lassgård and replaces them with his own wife Julianne Moore and Michelle Williams. The result is a moving adult drama, filled with very human moments of betrayal, love, mistrust, and regret. The performances from the entire cast are also absolutely stellar. So, why does this version of “After The Wedding” fall short of greatness?

Isabel (Michelle Williams) has been living in Calcutta India, dedicating her life to running an orphanage for young children. Short on supplies and money, she travels to New York to seek funding from multimillionaire media head Theresa (Julianne Moore). Determined to leave with the money in hand, Isabel accepts Theresa’s offer to attend her daughter’s wedding as a gesture of good will, provided they will conclude business after the wedding. However, when Isabel meets Theresa’s artist husband Oscar (Billy Crudup), a connection from her past is revealed and has a ripple effect on the lives of Theresa, Oscar and their newlywed daughter Grace (Abby Quinn).

One thing I really appreciated about the 2019 version of “After The Wedding” was the acting by its cast. Michelle Williams, Julianne Moore, Billy Crudup and Abby Quinn all have opportunities to showcase their talents in both big moments and the smaller moments. The subtext, the minor glances, the internalized feelings that radiate off of the screen, these are the moments which shine through when you have a cast this talented performing your screenplay for you. While “After The Wedding” does take a while to find its footing and get going, it at least spends those crucial few opening minutes establishing who each of these characters are until the inciting incident is introduced, propelling the characters and the narrative forward into an emotional wallop of a third act that didn’t leave a dry eye in the theater.

There are delicate, tough adult conversations that need to be had between these characters which are unpleasant and I don’t wish upon anyone but are in most cases, a natural part of life that we all must confront at some point. “After The Wedding” handles these moral dilemmas and harsh truths with honesty and subtlety (that is, until Julianne Moore’s last scene which is an emotional powerhouse) revealing layers to these characters that makes them feel believable and relatable.

Bart Freundlich’s film doesn’t do much to change the independent landscape or introduce anything we haven’t already seen before. His cinematography is sophisticated if a bit flat. The other technical elements are suitable but nothing revolutionary. His version of this story is a nice complimentary piece to the 2006 original film but not what I would consider wholly essential viewing. “After The Wedding” is much like other adult independent dramas you have seen before (including last year’s other brutally honest Sundance film, “What They Had”) but it’s by no means a terrible movie. The cast alone is worth the price of admission and there are indeed some crucial life lessons to be learned here in regards to motherhood, keeping secrets from one’s family and being honest in the face of heartbreak.