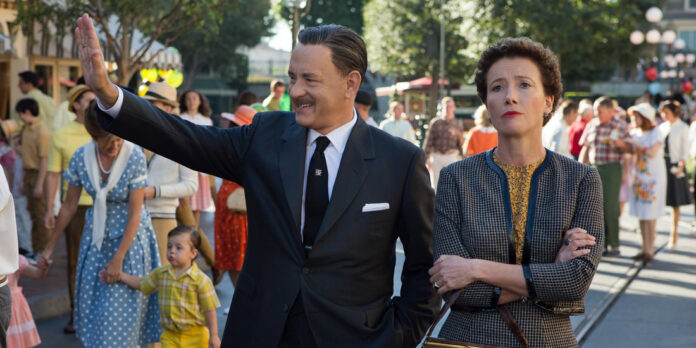 THE STORY – Spurred on by a promise he made to his daughters, Walt Disney (Tom Hanks) embarks on what would become a 20-year quest to obtain the movie rights to “Mary Poppins.” The author, P.L. Travers (Emma Thompson), proves to be an uncompromising curmudgeon who has no intention of letting her beloved characters become mangled in the Hollywood machine. However, when the books stop selling and she finds herself in need of money, Travers reluctantly agrees to consider Disney’s proposition.
​
THE CAST – Emma Thompson, Tom Hanks, Paul Giamatti, Jason Schwartzman, Bradley Whitford & Colin Farrell

“Saving Mr. Banks” isn’t exactly what you would expect from a movie about the making of beloved Disney classic, “Mary Poppins.” This 2013 film, directed by John Lee Hancock, explores the complicated relationship between the author of the novel the film is based on and Walt Disney himself as he attempts to win her over on the idea of a movie adaptation. It’s surprisingly melancholy in tone, but in an oddly pleasing way that feels reverent of the subject material as it reveals how the film “Mary Poppins” almost never was.

At the sunny Walt Disney Studios in California, Walt Disney (Hanks) tries to convince ornery English author P.L. Travers (Thompson) to grant him the rights to her novel, “Mary Poppins,” to be made into a film. However, she resists because she’s concerned that Disney doesn’t understand her book. Through the course of the film, flashbacks reveal that her novel has been influenced by her childhood relationship with her father, Travers Goff (Colin Farrell), who suffered from alcoholism.

A unique aspect of the film is that it gives a glimpse into the Walt Disney Studios in the 1960s. I once toured the studio including Walt Disney’s restored office. This film perfectly encapsulates what it’s like to be there and some of it was even filmed onsite. One of the film’s most lovely sequences is when Disney takes Travers to Disneyland and the audience gets to see the park in all its original vintage glory. The flashbacks to rural Australia are firmly differentiated aesthetically which helps the audience in jumping from world to world. The costuming, while fairly tame for a period piece, is well done.

The performances in the film are almost universally impressive. This does not feature Colin Farrell’s best work, though he delivers enough to make the flashbacks touching. The way in which Tom Hanks portrays Walt Disney is fascinating to behold. He takes a rarely portrayed larger than life figures and adds a charming, sometimes frustrating, human element. Emma Thompson is provided a great vehicle to show off her brilliance with her portrayal of P.L. Travers. Thompson can portray so much with so little and truly carries the film with her award-worthy performance.

Admittedly, the history portrayed in the film is not exactly accurate. It does at times feel like a disservice to portray Travers as being ultimately happy with the resulting movie when she was, in fact, rather upset about it. Because the film comes from the Disney studio itself, it portrays a fairly sanitized version of Walt Disney — though arguably, that is because that is the version of the man that P.L. Travers would have personally known.

Ultimately, the film provides a service to the memory of P.L. Travers. It helps inform the world of her existence and that “Mary Poppins” comes from a very special place in her heart. I am not sure many were aware of this personal connection. The movie did not do as well as predicted when it came to Oscar success. In the end, only Thomas Newman’s score received a nomination, though Thompson showed up in the majority of the 2013 precursors. Perhaps “Saving Mr. Banks” will be revisited in years to come thanks to the release of “Mary Poppins Returns,” a sequel to the original “Mary Poppins” film starring Emily Blunt and Lin-Manuel Miranda. For me, at least, this film was integral to my understanding that Mary Poppins wasn’t there to save the children after all, but to find some redemption for P.L. Traver’s own father. ​