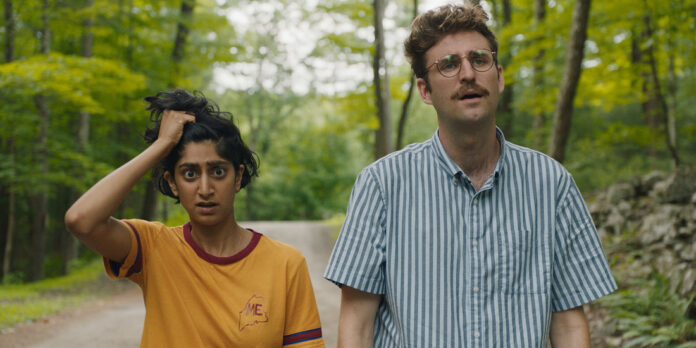 THE STORY – A young Brooklyn couple head to an upstate cabin to unplug from their phones and reconnect with each other. Blissfully unaware of their surroundings, they are left to their own devices as the planet falls under attack.

​​​​“Save Yourselves!” hits harder than perhaps its filmmakers ever intended when making it. It tackles the one-two punch of social media/device addiction and the scale of an apocalyptic global crisis. In a world in which most people are confined to the indoors with their devices during a global crisis, it’s very much a film that speaks to the current moment. Unfortunately, that relevance only goes so far in light of the film’s small scale and thematically muddled third act. Still, it’s a cute, quintessentially indie Sundance comedy, led by two endearing performances.

Su (Sunita Mani) and Jack (John Reynolds) are two hopelessly device-addicted millennials sleepwalking through a relationship. Desperate to save themselves from their addictions, they turn off their devices and flee to a cabin in upstate New York to unplug and reconnect, unaware that an alien invasion is occurring in their absence.

People say it’s not the end of the world to be away from your email, but what if it actually is the end of the world? It’s an amusing premise, but, unfortunately, the obliviousness gag can only be stretched so far before narratively the film requires that the invasion reveal itself. That’s when the film begins to falter. It boasts a very pointed message, but its final third seems to lose its grasp on that message. What comes next is still amusing, but doesn’t hit as hard as what came before.

Additionally, the ending doesn’t quite stick the landing. Despite that, Mani and Reynolds are a fun duo. They play well off of one another and keep you engaged. You buy them as a real couple. The pop culture reference-filled dialogue and gentle millennial/internet culture satire are amusing. The film could’ve been meaner if it wanted, but it chooses to lightly poke fun instead. Still, it’s one of the more effective commentaries on social media addiction we’ve seen, coming a long way since the inept work in Jason Reitman’s “Men, Women & Children.”

There are occasional fun gore effects, as well. The film is an old school sci-fi and is full of loving references to sci-fi classics like “Day of the Triffids” in its creature design. Given that the film chooses to depart from its satirical angle as the plot progresses, we could have benefitted from seeing more of the alien invasion in action.

Ultimately, “Save Yourselves!” is the most quirky Sundance comedy imaginable, but it’s executed well enough not to be insufferable. Its two leads and its writer-director duo, Alex Huston Fischer and Eleanor Wilson have a knack for comedy, and I look forward to seeing what they make next as they refine their craft.