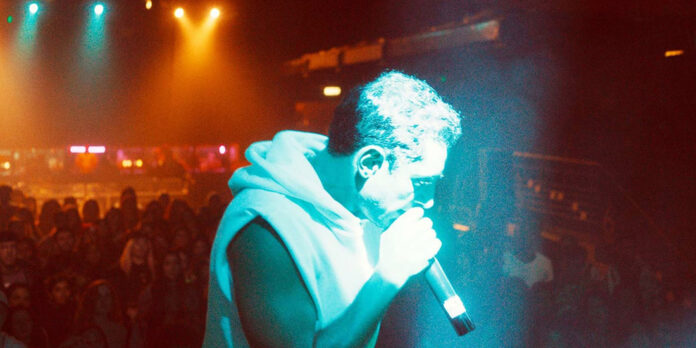 THE STORY – On the brink of his first international tour, Zed, a British Pakistani rapper, decides to fly home to the UK to visit the family he has not seen in two years. In the midst of trying to reconnect with his parents, he is suddenly struck down by an autoimmune disease. As his condition worsens and his big breakthrough moment is in danger of vanishing into thin air, Zed descends into a physical and emotional crisis, amplified by vivid hallucinations.
​
THE CAST – Riz Ahmed, Alyy Khan, Sudha Bhuchar, Nabhaan Rizwan & Anjana Vasan

Legacy and trauma are the two driving factors that sums up Bassam Tariq’s directorial debut. Written by Tariq and Riz Ahmed (who also stars in the film), “Mogul Mowgli” follows the character of Zed (Ahmed), who is a British Pakistani rapper about to leave for his first world tour. Zed is a young man who has been showered in the British and American rap culture, disguising his heritage as nothing more but the bottom that he worked from. The entourage and collaborators around Zed are in the same boat as him, young, fresh-looking and ready to break the scene by appealing to its hypersexuality and urban viewpoint. Zed believes he’s the next big thing and that this is his chance to reach stardom, although the film often leaves that at Zed’s own viewpoint.

Tariq does a fantastic job of depicting the culture of the rap scene with underground gigs, rap battles etc. The verses exchanged have authenticity to them but the breaking down of Zed’s character is what makes “Mogul Mowgli” stand out. An unfortunate tragedy happens as Zed is diagnosed with a chronic autoimmune disease, slowly losing his ability to move and function. Moving back with his family to London, this is where Zed’s timeline is laid out to us as we see glimpses of his childhood and home. Scenes with his family are filled with visual color and culture, juxtaposed brilliantly with the grey of the urban rap setting or the white plainness of Zed’s hospital bed. Zed’s stubbornness is made clear when the fear of his legacy being tarnished looks minuscule to his family who is worried if he’ll survive another few more months. Tariq and Ahmed depict a true definition of the fierce competition that the underground music scene has, alongside the passion of the individuals trying to make it.

Riz Ahmed deserves most of the praise for carrying this film with his outstanding performance. Nobody doubts his talent as one of the most versatile and encapsulating British actors around today and “Mogul Mowgli” further solidifies this, despite the role not being too dissimilar from what he has played previously. Certain subtlety in Zed’s scenes when he’s trying to ignore the fact he’s dying has as much emotional strain to it as when he finally does breaks down. A scene in a hospital bathroom with his mother and father as he’s screaming at them to leave is as vulnerable as Riz Ahmed has ever been on-screen.

Heritage is something that Tariq keeps coming back to as Zed gets sicker throughout the film. A reoccurring figure keeps visiting Zed in his dreams and the blend of oranges and yellows that drapes this figure emerges within any setting that Zed sees them in, from a hospital corner to the back of a crowd in a rap battle. This figure’s link to Zed is of his Islamic culture and Pakistani heritage; both factors that seem rooted in Zed’s trauma and tarnished relationship with his parents. Other surreal imagery accompanies the film to signify Zed’s breakdown from reality. As the hospital becomes more frequent in Zed’s story, so too does these flashes of color disguised as surreal images of childhood trauma. Tariq phenomenally illustrates the effect of this upbringing on young British-born minorities like Zed.

Not only adorned with color but also shot in a 1.33:1 aspect ratio, everything about the look “Mogul Mowgli” feels trapped and closed in whether it’s characters exchanging conversation or close-ups of a hospital bed. The often experimental look of the film does more for it than many other technical aspects. We feel Zed’s rage, his anger and questioning of “why him” and “why now?” The ending is hauntingly poetic, a real masterclass in filmmaking, and a stand out British film of the past few years. We can only hope for more from Tariq and Ahmed in delivering these stories of legacy, heritage and facing the inevitable.