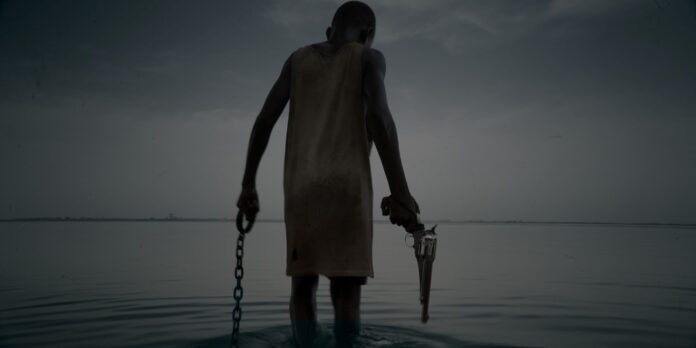 THE STORY – Shot down after fleeing a coup and extracting a drug lord from Guinea-Bissau, a group of mercenaries must lie low at a remote holiday camp, stash their stolen haul, and repair their plane to escape back to Dakar, Senegal.
​
THE CAST – Yann Gael, Roger Sallah, Mentor Ba, Evelyne Ily Juhen, Bruno Henry & Marielle Salmier as Sephora

Stories about monsters have always had a powerful hold on the cultural psyche. They are often towering figures in local fables, revealing a sinister aura that plagues a community that also illuminates the more realistic dangers that are hidden by metaphor. The source of these tales has the capacity to be uniquely tailored and specific yet appeal to a universal truth that haunts any individual. “Saloum” exists in a world where people are preyed upon by malevolent forces, both of otherworldly origins and man’s own making. It is a scrappy exercise that occasionally can’t stretch quite as far as its ambition demands. However, it remains an enticing piece that showcases what intriguing storytelling can accomplish when the horror genre is cast within a new lens.

It is 2003, and a region in the West African country Guinea-Bissau is suffering from a violent coup as the government and rebel forces are warring with each other. The source of this conflict stems from the foreign drug lords that have a controlling influence in the region. A band of mercenaries, known as Bangui’s Hyenas, are extracting one of the traffickers after a bloody massacre. However, their plans are thwarted when a malfunction on the plane forces them to make an emergency landing. In search of rest and supplies, they travel to a remote village in Saloum, Senegal. The scenery is calm and idyllic upon first glance, but their residency soon exposes a mystical secret, an evil that has been kept at bay until now and will force all manner of demons out from the shadows.

There is both a grandiosity and intimacy that writer-director Jean Luc Herbulot aims to capture. The scope is never too expansive, choosing to focus mainly on a narrow selection of characters on a relatively small-scale journey. These are the moments that highlight a dynamic sense of filmmaking, with a fluid camera that creates a sense of momentum, which is highly effective. The tension is naturally crafted and surprisingly potent even when the surroundings are in bright sunlight. There is a slight danger to the admittedly inexpensive production by cheapening the overall aesthetics, but Herbulot displays such directorial confidence that those elements do not impact the overall scene. The supernatural aspects are held until a later revelation, allowing for a more precise strike that resonates so much more.

The story he creates is a mixture of both fascinating thematic commentary and frustratingly muddled construction. The characters at the center of this story are all playing within layered roles, hiding information to the point where it can be difficult to connect with them fully. When the dread is more fully brought to the surface, the specific rules regarding these monstrous beasts are opaque, which lessens the overall impression. This is not helped by a lackluster creature design, and it all contributes to less-than-desirable pacing. Still, there is much appreciation for how the film links its genre to the trauma being exhibited. It’s a common trope in horror films these days, and despite the shaggy presentation, the film manages to link these two facets more successfully than many mainstream efforts. The violence of war and its lasting effects on a community is properly explored in avenues that are resonant with the tone. The execution isn’t perfect, but it is compelling.

The central performances are also quite endearing and aid in the development of one’s emotional connection to the narrative. Yann Gael is the leader of this notorious pack, a man with a steely resolve whose dark past carries a substantial burden that torments him. He possesses a warm, engaging presence that can be charming and terrifying, all with a tinge of melancholy to give his portrayal more nuance. Roger Sallah and Mentor Ba are the other “Hyenas,” and they give turns that are foreboding yet engrossing as well. The supporting cast is littered with capable turns, most notably Evelyne Ily Juhen and a resident in the village with a hardened determination to join the fight. Many films that deal in this genre are not known for bolstering incredible acting talent, but the ensemble does a fine job at elevating the entire work.

When a story deals with specificity, it can be a great opportunity to make a statement that is both personalized to one group and universal to a general audience. Much of what makes “Saloum” unique can admittedly feel messy in its explanations, and the final results are weighed down by some of the unpolished components. However, what makes this ultimately such a captivating film is its pure authenticity. Every note has a genuine affection not only for its characters but for the world it inhabits. The pieces that construct this environment are enthusiastically assembled, and the energy is palpable and radiant. With shining performances as well, this is ultimately an accomplished demonstration of the many types of monsters that lurk among us. Perhaps not the glossiest production, but alluring nonetheless.

<b>THE GOOD - </b>The film is a captivating story about real and metaphorical monsters, bolstered by dynamic filmmaking and a strong thematic commentary. The tension is built up well through the atmosphere. The performances from the whole cast are endearing, particularly from Yann Gael as the lead.<br><br> ​ <b>THE BAD - </b>The execution isn't the most polished, and the shaggy presentation occasionally undermines the impact of the aesthetics. The creature design is primarily underwhelming, lessening the terror towards the finale.<br><br> ​ <b>THE OSCAR PROSPECTS - </b>None<br><br> <b>THE FINAL SCORE - </b>7/10<br><br>"SALOUM"