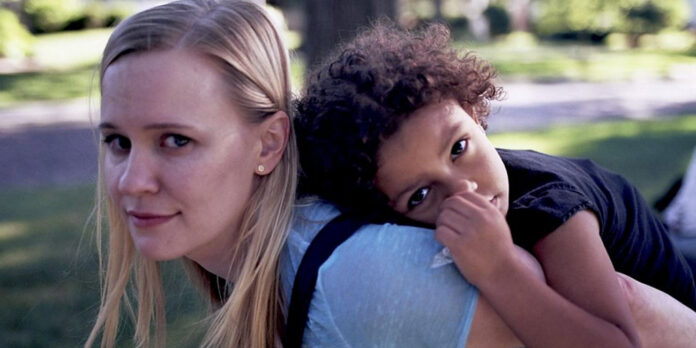 THE STORY – Struggling with her personal life and her career, a deadbeat nanny ends up finding an unlikely friendship with the six-year-old she’s hired to look after.

​Do you ever watch a film and instantly fall in love with it? Well, that’s the case for Alex Thompson’s “Saint Frances” which is such a charming, funny, and witty film that it’s hard not to fall head over heels in love with it. The film’s screenplay is penned by Kelly O’Sullivan who also stars as the protagonist, and it’s clear that both Thompson and O’Sullivan make a perfect duo. This is a film that feels fresh and original on so many levels, and it’s an absolute joy to watch. It’s not often that a film like this comes along, and frankly, we need more films like “Saint Frances” in our lives.

O’Sullivan plays Bridget, a 34-year-old woman who has no clue about what to do with her life, even resorting to asking Google for the answer. When we meet her she’s being chatted up by some creep at a party, but luckily, she ends up going home with Jace (Max Lipchitz), a much younger and far more sensitive millennial (although Bridget adamantly denies she’s a millennial: “I’m on the cusp”). The next morning, Bridget wakes up with blood on her face and bloody bedsheets, but this isn’t a murder scene, she’s simply on her period. Rather than freak out, Jace seems completely fine with it, and why shouldn’t he be? It’s completely natural and it’s wonderful to see this being portrayed on-screen, as the portrayal of menstruation in film has often been depicted as something terrifying and monstrous. Instantly, this is what sets “Saint Frances” apart from other films, it’s grounded in reality, and more importantly, it captures what it’s like to be a woman in 2020.

Bridget is hired by a mixed-race lesbian couple (Charin Alvarez and Lily Mojekwu) as a nanny for their daughter, Frances (Ramona Edith Williams). It seems like an odd career decision by Bridget, who doesn’t seem to be the natural caregiver type, but quickly she begins to develop a relationship with not only Frances but her mothers Maya and Annie. However, Bridget’s personal life gets more complicated when she discovers she’s pregnant.

“Saint Frances” whizzes along with such speed that there’s never a dull moment, and even when some scenes feel a little forced or cliched, the film quickly follows up with a moment that feels revolutionary and progressive. Topics that are still considered taboo by some such as same-sex parenting, breastfeeding in public, and abortion are tackled in such a normal fashion and it’s so refreshing to have these subjects dealt in such a matter-of-fact manner. All the characters feel fully developed and we get the impression that the world that the film takes place in is fully real.

Bridget is a character in the same vein as Jillian Bell’s Brittany in “Brittany Runs a Marathon” or Phoebe Waller-Bridge’s titular character in “Fleabag”. This is a woman who’s just trying to figure out what to do with her life, and she has her faults and issues – as we all do. It’s frustrating that we don’t have more female characters like Bridget being depicted in film. Bridget is surrounded by her successful peers who all seem to be settling down. We have all encountered that feeling of helplessness and frustration as we watch our former classmates lead seemingly perfect lives. O’Sullivan’s script is full of relatable moments that will certainly resonate with many dissatisfied millennials who are currently going through their own identity crises.

The supporting cast are all wonderful, especially Williams as Frances, who is the MVP of the film. Williams’ Frances is just so charming, witty, and adorable that it’s hard not to be impressed by the ferocity of her performance. If there’s anyone who steals the film, it’s her. Frances is a representation of our inner child. Her optimism and appetite for life is something we should all take on board. Alvarez is also worth mentioning, as we watch her character struggle with postnatal depression. We feel for her completely, and again, this is treated in a sensitive manner. Lipchitz also delivers a great performance as Bridget’s sort-of boyfriend, and their scenes together are full of witty banter and comedy.

There are some elements that don’t exactly work: the ending feels a little too neatly resolved and tied up. Some may see it as a little too formulaic, but it does work in a traditional sense. There are some crude moments too; however, it’s hard not to fall under the spell that is “Saint Frances”. Fresh, funny, and original – more, please!