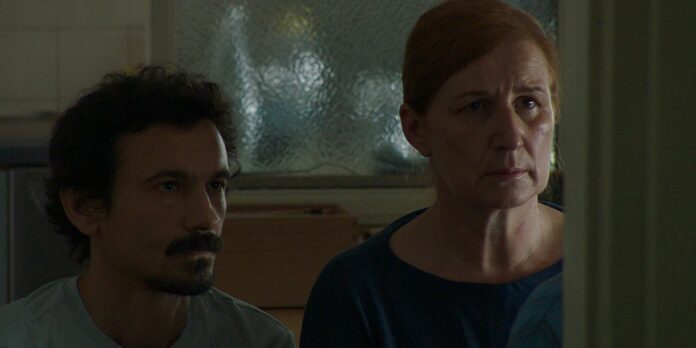 THE STORY – A traumatic event – a suicide attempt – creates a rift in a family’s everyday existence. Their lives fundamentally change, as if they are waging a war invisible to everyone else.

Juraj Lerotić’s “Safe Place” begins with a foreboding quote that sets the tone for the rest of the film. “If none of this had happened, I could have told you: Look, this is your building, count to twenty, and I’ll come running into the scene.” Sure enough, a man frantically runs through a Zagreb neighborhood and starts kicking down the door leading into an apartment complex. There’s panic in everything he’s doing, and for a good reason: He’s trying to save his brother, who has attempted suicide. When we see a glimpse of what his brother has done, we understand the urgency.

What follows in Lerotić’s debut feature – and Croatia’s official submission to the Best International Feature Film Oscar category – is an intimate and deeply personal story that follows two brothers and their mother as they try to grapple with this suicide attempt and what could have led to it. In mostly quiet, emotional moments, Lerotić allows this small but mighty cast to show their talents and treat this subject respectfully. Along the way, he also poignantly shines a light on the healthcare system that failed this family and possibly others.

“Safe Place” is an autobiographical story of sorts. Lerotić plays Bruno, the caring and concerned brother who tries his best to help his younger brother, Damir (Goran Marković) and understand what he’s done. He keeps his performance grounded and acts like anyone else would in this situation: He runs to be by his brother’s side, frantically keeps calling the ambulance to see why they haven’t arrived at the scene yet, and asks everyone at the hospital how this could have happened. According to Bruno, Damir never showed any “signs” suggesting he wanted to end his life, although that rarely seems to be the case. Damir is a quiet, sad-eyed man who doesn’t share much with Bruno or his mother (Snježana Sinovičić Šiškov), so not much insight is gained as to what could have led up to this day. Overall, Lerotić provides very few details about these characters’ lives, making them feel all too distant. But the three core players all do a fine job with their performances.

But then Lerotić decides to break the narrative structure and reveal even more harrowing truths to this tale, which won’t be spoiled here. It’s an interesting twist and among one of the most emotional aspects of the film, as Bruno and Damir share a quiet moment recounting moments from the past. But soon, everything goes back to the conventional storytelling methods, which is a bit of a letdown.

The rest of the film is focused on a number of struggles Bruno and his mother face once Damir is in the hands of the hospital system. Doctors don’t care to treat this case professionally or show much worry over Damir’s mental state, even though his family is begging for any answers or advice. Damir, later diagnosed as schizophrenic, is anxious and escapes from the hospital at one point so that he can return to his home in Split, although that further puts him in danger. Bruno also must answer unfriendly questions from the police. It’s a damning image Lerotić paints of all these different systems in play in order to hold them accountable for everything he and his loved ones went through. But he still manages to incorporate traditional Balkan dark humor throughout the script, which gives us some relief in the midst of so many difficult moments.

“Safe Place” would have flourished by leaning more into its imaginative, albeit brief, reality-tilting storytelling structure, but many other technical elements elevate this piece. Cinematographer Marko Brdar’s framing puts us directly in the story, almost as if we’re standing close by and listening in on the private conversations taking place between this family. Marko Ferković’s editing also toys between life and death and keeps us hooked as we watch the tale unfold.

<b>THE GOOD - </b>The three main cast members do a great job with their performances. Marko Brdar's and Marko Ferković's editing are highlights among the technical aspects.<br><br> <b>THE BAD - </b>The script doesn't give us much insight into the characters' lives, often making them feel too distant. The film includes a brief, imaginative break from reality, which is exciting, but then it continues on a conventional storytelling path, which is a bit of a shame.<br><br> <b>THE OSCAR PROSPECTS - </b><a href="/oscar-predictions-best-international-feature/">Best International Feature Film</a><br><br> <b>THE FINAL SCORE - </b>6/10<br><br>"SAFE PLACE"