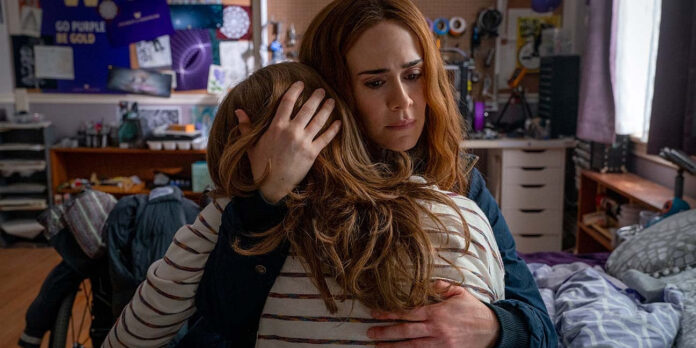 THE STORY – A homeschooled teenager begins to suspect her mother is keeping a dark secret from her.

​​​​​​​​​The famous phrase attributed to Jean-Luc Godard is that all you need to make a film is a girl and a gun. With “Run,” writer-director Aneesh Chaganty amends that statement a little: All he needs to make a film is a girl and a wheelchair. Chloe (Kiera Allen) has lived her entire life as an invalid. Born with a whole host of medical maladies, she is confined to a wheelchair and has to be very strict about her diet and how excited she gets. Her mother, Diane (Sarah Paulson), cares for her nearly all day, every day, making sure she stays healthy and keeps up with her schoolwork. Chloe is a smart, clever girl though, and her pretty perfect little world comes crashing down around her one day when she notices that one of her prescriptions doesn’t have her name on it, but her mother’s.

From there, you pretty much know where “Run” is going to go, but it gets there in the most entertaining way possible. Chaganty and co-writer Sev Ohanian have concocted a corker of a premise, a truly dark coming-of-age story wrapped up in the middle of a tight-as-a-drum paranoid thriller. Nick Johnson and Will Merrick’s mercilessly sharp editing is on display right from the beginning, in a thrillingly put-together montage of a typical day in Chloe’s life. As the film continues and the thriller elements settle in, that editing only gets better and better, especially when combined with Torin Borrowdale’s score. That all of these people previously worked together on 2018’s deviously clever “Searching” shouldn’t be a surprise – that film also made great use of editing and score to put us in the mind of the protagonist, creating a full picture of a life from tiny snippets. The team is working on a bigger scale in “Run” and rises to the occasion spectacularly. A mid-film escape sequence in which Chloe has to use only her wits and her (seemingly significant) upper body strength to MacGuyver her way out of a locked room is a particularly anxiety-inducing high point.

Attention must be paid to Kiera Allen, who makes a smashing feature debut as Chloe. Much of the film rests on her shoulders, as she has to make Chloe’s sudden suspicion of her mom, as well as her quick thinking during moments of panic, believable. Chloe may be incredibly smart and mature for her age, but she’s still a disabled teenager who has been sheltered a lot by her mother, and Allen makes sure we never forget that. She more than holds her own against Sarah Paulson, doing fantastic work in deciding just how much of Diane’s crazy to show us at any given moment. The two have great mother-daughter chemistry, and watching that curdle into something both sadder and more sinister as the film progresses is thrilling in its own way.

Through it all, Allen and Paulson turn in compelling performances, adding sly moments of character work amidst the film’s genre trappings. The film may not venture outside the conventions of the thriller genre, but Chaganty executes them with skillful aplomb, choosing the moments to lean into them with the skill of a gifted showman, sucking the audience into Chloe’s world and not letting us breathe until he’s decided we can. “Run” is the type of film that makes you miss movie theaters, as its most thrilling sequences would only be heightened with a group of people inevitably shouting at the screen, laughing in relief, and applauding a character’s triumph. It’s disappointing that we can’t have that communal experience, but no matter the viewing environment, “Run” is a highly entertaining film, one that never slacks on any front in its quest to keep its audience on the edge of their seats. In fact, watching it may just be the most fun you’ll have watching a film this awards season.