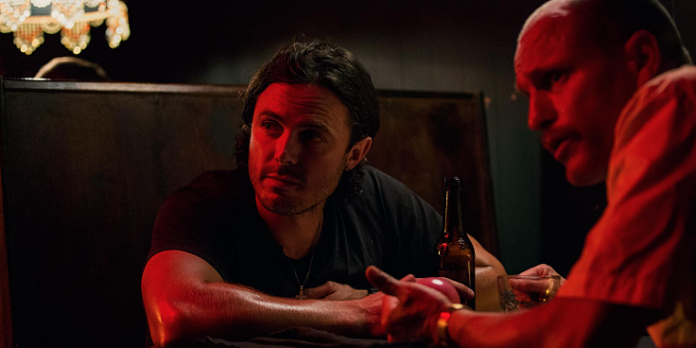 THE STORY – Bullets fly on the Atlanta freeway as armed thieves make their getaway following a bank robbery in broad daylight. Unhappy with the results, ruthless gangster Irina Vlaslov orders the men to pull off another job. One member of the team is Marcus Belmont (Anthony Mackie), a crooked cop who gets saddled with Chris Allen (Casey Affleck), his new but incorruptible police partner. As Belmont and his cohorts lay the groundwork for the heist, they come up with a devious plan to use Allen as their pawn.
​
THE CAST – Casey Affleck, Chiwetel Ejiofor, Anthony Mackie, Aaron Paul, Clifton Collins Jr., Norman Reeds, Woody Harrelson & Kate Winslet

John Hillcoat, the director of acclaimed films such as “The Proposition,”The Road” and “Lawless” is back with another dark morality tale, this time diving deep into the tired cliched world of dirty cops in the modern day thriller “Triple 9.” Fueled by fantastic set pieces and a terrific cast, the film ultimately fails due to its genre trappings from a disappointing screenplay by Matt Cook. It’s an exceedingly dark (visually and metaphorically) film that never seems to deliver a meaningful message to its audience other than to say, some cops are good, and some cops are downright evil. Either way, it’s nothing we haven’t seen before.
​
​Set in Atlanta Georgia during the present day “Triple 9” tells the story of corrupt cops and criminals who are being blackmailed by the Russian Mafia. In order to get paid and get the Russian Mafia (Head by a surprisingly unconvincing Kate Winslet) off of their back, the group has to pull off a series of difficult heists. In order to buy themselves a big enough window to pull off the job, one of the cops named Marcus Atwood (Anthony Mackie) must kill his newbie partner Chris Allen (Casey Affleck) and call in a code 999 (Code for officer down), which will bring in all law enforcement from the city towards their location and cause the distraction.

There is a large ensemble cast here and each one of them is let down by an unfulfilling screenplay that fails to develop their characters and is instead focused on telling the story. It’s though as if each character is a piece on a chess board, each moving to its place so the plot moves forward, but wth no clearly defined roles that help give meaning to the proceedings. Sergeant Detective Jeffrey Allen (Woody Harrelson) plays the overprotective uncle to Chris Allen who is trying to make sense of all of the plot’s moving pieces. Gabe Welch (Aaron Paul) plays the tortured criminal who doesn’t have the stomach for the lifestyle he lives. And Jorge Rodriguez (Clifton Collins Jr.) plays the crooked cop lacking in any good values, so much so that his actions and dialogue become nearly laughable.

Not everything is terrible though in “Triple 9.” First, there is Chiwetel Ejiofor who plays Michael Belmont. He is personally in deep with the Russian Mafia (Particularly Kate Winslet’s character) for reasons that shall remain secret due to spoilers. Suffice to say, he is the only actor in the film who manages to convey any sense of an emotional connection to the audience. And to Hillcoat’s credit, there are a few set pieces that are well staged. The opening heist scene is explosive in its pacing and sense of danger. These qualities are upped later on in the film where Casey Affleck and Anthony Mackie raid a local drug dealer’s house which is not only tense but chaotic in its bloody mayhem.

Unfortunately, the film reaches an emotional climax that resolves a major plot line when there is still another 20 minutes left in the film. The manner in which these final 20 minutes unfold is unsatisfying and lacks any real resonance for the audience. This is all attributed to writer Matt Cook’s lack of any real character arcs and failing to give them any definable features that help us relate to them. Ejiofor (As stated before) is the only exception here, but even he can’t escape the flawed conclusion for his character. One of these days, the right talent will come together to create a dirty cop film which will transcend this genre. Unfortunately, it’s not today.