“RISE OF THE PLANET OF THE APES” 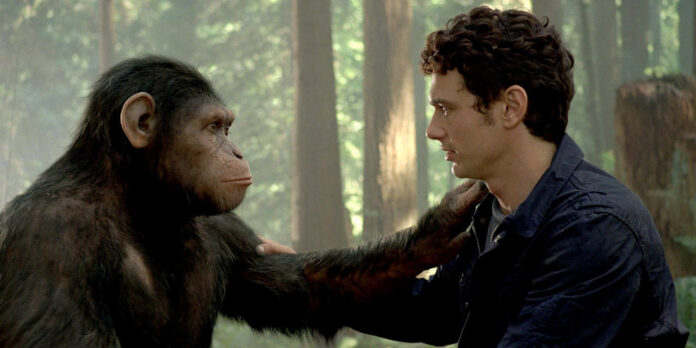 THE STORY – Will Rodman (James Franco), a scientist in San Francisco, is experimenting with a drug that he hopes will cure his father’s (John Lithgow) Alzheimer’s disease. After his work is deemed a failure, Will becomes the guardian of Caesar, an infant chimp who was exposed in-utero to Will’s drug. Caesar displays unusual intelligence, and Will decides to continue his experiments secretly. But as Caesar’s intellect and abilities grow, he comes to represent a threat to man’s dominion over Earth.
​
THE CAST – Andy Serkis, James Franco, Freida Pinto, John Lithgow, David Oyelowo, Brian Cox & Tom Felton

​“Planet of the Apes” is one of the most unique franchises in film history. It kicked off with a universally recognized classic but it also has obscure cult-friendly sequels. It has one of the most detested remakes of all time, yet it has spawned one of the most acclaimed reboots in recent memory. This durability is largely due to the franchise’s allegorical structure. Each film serves as a looking glass into the social mores of their given time period, whether it be animal rights, prejudice, or the relationship between church and state. And nowhere is this looking glass approach more obvious than in 2011’s “Rise of the Planet of the Apes.”

There’s some debate about the specifics of the franchise’s timeline, so all we will say is that “Rise” takes place before the events of the first film. It details the relationship between Dr. Will Rodman (James Franco) and his pet chimpanzee Caesar (Andy Serkis). Rodman is trying to find a cure for Alzheimer’s disease, and his tests have resulted in Caesar having extremely high intelligence. The older Caesar gets, however, the more he comes to realize that his simian brothers are being treated inhumanely, and sets about launching a revolution against mankind.

The script takes the inspired route of humanizing the ape characters while animalizing the human characters. The viewer is made to feel Caesar’s growing discomfort as he realizes his life is dictated by others. He gets taken from his mother at birth; he gets studied around the clock; he gets sent to an animal shelter; none of it is up to him. He’s trapped between child and pet, between man and beast. An early scene illuminates this existential crisis: Caesar goes to the park with Rodman, and though he’s clothed, he’s required to have a leash around his neck. A german shepherd barks at Caesar, and afterward, he signs with his hands that he feels like a pet. He then asks: “What is Caesar?” Rodman’s lack of response validates the chimpanzee’s insecure feelings.

By contrast, the human characters are ruthless and utterly incapable of feeling empathy for their simian counterparts. The opening scene is a prime example as Rodman’s boss (David Oyelowo) condemns all of the apes in the lab to “termination” after an incident with one of the test subjects. Their status as living, breathing animals carry little weight. Then there are the shelter employees (Brian Cox and Tom Felton), who delight in verbally and physically abusing their ape prisoners. It would be remiss to suggest that the humans in the film are three or even two-dimensional characters, but their heightened state helps propel the core theme of mistreatment as well as the importance of preserving animal rights.

It’s impossible to discuss the core of “Rise” without mentioning Andy Serkis’s stunning motion-capture performance. Caesar doesn’t speak until the final third of the film, but Serkis’s deployment of small gestures, pauses, and glances provides us with a fully-realized character arc. Caesar’s tenderness can be heartbreaking, like when he helps Rodman’s father (John Lithgow) hold a fork at the dinner table; his ferocity can be startling, like when he incites the revolution. But the actor makes these disparate actions feel as though they come from the same tortured soul.

Given the film’s prioritizing of monkey over man, it should come as no surprise that the weak spots in the cast are in the latter camp. Freida Pinto is given the thankless role of Rodman’s love interest, and she does little to elevate it. Pinto and Franco’s lack of chemistry doesn’t help either. Then there’s Tom Felton who brings a little too much Malfoy to the role of the sadistic shelter worker. Ignoring the questionable American accent, Felton is a little too cartoonish to register as a genuine threat. The anger the viewer is supposed to feel towards him comes off more like an annoyance.

Those revisiting “Rise,” after the release of two combat-heavy sequels, may be surprised to discover that there’s very little action in the film. The finale sees the newly intelligent apes scale the Golden Gate Bridge to fight policemen, but the bulk of the large-scale mayhem takes place offscreen. This is doubly effective and allows director Rupert Wyatt to focus on the transformation of Caesar from outcast to messiah, making the film as much a Caesar origin story as it is a prequel for “Planet of the Apes.” This keeps the film’s CGI use within reason, the latter a retroactive benefit, for the CGI has aged less gracefully here than it has in subsequent films.

“Rise of the Planet of the Apes” has its flaws, and it ranks as arguably the weakest of the reboot trilogy, but its importance to the franchise cannot be overstated. It proved that there were still compelling stories to be told within the man vs. ape structure, daring to shift the focus from the former to the latter – and the gamble pays off. For a franchise that’s all about evolution, “Rise of the Planet of the Apes” is the filmic equivalent of a missing link.