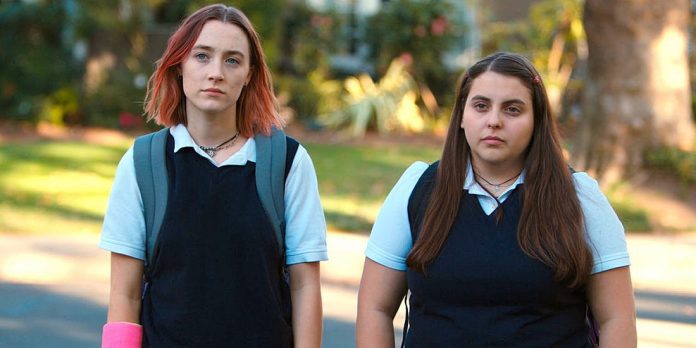 ​​It’s a tough world out there right now. Between coronavirus, quarantine, and stress about the state of the world, every day can be anxiety-inducing. Finding just the right movie to watch can help take your mind off of some of the chaos for a few hours. But how do you find just the right one? I’m here to help. One of my favorite genres to watch during this time of chaos and quarantine is the coming-of-age film. The genre has so many movies full of heart, angst, and a great soundtrack. The next ten films are just a few coming-of-age picks that Netflix, Amazon, and Hulu have to offer.

As Nadine (Hailee Steinfield) attempts to navigate the world of high school, she realizes her best friend is dating her popular older brother. The revelation threatens to tear their friendship apart. “The Edge of Seventeen” is filled with witty one-liners and just the right amount of teen angst. Director/writer Kelly Fremon Craig creates realistic three-dimensional characters who are both humorous and surprisingly emotional as they try to tread the waters of high school.

Is there anything more awkward than the eighth grade? I sincerely doubt it. The universal awkward phase that we all go through in middle school is a cultural phenomenon that binds us. Bo Burnham has taken that awkwardness and put it into a movie chronicling the final days of Kayla (Elsie Fisher)’s eighth-grade year. “Eighth Grade” is the comedian’s directorial debut and it provides plenty of relatable, cringeworthy, and poignant moments that will take you right back to the halls of middle school.

Of course, the ultimate teen movie, “Ferris Bueller’s Day Off.” Admit it, we all wanted to have a day just like Ferris (Matthew Broderick) did at least once. In the times of social distancing, it would be great to get back to a world where we could have a day like Ferris: leading a parade, eating at a nice restaurant, going to a baseball game, visiting an art museum. For now, watching the movie will have to be enough. John Hughes knew how to make a great coming-of-age film. (From “Pretty in Pink” to “The Breakfast Club,” it was his specialty.) The dialogue is quotable; the characters are iconic; the soundtrack still holds up to this day. If you haven’t seen this movie yet, it’s a must-watch right now.

How could this list be complete without this ‘90s classic filled with Boston accents? Will Hunting (Matt Damon), a janitor at M.I.T., is a math genius. To fully excel in his gift, he must seek help from a psychologist (Robin Williams) to cope with his past and succeed in the future. “Good Will Hunting” is a deeply emotional story about grief, trauma, and the importance of personal relationships. Matt Damon and Robin Williams give fantastic performances as Will Hunting and Sean McGuire, a duo that will live on in cinematic history. The screenplay written by Matt Damon and Ben Affleck went on to win the two an Oscar in 1998. “How do you like them apples?”

Where to watch: Hulu

Greta Gerwig’s directorial debut/love letter to sun-drenched ‘90s Sacramento is the ultimate coming-of-age film. “Lady Bird” is built on a razor-sharp screenplay that keeps you glued to each moment. Christine (Saoirse Ronan) is an edgy girl who wants nothing more than to leave Sacramento the second she graduates. During her senior year, she encounters the sweet theater kid Danny (Lucas Hedges) and the edgy guitar playing Kyle (Timothée Chalamet fans everywhere collectively swooned the moment he appeared). She signs up for musical theater and applies to college. These may sound like your typical coming-of-age genre clichés, but the film is set apart by the depth of its female characters. “Lady Bird” is a film exploring the complexities of the mother/daughter dynamic, and it’s got a lot to say.

If you’re looking for an Oscar winner among your coming-of-age flicks, look no further than “Moonlight.” Barry Jenkins broke the film up into three separate chapters following a boy named Chiron, who grows up in Miami and grapples with his sexuality amidst bullying, poverty, and drug addiction. It’s a tense and difficult road for Chiron, but Jenkins directs “Moonlight” with impeccable technical precision. The film boasts gorgeous cinematography and an incredible score by Nicholas Britell.

Somehow I just watched this for the first time this month on Netflix. How have I missed out on it for the last eight years? It was in theaters when I was in high school… Shame on me! (I could have been listening to this soundtrack while learning the living room routine to “Come On Eileen.”) The story follows Charlie (Logan Lerman), a quiet high school freshman hoping to find a place to fit in. Soon, he meets Sam (Emma Watson) and Patrick (Ezra Miller) who show him the highs and lows of teenage life. Just a warning: every character in this film is struggling with something serious whether it be depression, sexual abuse, or an eating disorder. It’s not the most lighthearted teen film. However, it’s a layered film that explores the complexities of high school brilliantly. The tunnel scene set to “Heroes” by David Bowie is a fantastic cinematic moment you won’t be forgetting about anytime soon.

Where were you when Michael Cera had to battle Captain America and Captain Marvel to date the Huntress? Things might go down a little differently in “Scott Pilgrim vs. the World,” but you will be shocked at the number of stars (including Brie Larson, Chris Evans, Aubrey Plaza, and more!) who show up in this clever and stylistic video game-inspired film. When Scott Pilgrim (Cera) meets Ramona Flowers (Mary Elizabeth Winstead), he believes he’s finally found the one, but for the two to be together, Scott has to defeat her seven evil exes. This is a wildly witty and fun film by Edgar Wright.

Spider-Man is a great coming-of-age story in general. Teenager gets bitten by a radioactive spider and turns into a superhero? That’s what I call entertainment! Sony kicked it up a notch with “Into the Spider-Verse.” After teenager Miles Morales is bitten by the radioactive spider and turns into Spider-Man, he realizes other people have the same powers as him. With his newfound powers, he must take down a villain who tries to open up portals to other worlds. Everything from the animation to the voice cast to the humor in “Into the Spider-Verse” is excellent. It’s a compelling animated film for all ages.

Before the days of “Stranger Things” and the revamped “It” franchise, “Super 8” brought back the “teens on bikes investigating supernatural occurrences” genre. The film takes place in 1979 as a group of friends witness a catastrophic train crash and investigate the strange events that follow. J.J. Abrams’ film contains a great mix of sci-fi, humor, and heart, showcasing friends who have a passion for making movies in the summer of ’79. “Super 8” functions as a great source of nostalgia with references to films of the ‘80s like “E.T.” and “Stand By Me,” but don’t worry, there’s plenty of originality to be found in this blockbuster.

Where to watch: Hulu and Amazon Prime

Also, don’t forget that on May 1st, Netflix will premiere a brand new coming-of-age film called “The Half Of It” about Ellie Chu, a teenage girl who agrees to help write a love letter for the school jock. She doesn’t expect to become friends with him, and she really doesn’t expect to fall for his crush. We may be stuck inside, but that doesn’t mean there won’t be new content.

I hope everyone is staying safe out there! What are your favorite coming-of-age movies? Let us know your thoughts in the comments section below or on our Twitter account.