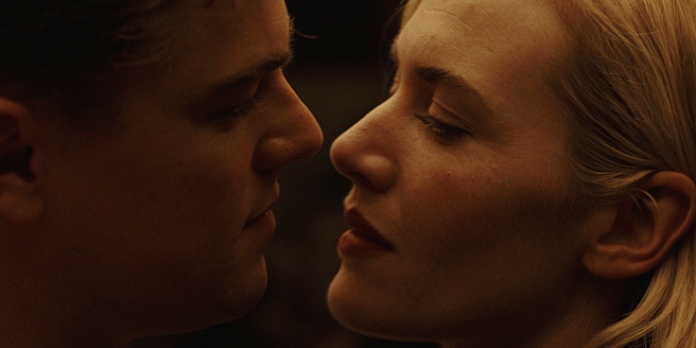 THE STORY – Frank (Leonardo DiCaprio) and April Wheeler (Kate Winslet) always see themselves as far-removed from the conventionality of suburbia. Yet that is exactly what creeps up on them when they buy a house in Connecticut. He toils 10 hours a day in a job he hates, while she, as a 1950s homemaker, yearns for fulfillment and passion. Rebelling against the torpor of their lives, the couple plan an escape that may push them to their limits.
​
THE CAST – Leonardo DiCaprio, Kate Winslet, Michael Shannon, Kathryn Hahn, David Harbour, Kathy Bates & Ty Simpkins

​Based on the 1961 novel of the same name by Richard Yates, “Revolutionary Road” re-teams the “Titanic” romantic on-screen duo of Leonardo DiCaprio and Kate Winslet. Where before they were doomed lovers due to a historical event that claimed hundreds of lives, this time, they are doomed lovers due to societal expectations and their own beliefs of the American dream. Kate Winslet’s husband, Academy Award winner Sam Mendes (“American Beauty”) directs this powerful, thought provoking yet sometimes overbearingly grim adaptation.

Taking place in the 1950’s, “Revolutionary Road” follows the marriage of Frank (Leonardo DiCaprio) and April (Kate Winslet) Wheeler. Their early days of happiness are told via flashback while the present day marriage is currently under a lot of strain. April has come to the realization that both she and Frank gave up on their dreams and ambitions in life in order to buy into what was back then considered “The American Dream” (A big house with kids in the suburbs). Frank is working a job he cannot stand selling machinery in New York City while April stays at home taking care of their two children. Both of them feel trapped, that is until April decides that the family should permanently move to Paris in a final ditch effort for the once happy couple to truly feel alive again.

Both Frank and April are not written (Adaptation by Justin Haythe) to be multidimensional characters with specific personalities. They are the embodiment of the audience’s own feelings towards that emptiness and hopelessness that the film alludes to when you have to compromise to satisfy society’s expectation of you. Sam Mendes wants the audience to project themselves onto these characters and Haythe succeeds in doing so by writing Frank as a character who is losing his own identity while April is trying to conceal hers.

It’s not until the couple receives a visit from the Givings family’s (Richard Easton and Kathy Bates) son John (Played wonderfully by Michael Shannon) that certain truths beneath the surface of fake etiquette begin to unravel. John has recently been released from the mental hospital and is perceived to be insane by those around him when he is most likely the sanest person in the film. He speaks what is on his mind and doesn’t put up a mask of conformity. Shannon sells it beautifully, and thus acts as the match which sets off the ticking time bomb that is the marriage of the Wheelers.

11 years after they captured the hearts of audiences worldwide, Leonardo DiCaprio and Kate Winslet give us a glimpse into a potentially dark direction Jack and Rose’s relationship could have taken had they both survived the Titanic sinking. Both of them are absolutely fearless here expressing a wide range of emotions and fully conveying the subtleties which lie beneath every marriage. DiCaprio is conceited, prideful, and neurotic towards his desires to be considered a man (His young boyish looks lend to this credibility). He falls, as a victim of society while his wife suffers as a victim from him. In April, Winslet gives (Under the direction of her own husband) own of her most tormented and layered performances as the trapped housewife who is no longer willing to play by the “rules” that the times have imposed on her and wants real change not just for her marriage but for herself. It’s a two-hander where neither side overpowers the other. Surely audiences may relate to one character over the other and inevitably choose a side, but the material (All though bordering on theatrics a little too much towards the end) lends itself well to two actors of this high a caliber.

Mendes takes a step back after “Jarhead” and “Road to Perdition” and brings us a drama which shares similarities with his debut film “American Beauty.” While not as enjoyable an experience as that film was, Mendes uses his theater experience to stage the conversations and arguments inside the Wheeler house like a play. It may not be the most cinematic achievement of his career, but it’s certainly one of his most dense works filmed gracefully by Roger Deakins and scored with frailty by Thomas Newman. “Revolutionary Road” may prove too bleak for some. However, it’s more than likely those are the ones the film is trying to reach out to reminding them that they’re not getting any younger, and it may (or may not) be too late for them.