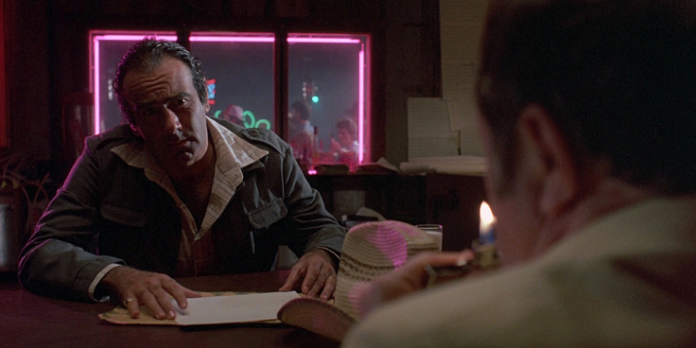 ​THE STORY – Abby (Frances McDormand) is cheating on her saloonkeeper husband, Marty (Dan Hedaya). The object of her affections is Ray (John Getz), one of Marty’s bartenders. Marty hires Visser (M. Emmet Walsh), an unscrupulous detective, to kill them. But Visser has other, more lucrative plans of his own. So begins a calculating round of double and triple crosses that build to a bloodcurdling, surprise-filled climax.
​
THE CAST – Frances McDormand, John Getz, Dan Hedaya, M. Emmet Walsh & Samm-Art Williams

THE TEAM – The Coen Brothers (Directors/Writers)

​The Coen Brothers have been making films since the 80’s. Although they did not get extremely popular with audiences until the 90’s, they raised enough money in 1984 to release their debut film “Blood Simple.” Recently re-watched on the Criterion Collection, the film is exactly as its title suggests, simple. It’s not revolutionary nor does it present anything new, especially if you are familiar with the Coen Brothers other films. Many of the aspects which helped to give this film praise in 1984, the writing and directing duo have perfected in the years since but that does not stop “Blood Simple” from being an entertaining and bloody affair.

A rich bar owner named Julian (Dan Hedaya) has discovered through a private investigator (Investigator Loren Visser played tonally well by M. Emmet Walsh) that his wife Abby (Frances McDormand) is having an affair with one of his employees named Ray (John Getz). Overcome with anger and a desire for revenge, Julian hires the same investigator to kill his wife and her lover. What Julian does not expect nor can he predict is that when blood is involved, a job such as this is never exactly simple as twists and mayhem follow in the Coen Brother’s debut feature length film.

The Coen Brothers employ a dark humor in this film which permeates its way throughout the film. Their use of the neo-noir style provides some beautiful shots despite this being their debut film. Barry Sonnenfield helps to give the film a unique look that pays homage to the noir films of the past with heavy shadows infused with neon lights from Julian’s bar that make their way into other shots in the film to give it quite the beautiful palette. Carter Burwell provides a catchy piano theme that is simple and does a good job of setting the mood for the film. The way in which the story is told so bluntly and hard-boiled with little in the way of subtext adds to the fun that this film provides as all of the characters are caught up in this violent cat and mouse game of murder and betrayal.

Francis McDormand made her acting debut with this film and she emerges as the hero of the film but the real stand out is character actor M. Emmet Walsh who relishes in his character’s hard accent and eccentrics to create a terrifying character. Dan Hedaya is also quite brooding and good in his considerably less screen time. I would have liked to have seen more of him in the film. John Getz plays Ray and he might be the most boring character in the film in the way he is written and played but to be fair, nobody does a bad job with what they’re given here.

A simple story, a simple setting, a simple movie. But with the Coen Brothers, nothing is ever simple as they manage to take a genre which has been done to death and put their very own unique spin onto it. The now multiple Academy Award winning duo would go on to perfect their style they introduced to the world with “Blood Simple.” As varied as their career has been, from the dark humor to the unsuspected violence, to the southern charm and extraordinary situations these ordinary characters find themselves in, one can say it all started with “Blood Simple.” The film shows signs of its age in how it is presented, but for a straight forward low budget neo-noir thriller, it’s still a good time all of these years later.