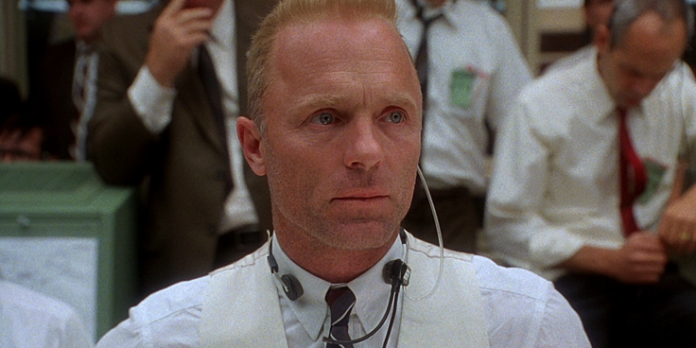 “It’s the best part of each one of us to believe that anything is possible,” says Jim Lovell (Played by American everyman, Tom Hanks) in Ron Howard’s thrilling true story of the failed Apollo 13 mission. The film has a sense of awe and wonder, at not only what we achieved in the early days of the space race, but what we can accomplish as a species when we work together. Told with remarkable detail (Even though some moments are dramatically enhanced), and a documentary-like realism, “Apollo 13” may very well be the best film of Ron Howard’s career.

The year is 1970. NASA is about to launch the seventh manned mission in the Apollo space program, and the third to land on the moon. Commander Jim Lovell (Hanks) leads the crew of three which consists of his friend and Lunar Module Pilot Fred Haise (Bill Paxton), and their last minute backup Command Module Pilot Jack Swigert (Kevin Bacon). Their original pilot Ken Mattingly (Played by Gary Sinise) is left on Earth due to an impending illness of the measles. He is left behind with Lovell’s loving yet worried wife Marilyn Gerlach Lovell (Kathleen Quinlan), and the tough as nails yet optimistic, White Team Flight Director over in NASA Gene Kranz (Ed Harris). All seems to be going well on the mission to the moon until one of the ship’s oxygen tanks suddenly explodes. What was originally supposed to be the greatest experience of the crew’s lives, turns into a ticking clock of continuous problems, which must be solved in order for them to return safely home.

“Apollo 13” is an almost perfect film. The scenes that take place at home for Jim Lovell with his wife Marilyn are not as well written as the scenes which take place at NASA and in space. Kathleen Quinlan does what she can with the role, but it’s a one-note performance of the long-suffering wife, who is worried about her husband’s safety. All she can do is stand by and watch the television monitors as the crew and the people at NASA take action to help her husband and his crew get home. However, once the action starts happening in space, there is nothing else quite like it. The mental toughness of the crew is tested as they solve each new problem that arises (Low oxygen, too much carbon dioxide, sub-zero temperatures, not enough power, etc.). They are aided with the help of the men and women working on the ground at NASA, including Ken Mattingly and Gene Kranz. Unfortunately, (Like Mrs. Lovell) all of the film’s characters come second to the plot and the re-telling of the true events that took place. Tom Hanks plays the commander who is cool under pressure, Kevin Bacon likes women, Bill Paxton gets sick, etc. Ed Harris seems to be the only one who has a fully fleshed out character and gives the best performance in the film as a result. He plays a man who refuses to give into despair, despite all of the overwhelming odds against him and his team. He convinces those around him (And the audience) that they must “… work the problem. Let’s not make things worse by guessing.”

Despite the one-note characters and the lack of drama at the Lovell house, “Apollo 13” excels due to its earnestness and technical accomplishments. The visual effects are epic in their scope, but it was at Ron Howard’s request that the actors be shot in camera under zero gravity conditions to accurately portray what it must have been like for these guys in space. Couple that together with brisk editing that keeps the pace constantly moving, terrific sound work and an above average score by James Horner, and you’ve got a film which engages. As stated before, the moments of drama at the Lovell household (Wedding ring down the drain? A nightmare sequence of impending doom?), may make a more cynical audience member balk in disgust at the tired plot conventions used by Howard and his pair of writers to up the tension.

However, this is a crowd-pleasing film. When you witness the men on the ground at NASA using older computers, pen and paper and sometimes nothing but the sheer tenacity to accomplish the seemingly impossible, how can you not be inspired by their efforts? When you have Ed Harris spewing lines such as “I think this is going to be our finest hour,” how can you not be motivated to face similar circumstances with such heroism? The men who risk their lives to explore the vast reaches of space are our heroes. With the level of training involved in the space program, along with the billions which were invested, and the bright optimistic men and women who made it all possible, it’s a shame that space exploration (Ever since we used it to one-up the Russians) is not being used more today. Lovell asks at the end of the film, “When will we be going back and who will that be?” Perhaps, Ron Howard’s greatest achievement with this film may be to inspire us to answer that question and encourage younger audiences to gaze in wonder at the potential that space exploration still has to offer us.