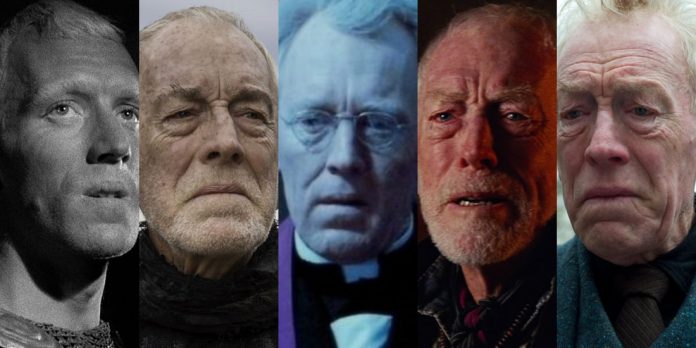 By Bianca Garner
​
On Monday we lost one of cinema’s most iconic actors, Max von Sydow. This was the man who took on the demon Pazuzu, who played chess with Death, gave advice to Bran Stark as the three-eyed raven, aided Robin Williams and Cuba Gooding Jr. on their journey into hell, and even crossed paths with Kylo Ren and the First Order. No role was too big or too small for von Sydow. And even when he was on screen for the briefest of moments, he would leave a lasting impression.

In a career spanning six decades, von Sydow represented different things to different people. To cinephiles he was Ingmar Bergman’s muse, starring in 11 films by the great Swedish director. To those who grew up watching the films of the ‘70s and ‘80s, he was the character actor who popped up in films such as “Three Days of the Condor,” “Dune,” and “Hannah and Her Sisters”. For those who grew up in the ‘90s and early ‘2000s, you would probably recognize him from films such as “Judge Dredd” and “Minority Report”. Despite his long career in both television and film, he was only nominated for an Oscar twice: first in 1987 for “Pelle the Conqueror” and in 2011 for “Extremely Loud & Incredibly Close”. Sadly, he left empty-handed on both occasions.

Born in 1929 to parents Carl Wilhelm von Sydow and Baroness Maria Margareta von Rappe, Max didn’t start off with the name “Max von Sydow,” his actual name was Carl Adolf von Sydow. His interest in acting and performance developed after seeing a production of “A Midsummer Night’s Dream” which sparked something in him and even led him to set up an amateur drama group with his school friends. Von Sydow served for two years in the Swedish military, and after seeing a flea circus, he decided to adopt the name “Max” from the star performer. After completing his service, he studied at the Royal Dramatic Theatre in Stockholm from 1948-51. It was here where he made his first on-screen performances in two of Alf Sjöberg’s films: “Only a Mother” (1949) and “Miss Julie” (1951).

After graduating in 1951, he became an actor at the Norrköping-Linköping Municipal Theatre where he starred in nine plays. In 1953, he moved to the Municipal Theatre in Hälsingborg where he starred in 11 plays and gained critical recognition for his work. However, his life changed completely in 1955 when he moved to Malmö City Theatre and crossed paths with the auteur, Ingmar Bergman, who was the chief director of the theatre at that time. Bergman cast von Sydow as the disillusioned knight Antonius Block in his film, “The Seventh Seal”. In the film’s most iconic scene, we watch Block encounter Death (Bengt Ekerot) on the beach of Hovs Hallar. Knowing that his life has come to an end, Block challenges Death to a chess match believing that he can survive just as long as their game continues. Even if you haven’t seen “The Seventh Seal” I guarantee that you’ll be familiar with its opening scene.

Von Sydow would go on to feature in several more Bergman films including “Wild Strawberries” in 1957, “Brink of Life” and “The Magician” in 1958, “The Virgin Spring” in 1960, followed by “Through a Glass Darkly” in 1961, and “Winter Light” in 1963. It’s hard to determine which one of these films contain his best performance, but his appearances in two key films from this time spring to mind: “The Virgin Spring” in which von Sydow plays a vengeful father of a girl who has been raped and murdered, and “Winter Light” where he plays a pastor in a small rural village dealing with an existential crisis and his loss of faith. Perhaps one of his more overlooked performances from his work with Bergman is in the 1968 film “Hour of the Wolf,” a psychological horror where von Sydow plays a painter dealing with insomnia and haunting visions.

For years, von Sydow refused film offers that tried to lure him outside of Sweden including the titular role in “Dr. No” in 1962. However, in 1965, he decided to take on Hollywood and starred as Jesus in George Stevens’ biblical epic, “The Greatest Story Ever Told”. Roles in John Huston’s “The Kremlin Letter” (1969) and Jan Troell’s “The Emigrants” (1971) gave von Sydow the right material to work with and perfectly suited his acting style.

Von Sydow took on Death yet again in 1973 when he starred as the character of Father Lankester Merrin in William Friedkin’s highly controversial masterpiece, “The Exorcist”. Friedkin’s film opens with Father Merrin discovering an amulet that resembles Pazuzu, and then after the first few minutes, von Sydow disappears completely, only to reappear halfway through the film to assist with the exorcism. Despite losing to Pazuzu, the character of Merrin was brought back in the form of flashbacks in the sequel 5 years later.

The 1980s was a strange decade for von Sydow. He popped up in a range of different pictures including cult classic “Flash Gordon” (1980) as Ming the Merciless; in the epic sword and sorcery film “Conan the Barbarian” (1982); in David Lynch’s epic flop “Dune” (1984); and appearing in Woody Allen’s “Hannah and Her Sisters” (1986) as Barbara Hershey’s much older partner. By the end of the ‘80s, von Sydow was back on top form in Bille August’s award-winning film, “Pelle the Conqueror,” in which von Sydow was nominated for best actor, only to lose to Dustin Hoffman for “Rain Man”.

In 1988, von Sydow tried his hand at directing with the likes of “Katinka”. (Although von Sydow was said to have been glad to have made it, he went on record to say that he would never direct again.) The ‘90s and 2000s saw him appear in many mainstream Hollywood films, working with directors such as Penny Marshall for “Awakenings” in 1990, Steven Spielberg for “Minority Report” (2002), and Martin Scorsese for “Shutter Island” in 2010. Von Sydow would also appear in several European films such as “The Diving Bell and the Butterfly” (2007) in which he appears for two brief scenes where he steals our attention away from Mathieu Amalric. He would even lend his iconic voice to the world of video games by voicing a character in “The Elder Scrolls V: Skyrim”.

When asked about his process of choosing roles, von Sydow replied back with, “I don’t have a philosophy for choosing roles. Sometimes, it’s just, ‘This might be interesting; that might be fun to do.’ And then sometimes, you need the money.” Looking back on von Sydow’s magnificent career, it’s hard to imagine anyone else in these roles – even if some of his roles were just for the money. He always managed to bring so much depth to them. We truly believed that he was a silent recluse that helped a young boy confront his fears, a priest trying to rediscover his faith, a sinister doctor trying to “cure” Leonardo DiCaprio, and a sixteenth-century tyrant trying to take possession of an infant. He will be truly missed. And, if there is indeed an afterlife, well I would like to imagine that he is on some beach somewhere catching up on a game of chess with Bergman.

What are some of your favorite roles from Max von Sydow? While he never received an Oscar, is there a performance you would’ve given him the win for? Let us know your thoughts in the comments section below or on our Twitter account.