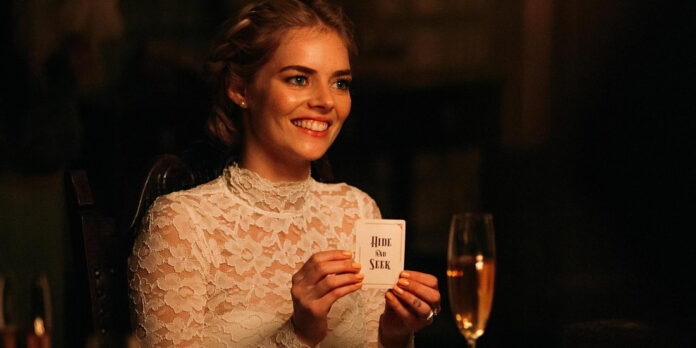 THE STORY – Grace couldn’t be happier after she marries the man of her dreams at his family’s luxurious estate. There’s just one catch — she must now hide from midnight until dawn while her new in-laws hunt her with guns, crossbows and other weapons.
​
THE CAST – Samara Weaving, Adam Brody, Mark O’Brien, Henry Czerny & Andie MacDowell

​​​Ready or not, here comes “Ready Or Not,” a no-holds-barred, silly and in your face entertaining horror thriller from the creative minds behind “V/H/S” and “Southbound.” This macabre, endlessly hilarious and self-aware b-level film, knows exactly what it is and gives the audience exactly what it wants. There’s suspense, gore, jump scares, twisted twists and more. With elements of “Heathers,” “You’re Next,” “Get Out” and more heavily featured throughout with a cast who look like they’re having a blast with the movie’s fun and demented premise, this simple movie, based around a simple game is some of the most fun genre fans will have at the movies this year.

It’s the day that Grace (Samara Weaving – who some may recognize as Penelope from “Three Billboards Outside Ebbing, Missouri“) has always dreamed of: her wedding day. After 18 months of courtship, she is marrying Alex Le Domas (Mark O’Brien) which will effectively make her an addition to the Le Domas Gaming Dominion (as they like to be called). A wealthy family who have made their fortune through various forms of gaming, the family doesn’t know whether to accept Grace openly or gossip over whether or not she is trying to marry into the family for the money. It doesn’t matter though, for after the young couple is pronounced man and wife at the family’s estate, they are invited to the game room where the rest of the family have gathered for a very specific purpose.

Any time an outsider joins the Le Domas family, they must place a game on the night of their wedding. It’s a family tradition with a twist. Should Grace pull one specific card amongst many from a mysterious box, the game will not be a harmless match of chess or checkers. No, instead, it will be something much more fatal. Lo and behold, Grace chooses the card and is under the pretense that it is just a harmless game of hide and seek in the vast mansion. Should she stay hidden till morning, she wins. However, unbeknownst to Grace, the Le Domas family believes that a curse will befall their family if they don’t kill Grace before sunrise. Armed with Civil War weapons from their great grandfather’s time and with inexperience in how to actually go about murdering someone, the family all remain blindly loyal to their superstition and set off to find and murder Grace before they all get killed themselves. Let the game begin!

Beginning with a pure white wedding dress and ending tattered and torn, beaten, muddy and bloody, Samara Weaving’s breakout leading role will surely catch the eye of many and land this promising young actress (the niece of actor Hugo Weaving) more roles. She is feisty, smart, believable and a wonderful protagonist to follow on this game of survival.

The entire ensemble comes to play though in “Ready Or Not,” as the supporting roles led by patriarch Tony Le Domas (Henry Czerny) and his wife Becky, played by Andie MacDowell, are all game to take some fun in the proceedings. Filled with dark humor, over the top moments and a sinister edge, while still wrestling with their humanity, the Le Domas family are sometimes conflicted in their decision to kill Grace yet remain mostly committed. This is especially apparent in Adam Brody’s character Daniel, the brother of the groom, who still wrestles with the psychological ramifications from the last time his family partook in the barbaric ritual as a child. His character’s doubt over what the family is doing and whether or not there even is a curse provides the film with some of its best emotional moments (and some truly suspenseful moments where you don’t really know which direction the story will take) while the rest of the family’s confusion as to how to use the outdated weaponry, resulting in accidental deaths, is an absolute riot.

“Ready Or Not” provides a lot for such a condensed runtime and stripped down narrative. It’s thrilling, darkly comical, surprisingly emotional and stuffed with some clever twists in the story, all the while never losing sight of the character’s human desires to survive, be accepted and loved by family. Touching upon those familial values, class, superstition, trust and the perils of marriage, “Ready Or Not” supplies enough emotional heft to invest its audience in its whacky and unbelievable premise. It certainly won’t be for everyone (especially by the time it reaches its explosive bloody ending) but for genre fans who especially adore a good bit of absurd comedy mixed in with their genre thrills and buckets of gore, this is one film worth marrying into.