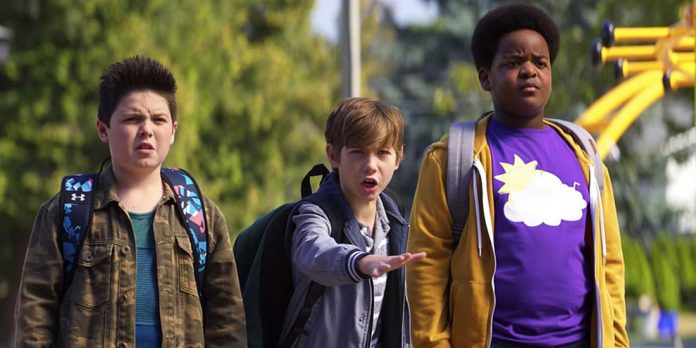 ​​​Up until recently, the coming-of-age film has remained constant since the 1970s. It usually features teenagers of all cliques that range from the jock all the way down to socially awkward as they navigate those stressful years. A coming-of-age tale can work in any genre which makes the trope one of the most versatile in all of modern-day cinema. It can be seen in comedies, dramas, and even action movies (spider-man, I’m looking at you). The underlying theme is that these characters realize that they are all going through something similar to another character in the film. This realization causes the character to experience a type of growth that will catapult them into the next stage of their lives; typically, from teenager to young adult.

But, the generic coming-of-age film, the most versatile trope in cinema, almost always has one thing in common: teenagers. It is the obvious choice to set one’s film about growing up in a high school surrounded by sixteen, seventeen, and eighteen-year-olds where their latest catastrophe is that their crush doesn’t like them back. It makes sense: high school is brutal where everything is not what it seems. People are best friends with you one day and hate you the next, there’s the ever consuming pressure to be ‘cool’, and then the hours upon hours of actual school work. In high school, you feel as if you’re at war and can’t tell your parents why you hate your best friend from preschool because they just wouldn’t understand. High school is rough. So it makes sense why most films about growing up take place in this world. But within the last two years, there has been a new wave of coming-of-age films where directors are shifting the playing field. Instead of centering their story around hormone-filled, anxiety-stressed teenagers, they’re centering them around pre-teens in middle school.

The latest to tackle this community is “Good Boys,” the raunchy comedy about three sixth graders (Jacob Tremblay, Keith L. Williams, and Brady Noon) where 12-year-old Max (Tremblay) is invited to his first kissing party. The Seth Rogan produced film is rated R and features the three tweens cursing, accidentally carrying drugs, and getting into a fistfight with a college fraternity. But even with all of the absurd comedy the film also tackles bullying, consent, and the three boys adjusting to the sudden change of elementary school to middle school.

Up until last year, the middle school was a setting that no director has gone. If featured, it was normally in a film directed towards actual middle schoolers (“Diary of a Wimpy Kid” & “Alexander and the Terrible, No Good, Very Bad Day”), but never actually portrayed what middle school was like looking in, which is a perfect environment for a coming-of-age story. When looking at it, middle school is much scarier and more awkward than high school. For the first time in their lives, these children are going to school with different people, in a different environment where everything is changing. Their bodies are changing, their personalities are changing, and their interests are changing.

Some kids want to grow up as fast as possible, as the boys in “Good Boys” do. They want to drink, they curse at any opportunity they get, and want to be the first person to have a girlfriend. One of the dilemmas in “Good Boys” is that the main characters need to learn how to kiss before they go to the party, otherwise they’ll be socially ostracized for the rest of their public school days. Especially with the internet and social media, children are growing up much faster than any generation since they have an unlimited amount of resources at their fingertips. But others just want to stay the way they are and get overwhelmed by the abrupt change in their peers. All of a sudden, your friend is interested in the opposite sex and less interested in the games you used to play when you were younger. Your best friend might be going down a path that you don’t want to follow.

Last year, arguably one of the first middle school coming-of-age film, “Eighth Grade,” was released and struck a chord with its audience. The film centers around an awkward girl during her last week in middle school. For the first time, film accurately showed what it was like to be walking in the halls of any middle school in the modern world. It’s scary and constantly changing with people on completely different tracks. At least in high school, everyone is on the same page and knows which group they belong to. It’s much scarier when you’re still trying to figure that out.

With “Good Boys,” “Eighth Grade,” and even “Stranger Things,” the coming-of-age trope is potentially experiencing a Renaissance. Sixth, seventh, and eighth graders are finally getting the treatment that high schoolers got for the last 30 years. With this new bubble of middle school-set films, directors are now able to accurately portray the most uncomfortable years of an individual’s young life. The world of middle school hasn’t really been explored in film and is rich with potential. Middle school is overwhelming, full of opportunity, scary, ever-evolving, and awkward. Luckily, awkwardness tends to make really great comedy which could make “Good Boys” the summer’s surprise hit.

Have you seen “Good Boys” yet? What did you think? Do you think we’ll see more coming-of-age movies produced centered around middle schoolers? Let us know your thoughts in the comments section below or on our Twitter account.