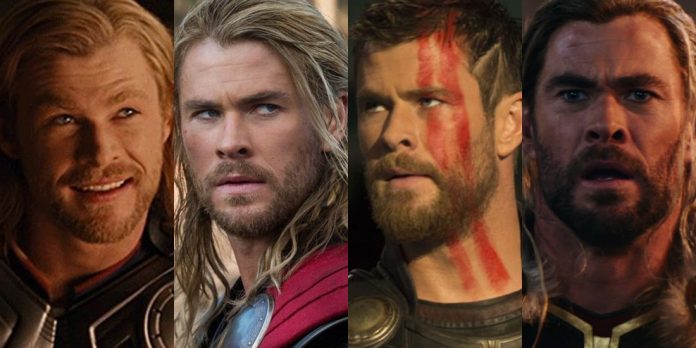 By Danilo Castro ​
​
Despite being (self-)described as the “strongest Avenger,” Thor Odinson (Chris Hemsworth) spent the first two phases of the MCU bringing up the rear. He was jockish and charismatic in the team films, but you’d have been hard-pressed to find someone who preferred his solo franchise to that of teammates Tony Stark and Steve Rogers. And everyone just seemed to accept it. “Thor is boring on his own” was the default take, along with the dubious honor of being the franchise with the most reviled MCU release. Whether it deserves its reputation or not is beside the point; “Thor: The Dark World” is the metric by which all disappointing MCU films are measured, and that is a tough hole for a franchise to dig itself out of. But something strange happened. Thor, by virtue of the man who played him and the filmmakers around him, turned things around. The character Roger Ebert, once mocked for being a dim bulb, became the hottest thing in the MCU and the last (original) Avenger standing. It is an underdog story fit for a comic book, and it’s taken over a decade to unfold. Let’s figure out how this metatextual metamorphosis happened.

The original “Thor” (2011) is an adequate film. Nothing more, nothing less. It does sometimes suffer from the assembly line quality that later MCU films would be accused of, but given how early it was released, it’s clear the assembly line was still being perfected. Kenneth Branagh seemed an obvious choice to direct from a narrative standpoint (the film basks in Shakespearean grandeur whenever it is set in Asgard). Still, he was ill-suited to the fish-out-of-water/sci-fi adventure/romance the film tries to be once Thor is banished to Earth.

You’ll notice how many descriptors I crammed into the previous sentence. “Thor” is trying to do too much. It settles for being a jack of all genres (and camera angles) but a master of none. It’s a shame, too, because the fish-out-of-water element spotlights Hemsworth’s comedic talents. He quickly recognized the importance of humor when it came to humanizing a literal god, and the best scenes allow him to shine by taking pratfalls and smashing coffee mugs. They are a little incongruous when placed next to the generic, CG-laced finale, but then again, incongruity has been an issue for most of the weaker MCU releases. (I do want to mention that “Man of Steel” [2013] steals a ton of elements from “Thor” and never took criticism for it. The tenacious love interest, the hero’s struggle to embrace his power, the bearded dads played by Oscar winners, the red capes, and the fight with a villain from the hero’s home plane that takes place in a small town. “Thor” flew so that the “Man of Steel” could also… fly. Kal-El fans should put respect on Odinson’s name. Anyway, tangent over).

“Thor: The Dark World” (2013) was poised to be the shot in the arm the franchise needed. The character was positively received in “The Avengers” (2012), which meant that more eyes would be on him in the next solo film. The rolodex of possible directors was exciting as it was fast-moving, with Branagh, Brian Kirk, and Patty Jenkins all being attached at one point. The departure of Jenkins was the most disheartening for fans, and her citing of “creative differences” marked the first time a director ran afoul of the MCU house rules. It wouldn’t be the last.

The production woes on “Thor: The Dark World” are too lengthy to cover in their entirety here, but the one that’s suddenly more relevant is the handling of Dr. Jane Foster (Natalie Portman). The character was set to be an enormous part of Jenkins’ film, but her departure brought about rewrites, and by the time Alan Taylor came on to direct, the character was little more than a vessel for the Infinity Stone plot. Portman, who was keen on working with Jenkins, made it clear that she was unhappy with the final product.

I can’t say I blame her. “Thor: The Dark World” is just good enough not to be terrible. It’s the C- film you forget exists until you see it on television. And by ‘see it,’ I mean you acknowledge it playing before you change the channel. Taylor and company learned all the wrong lessons from the first film, toning down the ensemble chemistry and dialing up the mawkish galactic melodrama. Malekith (Christopher Eccleston, collecting a paycheck) is an absolute snoozer of a villain, and the pacing was a couple of shock charges short of showing any signs of life. By the time we get to the legitimately cool final battle (where Thor and Malekith bash each other through different space portals), the stakes are so anemically set up that they barely register (However, I do applaud the MCU’s decision to retroactively add heat to “Thor: The Dark World” by making it a puzzle piece in “Avengers: Endgame” [2019]. It doesn’t make the film better, but it does justify its importance in the overall canon).

The film grossed more than the original but was universally panned by critics and fans. The studio took notice. Eight MCU films were released in the three years following “Thor: The Dark World,” and none bore Thor’s name. We cheered on Winter Soldiers, The Guardians of the Galaxy, and Ant Men, while quietly accepting that the God of Thunder had gotten his thunder stolen by these eccentric newcomers.

Enter Taika Waititi. The eccentric director was asked to pitch an MCU film without using sizzle reels or pop songs, so he proceeded to pitch “Thor: Ragnarok” (2017) using a sizzle reel and Led Zeppelin’s “Immigrant Song.” The studio loved it. Waititi embodied everything the previous films lacked; cohesion, color, flair, and the understanding that everybody loves goofball Thor. The alchemy of Waititi’s writing and Hemsworth’s timing was evident from the opening scene, where an unrattled Thor sits in a cage and chronicles his life to a nearby skeleton.

“Thor: Ragnarok” cracked the code on Thor by pulling the Shakespearean family drama down to Earth (literally and figuratively). Thor’s relationship with his brother Loki (Tom Hiddleston) and father Odin (Anthony Hopkins) never quite hit the way they should, but here, with the benefit of screen time and audience familiarity, they carved out an emotional core that resonated throughout the narrative and CGI mayhem that follows. It doesn’t hurt that “Thor: Ragnarok” features some of the best CGI mayhem in the entire MCU. Waititi has a singular perspective, and his wonderfully vivid tastes can be gleamed in every frame, from the Gladiator battle gone wrong to the neon color palette that nixes the drabness of the previous film while tipping the cap to the director’s 80s influences (“Flash Gordon” [1980], “Big Trouble In Little China” [1986]).

Waititi cleverly retools the fish-out-of-water schtick from the original film by dropping Thor onto a planet that makes Earth look civil by comparison, and the results are hysterical. Hemsworth masterfully toes the line between corny and cool, while his chemistry with the uptight Hulk (Mark Ruffalo), the unimpressed Valkyrie (Tessa Thompson), and the aforementioned Loki result in some of the MCU’s sharpest banter. I would legitimately watch these four go on dozens of adventures together. Korg (Waititi, making the absolute most of a vocal cameo) can also come.

“Thor: Ragnarok” outgrossed the first two films, but more importantly, it delivered on a half-decade of untapped potential. When Thor sparks his lightning power and demolishes henchmen to a Zeppelin riff, the satisfaction is twofold: we’re watching a character and a franchise stick the landing simultaneously. That landing couldn’t have come at a better time. The rejuvenated star power of Thor would go nuclear with his scene-stealing turns in “Avengers: Infinity War” (2018) and “Avengers: Endgame.” He was an unrelenting badass in the former and a broken soul in the latter, proving that there was much more to the man than his hammer.

“Thor: Love And Thunder” (2022) shows us much more. Waititi, Hemsworth, Thompson, and, now, Portman are back, giving the film a sense of cumulative growth. It’s a film that looks back on and reframes the past while at the same charting a new path for its titular hero. Once more, Waititi screws with and spray paints genre conventions. The MCU house rules are in place, but Jane’s character arc and the nods to Mills & Boon romance novels lead to confrontations and developments we would have never thought possible when we plopped down in theaters back in 2011. Comparisons to “Thor: Ragnarok” are inevitable given the talent involved, but “Thor: Love And Thunder” is dancing to the beat of a different (yet equally catchy) drum.

Yet, the future for Thor remains unclear. His relevancy is unparalleled, given that most of his peers have either died or retired, and it doesn’t look like it’ll be waning anytime soon. Hemsworth has expressed interest in reprising the character, so it will ultimately come down to the quality of the story. And, as we’ve established over this long, wordy journey, the franchise has never been stronger. Ironically, the oldest hero of the Avengers took the longest time to bloom, but to quote the Asgardian himself, “Life is all about growth and change.”

Have you seen “Thor: Love And Thunder” yet? If so, what did you think? What is your favorite standalone “Thor” film and what is your favorite appearance by Thor in a Marvel film? Please let us know your thoughts in the comments section below or on our Twitter account.