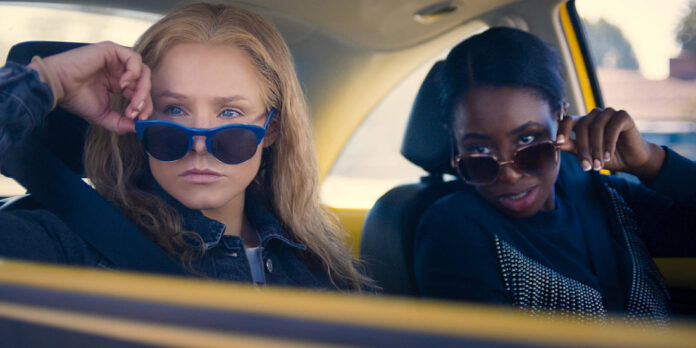 THE STORY – A frustrated suburban housewife and her best friend hatch an illegal coupon-club scheme that scams millions from corporations and delivers deals to legions of fellow coupon clippers. Hot on their trail is an unlikely duo — a hapless loss-prevention officer and a determined U.S. postal inspector — both looking to end their criminal enterprise.

​​​If you want to know what it means to truly save money on cereal, laundry detergent, and other household items, look no further than the show “Extreme Couponing.” When it premiered in 2010 on TLC, viewers were amazed at how savvy shoppers could turn a full cart of groceries worth $200 into just $40. It kind of makes you feel like a chump with your 50 cents off coupon for ice cream. But even though these extreme savers are quite impressive, they can’t compare to the two shopping queens from Aron Gaudet and Gita Pullapilly’s newest movie, “Queenpins.”

Connie Kaminski (Kristen Bell), a former race walking Olympian, has found a new passion in life. A former baby bedroom in her home has been turned into a mecca for her couponing addiction, filled with all sorts of snacks and household cleaning items. And seeing the savings happen in real-time is quite impressive, even though one cashier at the local supermarket isn’t fond of all the coupon scanning. For Connie, whose marriage with her husband Rick (Joel McHale) hasn’t been the same since she miscarried, couponing gives her the thrill in life that she’s been lacking. Her friend JoJo Johnson (Kirby Howell-Baptiste), a YouTube vlogger, also shares the same passion. As a victim of identity theft, which has totally hurt her chances of being financially independent, she’s looking for the next big thing to get her out of her mom’s home. One day, when Connie writes a scathing letter to a conglomerate over stale cereal and receives a freebie coupon, she comes up with the perfect plan to help families in need of some good deals while scamming millions from giant corporations. Along with her partner JoJo, they start an online coupon club and mail all the best deals to their clients — and these coupons come to them through some questionable means. They live it up with the millions they bring in but end up attracting the attention of Ken Miller (Paul Walter Hauser), a loss prevention officer at a supermarket chain victimized by the two women. Ken joins forces with U.S. Postal Inspector Simon Kilmurry (Vince Vaughn), and the unlikely duo attempts to bring down the two queenpins.

“Queenpins” doesn’t take itself seriously, which helps it nail the tone. It’s a wild story, but what makes it even wilder is that it’s based on actual events. But what makes the whole film work are the dynamic and hilarious relationships between characters. Connie and JoJo seem like sweet, innocent women living their suburban lives. Still, they’re ruthless as they steal from a coupon-printing factory in Mexico and rack in millions of dollars. Things don’t go according to plan, thanks to a misunderstanding with the term “dirty money,” and these two find themselves accidentally spending hundreds of thousands of dollars on some of the most lavish items money can buy. Bell and Howell-Baptiste both bring innocent smiles to their devious characters and play off each other well, which isn’t much of a surprise considering their previous work on “The Good Place” and “Veronica Mars.” A third accomplice, Tempe Tina (Bebe Rexha), who’s the hacker who stole JoJo’s identity, also adds to the fun and scheme, but it’s a shame we don’t get to see enough of her.

When Ken and Simon find themselves pursuing the two women — though Simon never fails to let Ken know this is ultimately his and the Postal Service’s operation — hilarious and over-the-top situations always come up. Ken takes his job seriously, but Simon takes it even further — he shows Ken just how important the Postal Service has been throughout history by reading a letter from a soldier stationed in Europe in 1918. It may seem like a random moment, and the whole thing throws off even Ken, but trust that you’ll be rewarded in the end. Hauser knows just how to make everyone laugh as he finds himself in ridiculous situations, like when he shuts down an elderly woman over a faulty coupon. Vaughn, unfortunately, feels very underutilized in the movie and never gets a chance to deliver the way he usually does in comedies.

More than just focusing on extreme couponing habits, “Queenpins” takes it a step further by exploring what this hobby actually means for Connie and JoJo. Even though Connie’s a former Olympian, the pinnacle of achievement for any athlete, it’s for a sport that genuinely no one watches or even believes is a sport. And as her marriage to Rick begins to grow stale since he spends three weeks traveling each month for work, it feels like there’s nothing in her life that she can control or be happy about. JoJo, too, wants more, but life hasn’t always been kind. But couponing, one way or another, gives both women that thrill and excitement that they’ve been missing. It’s nice to see a comedy blend funny moments and have a deeper look into characters’ lives rather than just focusing on the laughs. Though we may not have a deep connection to any of these characters by the end of the film, at least we know a little more about them.

There are plenty of fun performances in “Queenpins,” and it explores characters in a way that many other comedies don’t, but the film isn’t particularly memorable. More likely than not, you’ll watch something else and instantly forget about this. But while you’re watching it, there’s enough to enjoy. Who knows, you might get inspired and want to clip coupons out of your local newspaper, too.