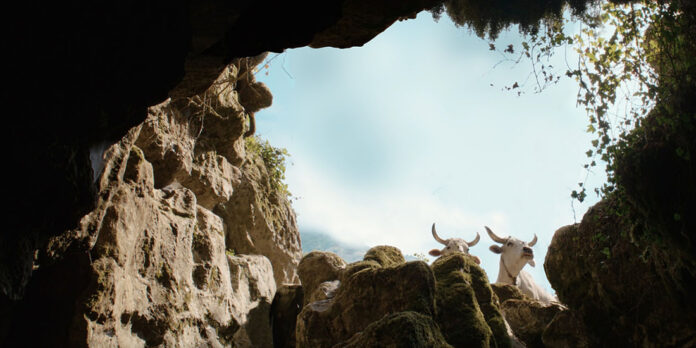 THE STORY – During the economic boom of the 1960s, Europe’s highest building is being built in Italy’s prosperous North. At the other end of the country, young speleologists explore Europe’s deepest cave in the untouched Calabrian hinterland. The bottom of the Bifurto Abyss, 700 meters below Earth, is reached for the first time. The intruders’ venture goes unnoticed by the inhabitants of a small neighboring village, but not by the old shepherd of the Pollino plateau whose solitary life begins to interweave with the group’s journey.​
​
THE CAST – Paolo Cossi, Jacopo Elia, Denise Trombin, Nicola Lanza, Antonio Lanza, Leonardo Larocca, Claudia Candusso, Mila Costi & Carlos Jose Crespo

There are fast-paced films, there are films that take their time, and then there’s “Il Buco.” The new film from Michelangelo Frammartino stretches the very definition of “slow.” It’s a languid, contemplative look at two narratives that have more in common than may be expected. And while it took a bit of time to settle into its rhythm, once I did, I found it meditative and increasingly pleasant.

We follow a pair of stories. The first observes an elderly shepherd as he goes about his livestock-based duties. The second shows a group of cave specialists, or speleologists, exploring a recently discovered cave (the film’s title translates to “The Hole”). As they continuously go deeper and deeper, it becomes clear that this cave goes even further than any of them could have planned.

To describe this film as having a plot would be generous. It’s more accurate to say it has a scenario. The camera, and thus the audience, merely observes the action (or distinct lack thereof) without doing much to indicate how we should feel about what we are being shown. This non-editorial style, combined with the use of long takes, allows the audience to take in the frame and observe small details that one would’ve never seen if the camera didn’t simply stay put as long as it does. The opening shot, for instance, features a pair of bulls peering down into the titular cave, and we watch them for so long that I became fixated on the curious way they use their ears to deflect flies. I’m sure other audience members found different things to observe. When a shot lingers for that long, we are forced to project our own interpretation onto whatever we’re seeing, rather than being told how we should feel about what’s on-screen. This directorial style is therefore effective in its lack of commentary. It’s as if the director is deferring to the audience, which comes across as very trusting.

That’s not to say that it’s the most enrapturing film I’ve ever seen. The half of the film involving the shepherd tends to stray from the patient into the tedious. At one point, we’re shown an extended close-up shot of him sleeping, but nearly everything involving the exploration of the cave is fascinating. Just observing the process of scientific spelunking is enjoyable. At first, objects are tossed into the cave to measure their depth – rocks and flaming pieces of magazine paper – before they finally lower men down to methodically chart the depth and path of the hole. It’s all very well shot and surprisingly captivating. The dual narratives subtly comment on each other until they ultimately converge in a symbolic way that’s expected but shockingly emotionally resonant.

With “Il Buco,” the form proves to emphasize further what the film seems to be telling us: allowing life, like the film, to wander and be formless is perfectly acceptable. The film tests its audience’s attention span, but the rewards at the end of the cave are worth the time for those who are willing to stay with it.