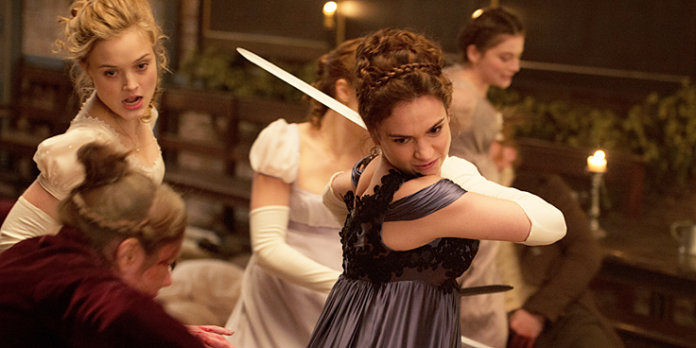 THE STORY – In the 19th century, a mysterious plague turns the English countryside into a war zone. No one is safe as the dead come back to life to terrorize the land. Fate leads Elizabeth Bennet (Lily James), a master of martial arts and weaponry, to join forces with Mr. Darcy (Sam Riley), a handsome but arrogant gentleman. Elizabeth can’t stand Darcy, but respects his skills as a zombie killer. Casting aside their personal differences, they unite on the blood-soaked battlefield to save their country.

There have been many films throughout the last couple of years, which have tried to merge two genres heavily involved in the cultural zeitgeist into a single film. “Cowboys And Aliens” and “Abraham Lincoln: Vampire Slayer” immediately come to mind. Now the formula is back with “Pride And Prejudice And Zombies.” An adaptation of the parody novel by Seth Grahame-Smith from Jane Austen’s classic 1813 novel, ‘Pride And Prejudice And Zombies” is a film with an unbelievable concept that fails in its execution due to Burr Steers’ poorly written script and amateurish direction.
​
The story takes place in 19th century England. A zombie outbreak has occurred and threatens civilization during a time of social conformity, and lots of proper etiquette. Mr. Bennet (Charles Dance) has had all of his 5 daughters trained in the arts of combat. One of them, the spirited Elizabeth Bennet (Lily James), is having to watch all of her sisters clamor for marriage with the right man, where she won’t let her pride get in the way of such trivial affairs. Mr. Darcy (Sam Reily) is a master of zombie killing and the epitome of upper-class prejudice. Together, they will meet, clash, and will eventually have to find a way to co-exist and survive in this world together.

“Pride and Prejudice and Zombies” could have been a great deal of fun. The concept is so amusing and ripe with possibilities, that to see it squandered by such lazy direction and dull writing, leaves the viewer wondering if a simple 5-minute viral youtube video would’ve been enough to engage in such a fantasy. The choices of shots by director Steers are inexplicably bland and uninspired, leaving one to wonder if there was enough coverage during production to put together a proper edit.

The acting by the cast is also hindered by the uninspired direction. Lily James and Sam Riley lack any, and all forms of on-screen chemistry resulting in a slowly developed romance that neither grips nor maintains the audience’s attention. It does not help matters that the writing tries to play itself up as serious when this film should be anything but. No one seems to deliver their lines with the right level of absurdity that the subject matter calls for. The closest this film gets to that goal comes from an animated and quite a ridiculous Matt Smith, who steals every scene he’s in. He seems to be the only one that understands the joke and plays it as such. Everyone else is trying to do their best “Downtown Abbey” (Of which Lily James is a part of) and they all fail miserably under the heavy-handed, yet lazy direction of Burr Steers.

The one saving grace other than Matt Smith in this film should have been the zombie action. Sadly, even that does not get the job done. How does one make a PG-13 Zombie film? Keep in mind that by doing so, all of the gory elements are eliminated, which makes zombie films so much fun in the first place. It’s though as if the studio knew they had a stinker on their hands and as such, trimmed down the brutal elements that this genre is known for in the hopes of getting more box office returns.

In the end, this is neither a good costume drama nor a good zombie film. If you’re one of the few people that have never read Jane Austen’s classic novel in school, you’ll find the story incredibly hard to engage with. You’ll hope that the zombie action and horror elements will make up having to sit through such dull scenes. Sadly, you’ll be disappointed. This was supposed to be a horror-comedy, but it fails to deliver the horror and the comedy.