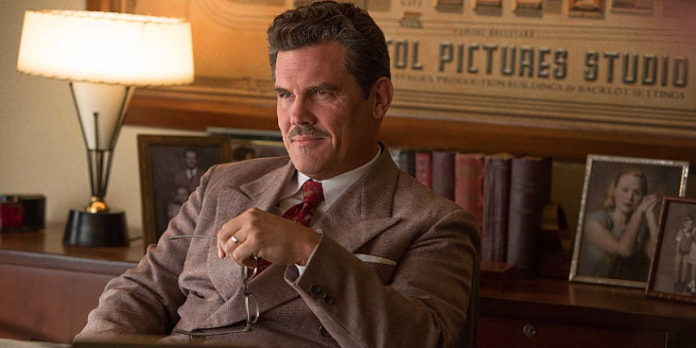 THE STORY – In the early 1950s, Eddie Mannix is busy at work trying to solve all the problems of the actors and filmmakers at Capitol Pictures. His latest assignments involve a disgruntled director, a singing cowboy, a beautiful swimmer and a handsome dancer. As if all this wasn’t enough, Mannix faces his biggest challenge when Baird Whitlock gets kidnapped while in costume for the swords-and-sandals epic “Hail, Caesar!” If the studio doesn’t pay $100,000, it’s the end of the line for the movie star.
​
THE CAST – Josh Brolin, George Clooney, Alden Ehrenreich, Ralph Fiennes, Jonah Hill, Scarlett Johansson, Frances McDormand, Tilda Swinton & Channing Tatum
​
THE TEAM – The Coen Brothers (Directors/Writers)
​
THE RUNNING TIME – 106 Minutes

The Coen Brothers are in a league of their own when it comes to filmmaking. Praised for their idiosyncratic characters, unusual plot developments and engaging dialogue, they have given us some of the most memorable films of the last 30 years. This year, they are back with their 1950’s comedy/noir “Hail Caesar”, which pays homage to the Golden Age of Hollywood, and goes a step further to establish the Coen Brother’s love of cinema, their gift of cinema, and worship of cinema. The film is an often hysterical mess, consisting of oddball characters on the verge of the age of television trying to work through a system that is so wild and unpredictable. The whole ordeal makes them (And the audience) question their love of cinema. It is in this regard that “Hail Caesar” shines brightest. However, the result is muddled in what seems to be an incomplete film. ​
​
Eddie Mannix (A chameleon Josh Brolin) is a Hollywood fixer in the 1950s for Capitol Pictures, who the studio calls when they need a situation sorted out. During a 24 hour period, he’s responsible for transitioning a western star Hobie Doyle (Alden Ehrenreich) out of his comfort zone into the genre of drama (Directed by a comedic Ralph Fiennes), and covering up a pregnancy for star DeeAnna Moran (Scarlett Johansson). To add more stress to the various activities of the day, Baird Whitlock (George Clooney), the leading star of the studio’s biggest release of the year (“Hail, Caesar”) is suddenly drugged and kidnapped by a group who calls themselves “The Future” for a ransom of $100,000.

Whether his work involves a pep talk with a struggling actor or making back deals to get stars out of trouble, Eddie is good at his job. However, the day to day craziness of dealing with such large personalities in high-stakes situations is leaving Eddie questioning his place in the Hollywood world. It’s hard work and he knows it. However, he is a slave to a system whose only goal is to turn a profit, despite those who still believe in the artistic nature of their professions. It’s clear throughout the film that the Coens are taking a big stance on the current status of the film industry, and the desire of many of their colleagues to abandon it for the current golden age of television.

The Coens hold nothing back in celebrating old school qualities of cinema that made them, and many of their peers, fall in love with it initially. The snippets of the films being made by Capitol Pictures within the film are fun exercises in homage, which transports the audience to a simpler time when the film industry was still new and held in higher regard than it is today. To aid them in this message, the Coen brothers tackle deep themes of religion and enlist the help of the God of Cinema himself to remind viewers of why we love movies. These underlying thematic qualities are what gives the film its heart, its brain, and its soul.

However, as enjoyable as the characters and their performances are (Especially Alden Ehrenreich and a growingly talented Channing Tatum), their brief scenes and little explanation for their backstories fail to give them the same depth that the plot of the movie has. It leaves the film feeling uneven and empty (Jonah Hill especially, as talented as he is, only has maybe 1 minute of screentime). Had more time been devoted to the side characters other than Mannix, this would be hailed as one of the Coen’s best. As it is, it’s still a fun time at the movies for cinephiles that worship the Coen Brothers, who (luckily for us) still worship movies. Some may leave feeling disappointed or confused by some of the underlying themes that are not always clear at the beginning of the film. But those same themes slowly reveal themselves throughout, which may result (for some) in a spiritual cinematic experience. ​