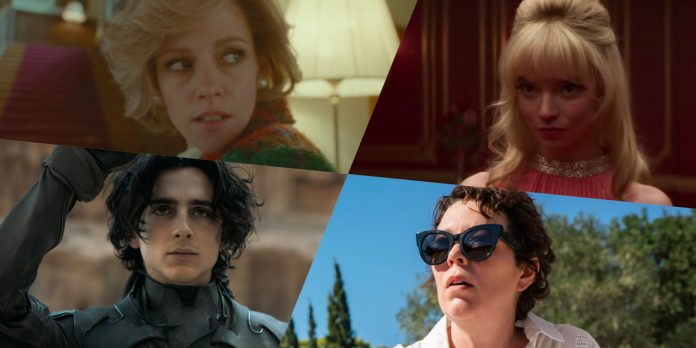 By Cody Dericks
​
In just a few days, I’ll be flying through the skies on my way to the Venice Film Festival. It’ll be my first time at the festival (and my first visit to Italy in general), and to say I’m excited would be an understatement. The collection of films that will be premiering there is varied and intriguing, with a mix of proven creatives and new blood getting a chance to show their work. The following films are the ones I’m currently planning to watch and review, but I may see even more based on word-of-mouth. Unfortunately, due to travel plans, I will be departing before the premieres of “Halloween Kills” and “The Last Duel.” Still, the films listed below should provide more than enough cinematic greatness to make the trip well worth it.

Parallel Mothers
Spanish master Pedro Almodóvar’s latest promises to cover material that he has previously shown an expert ability to capture on film: motherhood. His frequent collaborator Penélope Cruz leads the film, and there is already awards buzz just from the fact that the director and actress are working together yet again. Almodóvar directed Cruz to her first Oscar nomination in “Volver.” Can they replicate that success with “Parallel Mothers?” All this buzz plus a fantastically startling poster have made me very curious to see Pedro’s newest work.

The Lost Daughter
Actors taking a seat in the director’s chair is nothing new, and Maggie Gyllenhaal is the latest performer to inhabit the position with her feature directorial debut “The Lost Daughter.” This film boasts a stunning cast based on Elena Ferrante’s novel, including Jessie Buckley, Dakota Johnson, Peter Sarsgaard, Ed Harris, and Olivia Colman. Colman, in particular, has been on a cinematic hot streak for the past few years, so I’m eager to see anything she’s involved in.

Dune
Arguably the biggest film of the festival, Denis Villeneuve’s adaptation of the epic sci-fi novel classic has a lot riding on it. But when I watch it in Venice, I’ll be putting all thoughts of potential box office, HBO Max dealings, and the streaming-versus-theatre debate aside and just taking “Dune” in as a film. It has an undeniably phenomenal cast with too many stars to list here, and Villeneuve has proven himself as a director time and time again. I have yet to be let down by him, so I can’t wait to see how he brings this famously challenging to adapt work to the big screen.

The Power Of The Dog
Legendary director Jane Campion is back with her adaptation of Thomas Savage’s novel, “The Power of the Dog.” This film is already the talk of awards pundits, even this early into the season, and with one glance at the cast and crew list, it’s easy to see why. A fantastically stacked cast (I’m particularly pumped to see what Kirsten Dunst brings to the material) along with a score from Jonny Greenwood and cinematography from Ari Wegner that already impressed in the trailer make it hard not to be anything but hyped for this film.

The Hand Of God
This is perhaps the film I’m the most skeptical about as I head to Venice. Frankly, I haven’t been very enamored of director Paolo Sorrentino’s previous works. The description and look of this film don’t seem to indicate that this will be a departure from the themes explored in his other films. Still, the trailer was undeniably gorgeous, and if nothing else, the film as a whole will be a thing of beauty. This promises to be a personal film, which is usually the best source of inspiration for many directors, so maybe “The Hand of God” can cure me of my Sorrentino hesitance.

Last Night In Soho
On the flip side, Edgar Wright’s latest is probably the film, “Last Night in Soho,” I’m most looking forward to seeing in Venice. One of my favorite working directors exploring horror, my favorite genre, is almost too good to be true. The trailer blew me away with its mix of old-school aesthetic and modern horror flair. And moreover, it stars Anya Taylor-Joy and Thomasin McKenzie – two of the most compelling young talents working today. Just get me in the theater already!

Spencer
This is yet another film that recently released a trailer that really piqued my attention. I was already intrigued by the promise of seeing Kristen Stewart inhabit one of the most famous and iconic figures of the last century, being that Stewart is one of the most dynamic and engaging actresses working today. Add to that the fact that Pablo Larraín appears to be returning to a similar mode as his work in “Jackie,” which was one of my favorite films of 2016, and I’m just so damn thrilled to see “Spencer.” Fingers crossed that Stewart impresses as much as I know she can, which might finally lead to her long-deserved first Oscar nomination.

Official Competition
The most intriguing thing about “Official Competition” is that Antonio Banderas and Penélope Cruz are helming it – two actors I’m always thrilled to see doing new, original work. I’m not too familiar with the directing pair of Mariano Cohn and Gastón Duprat, but this is a film about filmmaking, so naturally, it has me interested. I always like to see directors reckoning with the very art form they choose to work in themselves.

Mona Lisa And The Blood Moon
Regardless of the quality of the film, Ana Lily Amirpour’s latest will undoubtedly be known as the film with the best title at the festival. That alone was enough for me to want to check it out. It also features a curious assemblage of actors in its cast, including Kate Hudson, Craig Robinson, Ed Skrein, and Jeon Jong-Seo (who captivated me with her performance in “Burning“). There’s a lot about this film that intrigues me, and I’m curious to see if the product lives up to the parts of which it’s made up.

Sundown
The writer-director Michel Franco has once again teamed up with actor Tim Roth after their recent collaboration “Chronic” brought them attention a few years ago. That film won Best Screenplay at the Cannes Film Festival and scored a reasonably surprising Best Feature nomination from the Film Independent Spirit Awards, so we’ll have to see if their latest pairing will bring similar attention and success. Its premise seems fairly dire (“A wealthy man attempts to abandon his life while vacationing in Acapulco”), but with Roth and Charlotte Gainsbourg leading the cast, it should at least have some powerful performances at its center.

Are you excited for the film festivals to kick-off with Venice? Which film playing at the festival are you most looking forward to? Let us know your thoughts in the comments section down below or on our Twitter account.