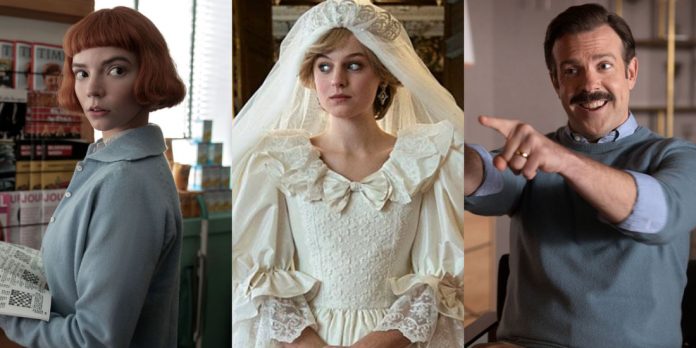 And here we go! The Creative Arts Emmys have been awarded, and now, it’s time to predict the big ones: Outstanding Comedy, Drama and Limited Series winners. We’ll look at the races most likely to have an upset and any last-minute changes.

In the race for most wins overall by a streaming service Netflix is heading into the Primetime Ceremony with a commanding lead of 34 Emmys—they should be able to finish the 2021 Emmys as the Streamer/Network with the most wins. In second place currently is a surprise—Disney+ with 13 wins. Not too far behind in third is HBO with ten wins. And in fourth place is AppleTV+ with seven wins. “The Crown” and “The Mandalorian” went into the Creative Arts Emmys with 24 nominations each. “The Mandalorian” equaled its haul from last year, winning another seven Emmys. Meanwhile, “The Crown” had a so-so outing, only picking up four trophies. Notably, for the first time in its awards season run, it did not pick up the prize for Best Period Costumes — this went to “The Queen’s Gambit,” which has gone on to win a commanding nine Emmys so far. “Ted Lasso,” “WandaVision,” and “Pose” each had a decent weekend picking up three prizes each.

​Who’s going to win the major prizes this Sunday? Time to finish this up!

Let me remind everyone that when we looked at Outstanding Comedy Casting, the past six winners have gone on to win Series. Since there’s no suspense, let’s just get to it…

Most likely to upset: “Hacks”

For “Hacks,” to pull off an upset, everything would have to go right for the HBO series and wrong for “Ted Lasso.” But I don’t see how that would happen since “Ted Lasso” is so far out in front at the moment.

Check out my other articles for the Comedy Categories:

Last-Minute Changes: I don’t have any last-minute changes. But I am worried that the men of “SNL” (Keenan Thompson and Bowen Yang) and the gents of “Ted Lasso” (Brendan Hunt, Nick Mohammed, Brett Goldstein, and Jeremy Swift) could all split the vote leaving Carl Clemons-Hopkins (“Hacks”) or Paul Reiser (“The Kominsky Method”) the opportunity to spoil If this happens I hope its Reiser — with the career he’s had in television he deserves for luck to be on his side for once.

As I covered in my article about Drama Casting, only four of the winners out of six have gone on to win Series: “Game of Thrones” and last year’s winner “Succession.” This gives “The Crown” a 67% chance of winning, leaving only a 33% chance of an upset. Ironically, “The Crown” did win Casting in 2018 but did not pick up the Series win, losing to “Game of Thrones.” “The Crown” didn’t have as strong an outing as it used to, but that’s because of the dominance of Netflix’s Limited Series “The Queen’s Gambit.”

“The Crown” not only picked up Casting, but it upset winning Outstanding Drama Guest Actress for Claire Foy. If Colman goes home empty-handed, maybe they can find a way to have her back and give her a chance in the Guest race.

Most likely to upset: “The Mandalorian”

“The Mandalorian,” unlike last year, is in a few categories in the Primetime Ceremony. Like “Game of Thrones,” it may have to wait a few more seasons before it can pull off a win in the big one.

Check out my other articles for the Drama Categories:

Last-Minute Changes: None. The big question looming over the Drama field remains—Will “The Crown” sweep the top seven awards of the evening? Probably not but it’s still possible.

After “The Queen’s Gambit’s” commanding performance during the Creative Arts Emmys, a new question has arisen: Will the Netflix series break the record of most wins currently held by “John Adams” (2008) with 13? For “The Queen’s Gambit,” it will only need four wins to tie and five to break the record. Either way, should the series win, it will be an impressive first for Netflix as they’ll make history as the first streamer to win Limited Series.

Most likely to upset: “Mare of Easttown“

Never count out HBO to pull off a big win.

Final Outstanding Limited or Anthology Series Predictions
1. “The Queen’s Gambit“
2. “Mare of Easttown“
3. “I May Destroy You”
4. “WandaVision“
5. “The Underground Railroad“

Last-Minute Changes: Nada. Although if I were going to make a bold prediction, I would do so in Outstanding Limited Series/TV Movie Supporting Actor and predict Thomas Brodie-Sangster for the upset. If the acting branch loves “The Queen’s Gambit” as much as the rest of the academy, it’s a distinct possibility.

Check out my other articles for the Limited Series/TV Movie Categories:

Do you agree or disagree with my logic? What are you predicting to win the Emmys for the Outstanding Comedy, Drama, and Limited Series categories? Let us know your thoughts in the comments section below or on our Twitter account. We will be posting our team’s final predictions tomorrow and you can listen to us discuss all of these categories in more detail on the podcast.