“PAWS OF FURY: THE LEGEND OF HANK” 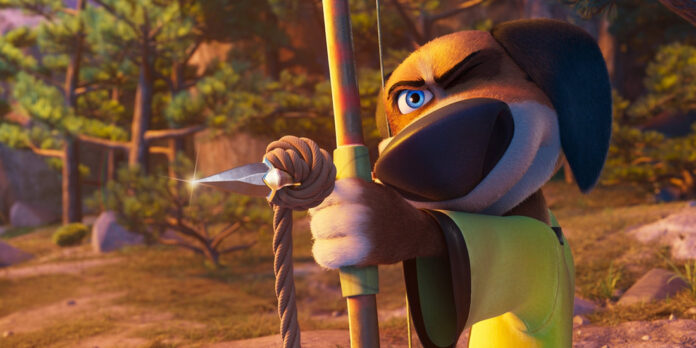 THE STORY – A down-on-his-luck hound finds himself in a town full of cats who need a hero to defend them from a ruthless villain’s evil plot to wipe their village off the map. With help from a reluctant trainer, the underdog must assume the role of fearsome samurai and team up with the felines to save the day. The only problem is — they all hate dogs.
​
THE CAST – Michael Cera, Ricky Gervais, Mel Brooks, George Takei, Aasif Mandvi, Gabriel Iglesias, Djimon Hounsou, Michelle Yeoh & Samuel L. Jackson
​
THE TEAM – Rob Minkoff, Mark Koetsier, Chris Bailey (Directors), Ed Stone & Nate Hopper (Writers)​
​
THE RUNNING TIME – 97 Minutes

No one makes a comedy quite like Mel Brooks. Decades later, “The Producers,” “Blazing Saddles,” “Young Frankenstein,” and “Spaceballs” are still considered some of the best comedies ever made. His broad, silly, fourth-wall-breaking spoofs are almost a genre all on their own. It makes sense why few have attempted to replicate Brooks’ style over the years; it’s challenging to make it work. It’s with a confusing boldness that Nickelodeon Movies and Paramount decided to make an animated film loosely based on Brooks’ “Blazing Saddles.” Sadly, the charm and hilarity of the original are lost in “Paws of Fury: The Legend of Hank,” originally titled “Blazing Samurai.”

The evil cat Ika Chu (Ricky Gervais) controls the day-to-day operations of Kakamucho, while the much kinder ruler of the city, Shogun (Mel Brooks), is away. Only cats live in this part of the world, and dogs are executed when found. When Ika Chu wants to wipe a smaller village off the map, he encounters Hank (Michael Cera), a prisoner dog who has crossed into Kakamucho. Hank is a bumbling, seemingly talentless dog who longs to be a samurai. There’s just one problem: only cats can be samurai. Ika Chu decides to send Hank to the village as their samurai, knowing he’ll leave the town effectively defenseless. Sent on a doomed mission, Hank seeks out an experienced samurai named Jimbo (Samuel L. Jackson) to help him protect the city.

Sadly, Hank’s journey is nothing compelling, mainly because the story surrounding this bland dog doesn’t make much sense. Why does Ika Chu want to destroy this village? Just…because? Jimbo has a tragic backstory, but why is he just sitting back and letting the town be destroyed until Hank shows up? The story is thrown together with loads of random side characters, but not much is happening emotionally. Subpar animation doesn’t help to elevate the story, either. Though “Paws of Fury: The Legend of Hank” hails from Paramount and Nickelodeon Movies, it feels less like a feature film and more like a straight-to-Nickelodeon T.V. movie.

The lack of emotional resonance wouldn’t be a big deal if the movie were actually funny. Instead, every joke in “Paws of Fury: The Legend of Hank” feels like it was written twenty years ago. When the samurai attack the village, Jimbo tells Hank that these guys are serious. “They’re N.W.A.: Ninjas with attitude,” he says. These jokes fall embarrassingly flat every time. Fourth-wall breaks, which often work so well in Brooks’ films, don’t fare much better. They’re awkwardly placed and even misguided at times. Multiple references to ending the movie “85 minutes on the dot” serve as reminders of how long it’s been without laughs. The lazy voice acting doesn’t favor the humor, as many of the performers simply sound unenthusiastic or bored. Perhaps most disappointing of all is Ricky Gervais, whose performance as the main villain is primarily flat.

Perhaps it’s because little else in the film works, but watching this in a crowded theater full of children highlighted how violent the movie is. While a certain level of violence is expected in a film about samurai cats, “Paws of Fury: The Legend of Hank” feels more brutal than most animated films tend to be. It’s nothing inappropriate. It’s just elevated. This, along with Jimbo’s literal alcoholism, feels misplaced in a movie that seems geared at a much younger audience. Still, the most indiscriminate of viewers may be enticed by the fart jokes.

“Paws of Fury: The Legend of Hank” is a miss all around. As an adaptation of “Blazing Saddles,” it’s an embarrassing and misguided endeavor. Taking that a step further, the film is unattractive and bland as an animated film. And finally, as a kids’ movie, it’s tedious and weirdly offensive. Thankfully, it’s more forgettable than anything, so it won’t stick with viewers for long.