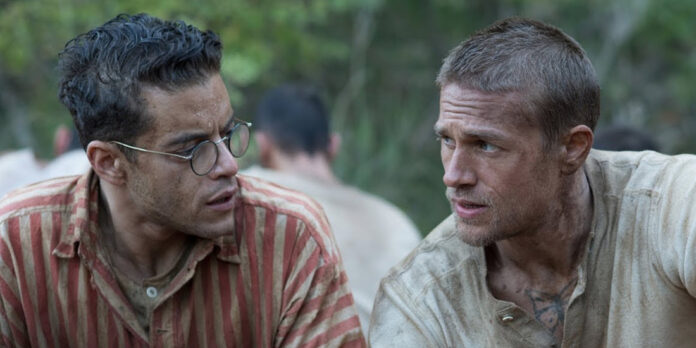 THE STORY – The epic story of Henri “Papillon” Charrière, a safecracker from the Parisian underworld who is framed for murder and condemned to life in the notorious penal colony on Devil’s Island. Determined to regain his freedom, Papillon forms an unlikely alliance with convicted counterfeiter Louis Dega, who in exchange for protection, agrees to finance Papillon’s escape.

​​And here we are. 45 years since the original film was released and 4 years since “Sons Of Anarchy” went off the air and Hollywood is still trying to make worthless remakes and Charlie Hunnam still happen. “Papillon” is an epic prison drama filled with intrigue, torture, daring escape attempts, brutal beatdowns and a shirtless Charlie Hunnam for nearly 50% of the running time. While “Papillon” is undoubtedly structured as an epic, it mercifully keeps the story trimmed down to under two and a half hours and is filled with enough well-paced and engaging set pieces to maintain one’s attention despite having a shallow core at its center.

Henri “Papillon” Charrière (Charlie Hunnam), is a thief living in Paris in 1931 with his beautiful girlfriend (Eve Hewson) who he intends to marry. His future is snatched away from him when he wrongfully gets accused of murder and is sent away to prison. While on the inside, with little to no hope for an appeal, Charrière meets Louis Dega (Rami Malek), a counterfeiter who has incredible wealth both inside the prison and outside as well. Acting as his muscle for protection, Charrière strikes a deal with Dega to protect him in exchange for payment when they both get out. The two men are soon transferred to South America where the conditions worsen under the watchful eye of warden Barrot (Played chillingly by “The Girl With The Dragon Tattoo’s” Yorick van Wageningen). Should the two men be caught trying to escape, they will face 2 years in solitary confinement. Caught again? Another 5 years. After that…a lifetime banishment to Devil’s Island. And should they kill anyone in the process of trying to escape, they will be executed.

The first question I asked myself after watching “Papillon” was why? Why was this remake of an already well-regarded film necessary? It does fuel the belief that for any remake to truly matter or feel important, there has to be a story worth re-telling. Maybe there are some upgrades that could be presented visually. Or the story’s themes can hold more relevance during current times. Instead, we are presented with the incredible true story of Henri “Papillon” Charrière…and that is it. This remake exists and yet it can never tell us why it deserves to exist.

Charlie Hunnam started to impress me (and a few others) last year with his performance in James Gray’s “The Lost City Of Z.” However, his performance in “Papillon” lacks the same level of believability which he brought to his more nuanced performance last year. The film wants us to see how this once happy and hopeful young man has been chipped away at, little by little and reduced to nothing. He is beaten, psychologically tormented after being held in solitary confinement for years and starved to the brink of death. The intention is to show that despite this level of inhumane treatment, Charrière is a survivor. With each failed escape attempt, we are left wondering if this confident, muscular and sharp specimen of a man is going to break or not. His resilience is admirable, although I consider that to be a credit to the screenplay and the real-life Charrière (despite the film dramatizing true events) and not to Hunnam’s acting ability.

The beating heart of “Papillon” is the friendship which develops between Henri “Papillon” Charrière and Louis Dega, played by Rami Malek. Awkward, meek and vulnerable, Dega needs Charrière to survive on the inside just as much as Charrière believes he needs Dega if he’s ever going to survive on the outside. Their agreement starts off as a business transaction until the years of sacrifice and suffering takes its toll and transforms their relationship into a friendship. Although individually their performances are nothing to get too excited over, there is something to be said for the fact that both Hunnam and Malek are able to successfully convey this change and get us emotionally invested up until the end.

Despite higher production values and two hotly buzzed about actors in the lead roles, “Papillon” probably does not need to exist but the truth is that it does. And for what it is, it’s at the very least a respectably entertaining remake, albeit not an important one. The black and white archival footage at the end of the film signifies that director Michael Noer truly believes that this is an important story worth telling. Inhumane prison conditions will always be a topic worth discussing. However, other than presenting a thrilling story of one man’s survival, escape and the friendship which got him there, this modernized version of “Papillon” brings nothing new to the table that the 1973 Franklin J. Schaffner directed version did not already.