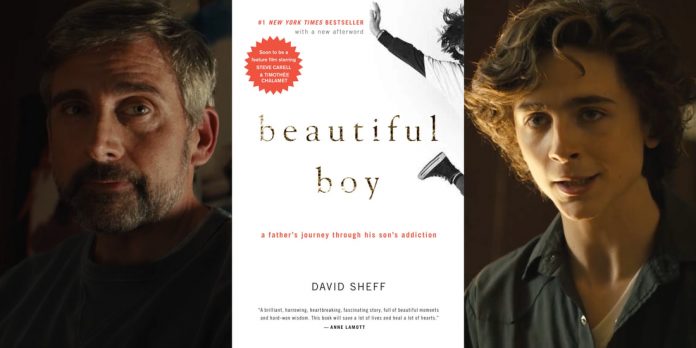 Earlier this year, we put up a poll for you all to select sources of material that could be potential contenders for Best Adapted Screenplay this year. The top 3 choices were Boy Erased (previously reviewed here), First Man (upcoming) and now our latest review of “Beautiful Boy: A Father’s Journey Through His Son’s Addiction” by David Sheff. These are all going to have their source material examined by us on the show with an in depth discussion into the work’s themes, characters and our predictions as to how it will all translate to the screen. These podcast episodes are exclusive to our Patreon subscribers but we have included a preview of the latest episode after the jump. For the small price of $1 a month, you can get the full episode, so be sure to subscribe here.

For the second episode of Next Best Adaptation myself, Kt Schaefer, Nicole Ackman and Dan Bayer all read David Sheff’s story “Beautiful Boy” which will premiere at TIFF in a few days and be released by Amazon Studios on October 12th. The adaptation is being directed by Felix Van Groeningen (“The Broken Circle Breakdown”) who also co-wrote the adaptation with Luke Davies (“Lion“) and stars Steve Carell and Timothee Chalamet as David Sheff and his son Nic Sheff respectively.

Thank you and please feel free to subscribe to the Next Best Picture Podcast on either ​SoundCloud, Tunein, GooglePlay, iTunes, Stitcher, Player FM & CastBox. Also be sure to help support us on Patreon for as little as $1 a month and you’ll receive exclusive podcast content.

You can follow Will, Kt, Nicole, & Dan and hear more of their thoughts on the Oscars and Film on Twitter at @mavericksmovies, @kt_schaefer, @nicoleackman16 & @dancindanonfilm