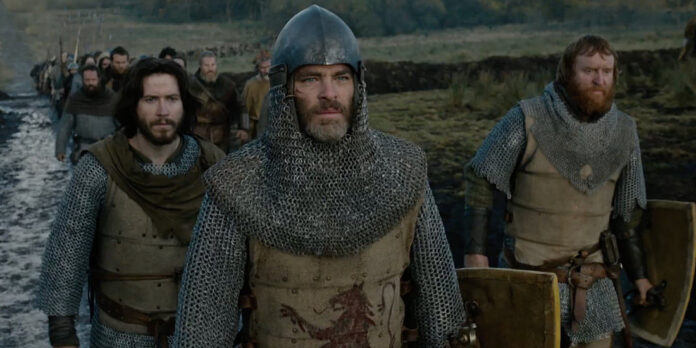 THE STORY – After being crowned King of Scotland, legendary warrior Robert the Bruce is forced into exile by the English and leads a band of outlaws to help him reclaim the throne.
​
THE CAST – Chris Pine, Aaron Taylor-Johnson, Florence Pugh, Billy Howle, Tony Curran & Stephen Dillane

​​The fact that many will not get a chance to see David Mackenzie’s “Outlaw King” on the big screen is a disservice to fans of historical blockbusters and big, brutal battle scenes. I want to emphasize the latter in this case, because “Outlaw King” showcases some of the best, bloodiest battle sequences of the “men with shields and swords” variety that I’ve seen in a film in years. Granted, the action sequences seen on “Game Of Thrones” are of comparable quality. And if you’re not a fan of the violent excesses of “Game Of Thrones” than you’ll find even less to like in “Outlaw King,” which lacks the engaging narrative and complex characters that fans of the beloved HBO series hold dear.

“Outlaw King” picks up where Mel Gibson’s “Braveheart” (1995) left off, after the surrender of Scottish resistance forces to the English throne and the execution of its symbolic leader, William Wallace. It would seem that Scottish leaders have been resolutely castrated by King Edward I (Stephen Dillane) and his mad son, the Prince of Wales (Billy Howle), but when Robert the Bruce (Chris Pine) bears witness to ongoing abuses by English forces and violent resistance on behalf of the people of Scotland, the death of his father, the elder Robert de Brus (James Cosmo– who starred in “Braveheart”), prompts Bruce to take matters into his own hands. And so the fight against English tyranny is renewed under the mantle of the newly declared King of Scots and his small band of fighters as they fight to recapture lost territory and inspire more men to join their ranks. It’s a classic David versus Goliath story, as Bruce’s forces are miserably dwarfed by the massive English army, forcing the Scots to rely on their exclusive knowledge of the environment, and their innate national fighting fervor to overcome their unwelcome foe.

The writing isn’t exactly what we’d call inspired– whatever might be interesting about the audacious campaign of Robert the Bruce is reduced to a simplistic ethical manliness of things like codes of chivalry, honor, physical prowess, or lack thereof.  Chris Pine does a fine job of filling out all of the expectations of his character, who is simply not that interesting of a human being in this rendering. Though he’s mostly serviceable, Mackenzie puts those visuals front and center with some arbitrary shots of Pine’s hot bod in all its glorious natural state.

Given that we’re only really dealing with brute fun and cheering for a crew of ripped Scottish manly-men hungry for the blood of the colonizer, then Aaron Taylor-Johnson’s James Douglas, one of Bruce’s right-hand men, is the most satisfying masculine performance of the bunch, thanks in part to Taylor-Johnson’s signature crazy eyes that anchor his character’s sly demeanor and vengeful frenzies. Meanwhile, Florence Pugh who plays Bruce’s English bride is the standout performance amongst so much one-track minded masculinity. Pugh is only 22 years old, but she commands the screen like an actor doubled her age as Bruce’s headstrong second wife, as well as the most sympathetic, complex character in the film. With this and her breakout role in last year’s “Lady Macbeth,” Pugh demonstrates great skill in period pieces that call for fierce female protagonists– I’ll be interested to see her take on a more challenging role given her evident strengths.

“Outlaw King,” in the moment, can be great fun, even if the story might induce some rolling eyes. David Mackenzie seems more concerned with creating a visually impressive and historically rich world and putting unique, gutty technical spins on the scenes we have come to expect from medieval period pieces: charging horses, sword sparring, wedding banquets, etc. All of these moments are bolstered by a thunderous score by Jim Sutherland, and innovative, dynamic camerawork by Barry Ackroyd– the result of a keen directorial eye bent on building up a certain energized atmosphere. The final edit is rather choppy, with an excess of small expository scenes that jump from one storyline to another without giving any single one much time to breathe; though this does have the effect of moving the story along expeditiously and drawing out the in-demand action sequences. This is no “Hell Or High Water,” but purely as an action movie, “Outlaw King” should be able to recruit a healthy crew of loyal fans for the genre.