“THE GARDEN LEFT BEHIND” 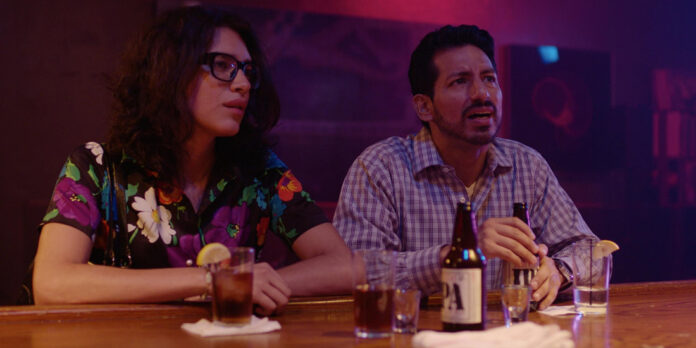 THE STORY – A Mexican trans woman struggles to build a life for herself as an undocumented immigrant in New York City.

​​​​There is virtue in a film that forces an audience to experience the life of a specific group. Empathy is inherent to the film experience – when an audience is shown a person’s habits, goals, and dreams it’s difficult to not find a connection with the character. “The Garden Left Behind” is an exploration of the life of a Mexican-American trans woman, and in its slice-of-life nature, it aims to make the audience identify with her everyday accomplishments and struggles. There’s a fine line, however, between a sympathetic portrait of someone and an almost exploitative look into the life of a socially marginalized person, and this film struggles at times to find a balance between these two qualities.

Our main character is Tina (Carlie Guevara), a young taxi driver approaching the end of her 20s. She lives in New York City with her grandmother (Miriam Cruz), with whom she emigrated from Mexico as a child. The film follows her daily life as a taxi driver navigating a rocky relationship and working with a medical team to facilitate the start of her transition. Tina’s life has its ups and downs, and it begins to intersect with a young man (Anthony Abdo) in unexpected ways.

The film aspires to capture Tina’s life in a way that’s unvarnished and realistic. What most helps this be accomplished is the performance of the film’s ensemble. As Tina, Guevara is charming and engrossing. She brings a lived-in quality to her day-to-day life. The supporting players further sell this realism. For the most part, they all have an unrehearsed quality to them that sells the everyday nature of the characters. As the shy Chris, Abdo is appropriately tortured and captivating, even with very little dialogue. But the standout performance is Cruz as Tina’s grandmother, Eliana. She has a unique relationship with Tina – she doesn’t completely understand her transition but she unquestionably adores her. Their bond is strong and their interactions are warm, and Cruz sells every moment of affection and tenderness perfectly. She not only deliver the best performance, but she’s also the best part of the film.

Unfortunately, “The Garden Left Behind” can’t be as comforting and affecting as Tina and Eliana’s scenes together. A good portion of the film is devoted to a seemingly unrelated subplot involving Chris and his group of toxic, bigoted friends. It frequently cuts to this collection of young men gathered together, tossing off slurs and discriminatory language without trouble. The film is intentionally obtuse about how this plot is connected to Tina’s main story, and the dichotomy the film establishes between the two storylines is incredibly unbalanced. It’s hard not to have an instinctual unpleasant reaction whenever we go to this group of boys. Seemingly filmmaker Flavio Alves’s intended effect, and it makes the audience acutely aware that, in the world of the film, Tina’s life could be interrupted by danger and violence at any time. It makes its point clearly, but that doesn’t mean it evokes anything but a feeling of displeasure from the audience.

Further coloring Tina’s life in a trepidatious light are the frequent references to the violence and discrimination faced by trans women of color. In nearly every area of her life except her moments with her friends and family, Tina is at some point forced to confront people’s ignorance. The film sets its audience on edge in a way that leads to an ending that’s both shocking in its execution, and unfortunately, not surprising given the hostile view of the world painted by the movie. It’s a troublesome watch, and we find ourselves wondering who exactly this film hopes to reach with its message. Yes, it’s important to show the hardships still faced by groups that have been othered by those in power, but this film feels aimed at the sympathies of cisgender people rather than existing as a story of community for transgender folks to enjoy.

The grounded and engaging performances in “The Garden Left Behind” can’t completely rescue the film from being an incredibly difficult watch. It’s both a captivating story of resilience and a harrowing, unpleasant look into humanity’s darkest tendencies.