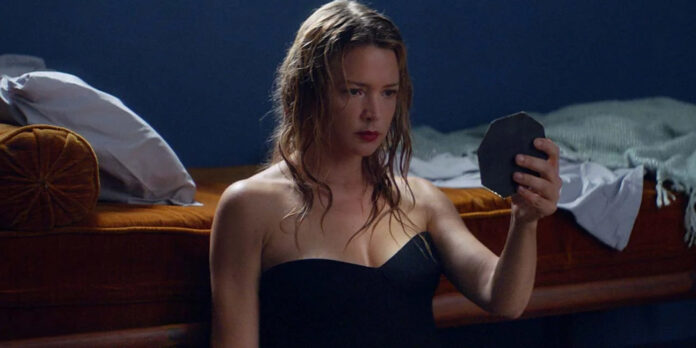 THE STORY – Sibyl is a psychotherapist who returns to her first passion: writing. Her newest patient, Margot, is a troubled up-and-coming actress, who proves to be too tempting a source of inspiration. Fascinated almost to the point of obsession, Sibyl becomes more and more involved in Margot’s tumultuous life

Psychotherapist Sibyl (Virginie Efira) decides to finally take a step back from her work to return to her true passion of writing fiction. She parts ways with a majority of her patients and does not intend on taking on any new ones. However, when she receives an unexpected phone call from up-and-coming actress Margot (Adèle Exarchapoulos) begging for her services and help, she becomes enthralled by the young woman’s plight, finding parallels between her and her own past and eventually taking the girl’s troubles and turning them into her “fictional” book.

While Justine Triet’s “Sibyl” may come across as exciting from that description, the film, unfortunately, does little with that premise. In fact, the film does little in even explaining that premise. If someone went into this completely blind without reading any sort of synopsis or logline, I genuinely do not know how they would follow or learn certain information. The film starts right with the action so abruptly, leaving no room for exposition or to even think about what could be going on. There’s a fine line between trusting your audience’s intelligence and withholding too much information; it felt as though chunks of the movie were completely cut out.

The editing is far and away this film’s downfall. It will cut from action to action, scene to scene, so abruptly that you have no time to fully process what is going on. It also makes it difficult to set the scene and properly understand where exactly you are in the story time-wise. This also makes the pacing incredibly awkward, as it never feels like it is a stylistic choice to edit this way or that it allows the film to feel like it is going at a fast pace. The film keeps moving along and the viewer must constantly struggle to keep up with it. The film also incorporates flashbacks to Sibyl’s tumultuous relationship with her ex-boyfriend, but we are never given any context or background to properly understand this or really care. We aren’t given nearly enough time to appropriately establish her current day-to-day life and what her situation is with her current partner and family to then be able to compare the past and the present and how this may affect her. Even an accurate timeline of events feels murky.

The edit feeds into another problem I have with the film, which is the way in which its characters are developed and fleshed out (hardly at all). We aren’t given the proper background or exposition to understand or care about these characters, making them come across as very one-dimensional. The character of Margot (while played wonderfully by Adèle Exarchopoulos) is reduced to being merely a crying mess every time she is onscreen, and I feel as though I have more questions about her character than answers (likewise with Sibyl herself and the other supporting characters). Exarchopoulos makes the most out of what is written and evokes a presence that makes her interesting to watch, but there’s hardly anything there beyond a surface level. With Sibyl, we’re never given a real look inside her head or what her motivations are that when we reach the third act and her downfall, I care very little about her or what is happening to her.

A key part of this film is its central relationship between a therapist and her patient, which I have a lot of problems with. It is clear from the beginning that Sibyl is not invested in her job anymore, yet she takes on Margot as a patient basically against her will. She seems to show little empathy towards Margot (or any of her patients, really) and offers her questionable advice when it comes to her decision to get an abortion. We are never given the context that she is that fascinated by Margot’s story and her interest in making that her book, so before we know it she is secretly recording their sessions, which is obviously illegal and unethical. The breach of trust with which Sibyl is breaking in stealing Margot’s story and become too involved in her life feels wrong. And if the film was merely showcasing someone going too far or just being bad at their job, that could be enough. However, we also see Sibyl’s regular meetings with one of her colleagues who acts as her own therapist and he also gives terrible advice and cares little about what Sibyl does with her patient or at least with what he knows about. The film’s portrayal of therapy and this relationship is inaccurate and irresponsible, making the film feel incredibly off-putting in that regard.

As far as any positives on the film, it is very well shot, particularly with its shot composition and framing. The subtle repeating theme of mirrors, while a tad on the nose as far as a metaphor, does look quite nice. The bright color palette with its use of reds and blues (though Almodóvar-lite) is eye-catching. The film is competently made as far as visuals, and none of the acting by the cast is bad or out of place. Like I said before, Exarchopoulos is quite good despite the role she is given.

“Sibyl” just never became a film I could get behind. I’ve heard some critics say, “well it’s trashy dramatic fun,” but I don’t think it even reaches that. It never gets to a point where it is so over-the-top that it becomes camp or even a thriller. It just comes across as a mess due to its sloppy editing and lack of characterization. I don’t doubt that Triet could make a good film in the future, but the editing and script severely hold this film back from ever being anything more than a sloppy attempt at an erotic thriller or character study. For a film this simple, it has no excuse being so confusing or hard to define.