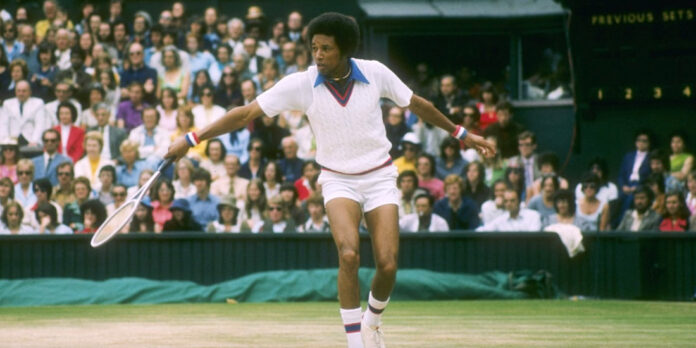 THE STORY – Explores the tennis career of Arthur Ashe and his impact on tennis and HIV activism.

​​​”Citizen Ashe” is a new documentary that focuses on the life and career of Arthur Ashe, one of the tennis world’s most towering figures. His athletic career spanned four decades and transformed the tennis world in the process. He won three Grand Slam singles titles, was the first Black player selected to the United States Davis Cup team, and was the only Black man ever to win the singles title at Wimbledon, the US Open, and the Australian Open. Such sports accomplishments are enough to populate an entire documentary, but “Citizen Ashe” does not stop there. His life outside of tennis put him smack in the middle of the American and South African civil rights movements and, later, the AIDS crisis. If this sounds like an ambitious subject to tackle with a single movie instead of what could have been done with a miniseries, that’s because it is. All the more so when the film in question is only 96 minutes long. So does this short film do justice to Ashe’s massive legacy? Sort of. It does more justice to Ashe’s story than most projects have to date, but it still only seems to scrape the surface of who the man was and the indelible legacy he left behind.

Co-directors Rex Miller (“Althea”) and Sam Pollard (“MLK/FBI”) were able to access previously unseen footage from Ashe’s life, making this a worthwhile experience for anyone who is a fan of the man, the time period, and the sport of tennis. This footage is particularly notable because it features Ashe himself dishing out thoughts on his life and events as the film’s timeline moves on. Thus, the film has a leg up on most approaches to Ashe’s story by virtue of saving the filmmakers and interviewees the trouble of summarizing or guessing what Ashe might have been thinking at any point during his life. Instead, we know because Ashe is able to tell us directly on camera. This impressive level of insight allows Miller and Pollard to structure much of the film around Ashe narrating his own story, making it feel all the more personal and thus, connecting us more to his story. This level of intimacy and insight really helps “Citizen Ashe” shine amongst other sports documentaries to be released recently.

Unfortunately, even with this intriguing approach, there is too much to cover in Ashe’s life, and not all of it is touched on. Miller and Pollard secured interviews with many political activists and athletes to share their thoughts on Ashe’s life alongside the rediscovered footage of Ashe’s interviews. However, even when the film chooses to hone in particularly on Ashe’s political activism, the scope is too big for a less than two-hour film to handle, making this feel like an in-depth Wikipedia article. The narrative whisks through Ashe’s athletic career to get deeper into his activism, hoping to draw political and social connections to today’s world. The film doesn’t spend much time on his later years battling his HIV diagnosis or fighting to bring public attention to that important cause either. Both his rise through the tennis ranks and his HIV activism could have been their own films but forcing them into such a tight runtime robs them of the power they could have had. By choosing not to focus on either of those chapters of his life or his political activism specifically, the film fails to do justice to any of the three.

Despite all of this, “Citizen Ashe” is undoubtedly enlightening, more so than any film about Ashe to date. The filmmakers recognize that Ashe’s story and activism are as relevant today as they were 40 years ago, and they do their best to illustrate this through their storytelling. The final product makes it clear just how influential and essential Ashe was not just to the world of tennis but to many different types of people all over the world. However, it never wholly gets under his skin, even with the illuminating access to his personal interviews. It whets the appetite for the definitive Arthur Ashe story, but it doesn’t quite become that itself.