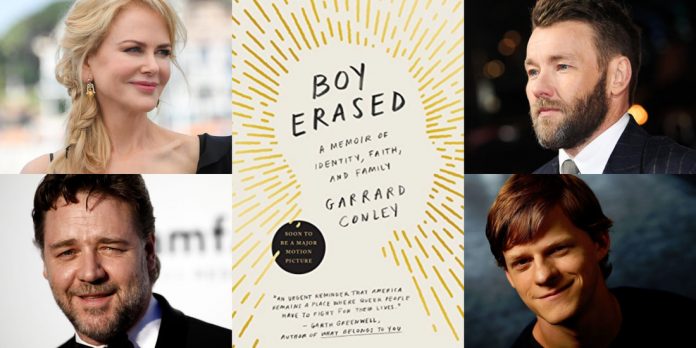 A few weeks ago, we put up a poll for you all to select sources of material that could be potential contenders for Best Adapted Screenplay this year. The top 3 choices (Boy Erased, First Man, Beautiful Boy with a special episode for The Incredibles 2) are all going to have their source material examined by us on the show with an in depth discussion into the work’s themes, characters and our predictions as to how it will all translate to the screen. These podcast episodes are exclusive to our Patreon subscribers but we have included a preview of the latest episode after the jump. For the small price of $1 a month, you can get the full episode, so be sure to subscribe here.

For the first episode of Next Best Adaptation myself, Jacey Aldredge, Nicole Ackman and newcomer Lynde Smith all read Garrard Conley’s novel “Boy Erased” which will be released September 28th. The adaptation is being directed and written by Joel Edgerton (Who also has a key role in the film as well) and co-stars Lucas Hedges, Russell Crowe and Nicole Kidman.

Thank you and please feel free to subscribe to the Next Best Picture Podcast on either ​SoundCloud, Tunein, GooglePlay, iTunes, Stitcher, Player FM & CastBox.

You can follow Will, Jacey, Nicole, & Lynde and hear more of their thoughts on the Oscars and Film on Twitter at @mavericksmovies, @jaceyaldredge, @nicoleackman16 & @lynden.smith