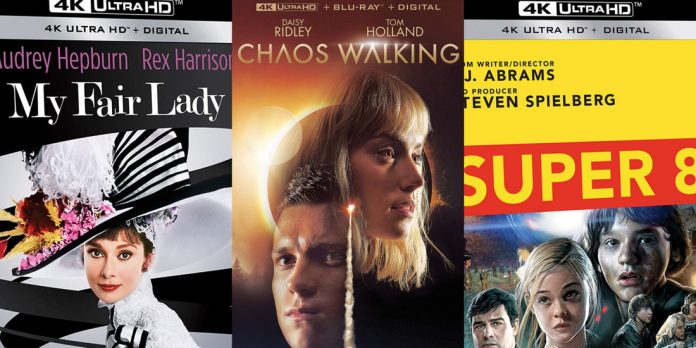 This is a stacked week for 4K upgrades. There are also some exciting new releases and unique titles from boutique Blu-ray labels coming to home media.

Click below to see what is coming out this week on physical media!

​Arrow Video is releasing a 4K of the 1966 Spaghetti western “Django,” directed by Sergio Corbucci and starring Franco Nero, Gino Pernice, Giovanni Ivan Scratuglia, Silvana Bacci, and Alberto Dell’Acqua. This release includes a 4K UHD and a Blu-ray disc. It also consists of another Franco Nero film, “Texas, Adios,” directed by Ferdinando Baldi. Included in this release are interviews with Nero on both films, commentaries on both films, and several interviews with the casts and crews of each film.

Arrow is also releasing a box set this week titled “Weird Wisconsin: The Bill Rebane Collection” in a limited edition four-disc set. This includes six films all new to Blu-ray with new restorations: “Monster A Go-Go” (1965), “Invasion from Inner Earth” (1974), “The Alpha Incident” (1978), “The Demons Of Ludlow” (1983), “The Game” (1984), and “Twister’s Revenge” (1988). This includes a multi-part interview with Rebane on each of the films, along with a new feature-length documentary on Rebane and a 60-page collector’s booklet.

​​Shout Factory has a couple of releases this week from their various labels. From Shout Select comes the 1985 Joe Dante film “Explorers,” starring Ethan Hawke, River Phoenix, Bobby Fite, Bradley Gregg, and Danny Nucci. It includes both the home video and theatrical cuts of the film. This release features new interviews with the cast and crew and deleted scenes with optional director’s commentary.

Another Shout Select release this week is the 1994 sequel to “City Slickers” titled “City Slickers II: The Legend of Curly’s Gold.” Directed by Paul Weiland, this stars Billy Crystal, Daniel Stern, Jon Lovitz, and Jack Palance. It includes an audio commentary track with Weiland, Stern, and Lovitz and a making-of documentary.

From the standard Shout Factory label, we have the 1981 horror film “The Hand,” directed by Oliver Stone and starring Michael Caine, Andrea Marcovicci, Annie McEnroe, and Bruce McGill. This features a new 2K restoration from an interpositive. It also includes new interviews with the cast and crew and an audio commentary track with Stone.

​Finally, we have two Debbie Reynolds films from the 1950s from the Warner Archive Collection coming to Blu-ray this week. The first is “The Tender Trap” from 1955, directed by Charles Walters and starring Reynolds alongside Frank Sinatra, David Wayne, and Celeste Holm. This features a new 4K restoration from the original camera negative, along with a featurette on Sinatra in the 1950s and two excerpts from “The MGM Parade” featuring Reynolds.

The other Warner Archive release this week is “Athena” from 1954. Directed by Richard Thorpe, this stars Jane Powell, Edmund Purdom, Debbie Reynolds, Vic Damone, and Louis Calhern. This is newly remastered and includes outtakes for several of the musical numbers seen in the film.

This week, I wanted to recommend a release that was one of the first that I covered in late 2020 when it came out that I feel is a must-own: the 4K release of the 1990 sci-fi action film “Total Recall.” Directed by Paul Verhoeven, this stars Arnold Schwarzenegger, Rachel Ticotin, Sharon Stone, Ronny Cox, and Michael Ironside. I’ve slowly started getting into action films this past year, and Verhoeven is very much my thing; this film is such a blast. It’s a lot of fun to watch and creates a unique world in its take on life on Mars (obviously also coming from the Philip K. Dick source material).

Beyond just being a fan of this film, this is one of the best and most stacked releases I have seen from a major studio. This includes three discs: a 4K UHD disc and two Blu-ray discs with one exclusively for supplements (though the other two discs also have several special features). The film looks beautiful with its vibrant colors, featuring a new 4K restoration supervised and approved by Verhoeven. Included on this release are several featurettes and documentaries on the film and the studios and crew behind it, as well as an audio commentary track with Verhoeven and Schwarzenegger available on both the 4K and the Blu-ray. This is such a stacked release for a great film that I would highly recommend, even as a blind buy!