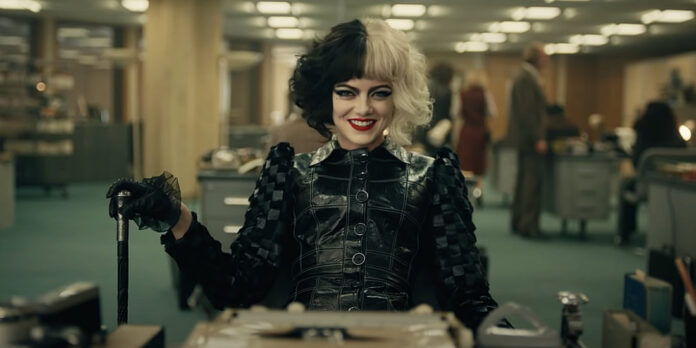 THE STORY – Set in the 1970s in London during the punk rock movement, the film follows Estella de Vil, an aspiring fashion designer, and explores the path that will lead her to become a notorious criminal known as Cruella de Vil.

There are countless villains in the Disney catalog that could be considered iconic. Scar from “The Lion King,” Ursula from “The Little Mermaid,” Maleficent from “Sleeping Beauty,” or my personal favorite, Hades from “Hercules.” And yet, only one villain has warranted an animated feature, two live-action films, and now, a prequel film. Stepping into the black and white shoes of Cruella de Vil is no easy feat, but thankfully, Academy Award-winning actress Emma Stone is up to the task.

In 1970s London, Estella (Stone) spends her days running small-time grifts with her pals Jasper (Joel Fry) and Horace (Paul Walter Hauser) while dreaming of becoming a fashion designer. After catching the eye of the notoriously ruthless Baroness von Hellman (Emma Thompson), Estella’s dream may come true. Naturally, this sets Estella on the path to eventually embrace her evil side, becoming Cruella in the process.

An impeccable cast does much of the heavy lifting in “Cruella.” Stone is delightfully devilish, delivering a fresh, believable take on the villainess. She had huge, campy shoes to fill, following up on Glenn Close’s iconic take of Cruella in “101 Dalmations,” but she carries this film on her back with a uniquely high level of theatricality that she makes it look easy. As the Baroness, Thompson seems to similarly relish her evil role, effortlessly chewing the scenery without ever losing her natural razor-sharp wit. Pitting the two Emmas against each other is one of the best casting decisions we’ve seen from Disney in years as the two trade pages of dialogue with one another, seeing who will intimidate the other.

Director Craig Gillespie (“I, Tonya“) strikes a perfect balance between serious and silly, realism and fantasy. They’re fine lines, but “Cruella” nails it with a supreme level of confidence. While too many of the recent Disney live-action remakes of classic animated films can feel overly stuffed with CGI and visual effects, excellent production design brings the world of “Cruella” to life in a much more grounded way than before. The visuals are stylized, to be sure, but believable. There’s an edginess to it, a sort of Disney-fied punk rock vibe to the film. It doesn’t seem like it should work, but it’s executed flawlessly.

Even with the pitch-perfect performances of Stone and Thompson, it’s the costumes that truly steal the show. Given the herculean task of designing an entire period fashion line along with reinventing the look of an iconic fashion-obsessed villain, costume designer Jenny Beavan (“Mad Max: Fury Road” and “The King’s Speech”) and her team truly have outdone themselves here. They deliver dozens of stunning looks of all kinds, which no easy task when costuming someone as stylish as Cruella. Her disruptive styles are imaginative and bold, like a dress seemingly made from literal garbage that is somehow stunning. The Baroness’s lines are more high fashion, with numerous breathtaking looks. Even the everyday streetwear is impressive throughout. This is an awards-worthy level of costume design that will be difficult to top this year.

As a character, Cruella is chaotic. The film essentially diagnoses her with split personalities, something I didn’t see coming in a Disney movie. Yet, the pacing of the film doesn’t always match the chaos of the main character. Gillespie’s latest drags here and there, especially towards the end after keeping up the energy and momentum for two hours due to his frantic editing and dynamic camerawork. Even his rockin’ soundtrack starts to wear out its welcome after the obvious music choices become too many too frequently (and drown out composer Nicholas Britell’s otherwise fantastic score). The runtime is undoubtedly overlong. With this uniquely fun story, killer cast, and marvelous design elements, a tighter film would’ve served it better.

“Cruella” doesn’t really feel like a Disney movie, and I truly mean that as a compliment. It’s much darker than one might expect but never takes itself too seriously. The PG-13 rating was a very wise choice, following “Mulan’s” lead, allowing this to be set apart from the glossy, nearly shot-for-shot remakes Disney’s become known for in recent years. While I wouldn’t say that “Cruella” breaks the mold, it at least has a strong sense of its own style. Here’s hoping future Disney remakes can be as striking and rebellious.