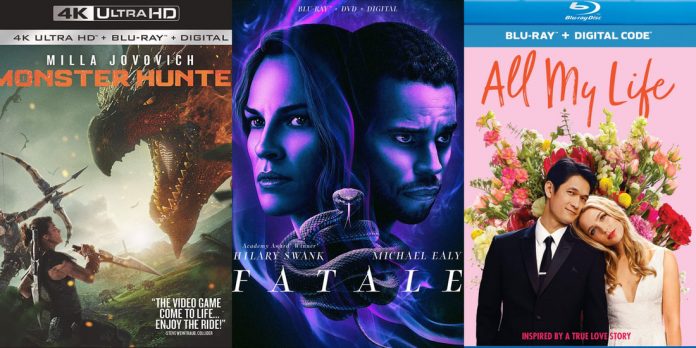 This week in Blu-ray releases, the priority is 2020 films. From sci-fi action to horror to documentary, a wide range of 2020 films are coming to Blu-ray. Plus, a 2000s teen comedy and some classic 40s pictures!

​Finally, Kino Lorber is releasing three classic Bob Hope films on Blu-ray this week: “Caught in the Draft” and “Nothing But the Truth,” both from 1941, and “My Favorite Blonde,” from 1942. Each film is newly remastered and includes new and archival extras, such as commentaries and theatrical trailers.

​This week, I wanted to highlight a release I received as a Christmas present and one that I watched recently and was absolutely blown away. In late 2020, the “Alfred Hitchcock Classics Collection” box set was released on 4K (along with standard Blu-ray discs included). It was at the top of my wishlist as it contains my three favorites of his films (“Rear Window,” “Vertigo,” and “Psycho”), as well as “The Birds,” an iconic film that I am mixed on but is still a must-see. I adore this set’s packaging, featuring a hard slipcover over a booklet-style digipak housing all the films and featuring era-specific artwork. My one complaint about the packaging is that the discs are a little difficult to remove, so you have to be careful and know what you’re getting into.

Full disclosure, I have not watched all of the films in the set on these discs, though as I said, I have seen all of them previously. However, this week I watched “Vertigo” and was absolutely gob-smacked at how incredible it looked. Obviously, I was already aware of this film’s beautiful cinematography, but the newest restoration in this set is truly spectacular, with some shots feeling brand new. The red and green color palette leaps off the screen, while the gorgeous San Francisco exteriors feel like photographs come to life. If every film in this set is treated this well as far as restorations, this set is a must-own. There are also tons of special features included for each film, so if you are a fan of classic film and Hitchcock, this set comes highly recommended by me.

​
​Are there any releases you will be picking up this week? Let us know in the comments section below or on our Twitter account.