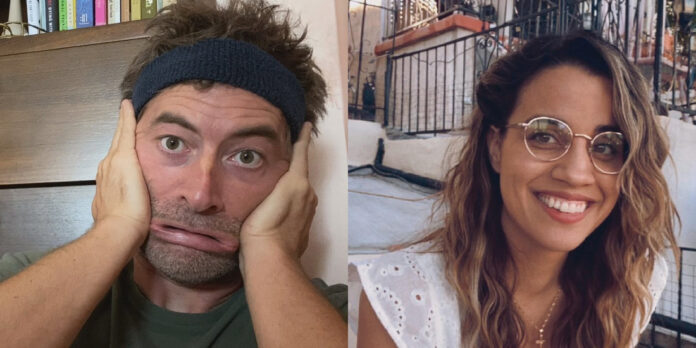 THE STORY – When Adam’s husband surprises him with weekly Spanish lessons, he’s unsure about where or how this new element will fit into his well-structured life. However, when an unexpected tragedy turns his life upside down, Adam decides to carry on with the lessons and develops a complicated emotional bond with his Spanish teacher, Cariño. But do you really know someone just because you’ve experienced a traumatic moment with them?
​
THE CAST – Natalie Morales, Mark Duplass & Desean Terry​

It’s now been a year since the world went into quarantine, and what a year it’s been. You can’t keep good creative people down, though, and filmmakers have risen to the occasion of making films in these adverse conditions. Some have kept their cast & crew small and isolated (“Malcolm & Marie“), others have put in place strict social distancing guidelines (“How It Ends“), and others have kept it lo-fi and embraced the Zoom of it all, like Natalie Morales’s directorial debut “Language Lessons.” Scripted with King of Mumblecore Mark Duplass, the two also star as Cariño, a Costa Rican distance Spanish teacher, and Adam, a self-described “creature of habit” whose routine gets upended when his husband buys him 100 Zoom-based Spanish lessons as a present (Adam already knows how to speak Spanish, but opined that he felt it falling away from him). Adam and Cariño have a nice first session, but the rug gets pulled out from under both of them for their second, which occurs just after Adam experiences a huge personal tragedy. Through this accident of fate and over the course of several months of video messages, chats, and Spanish lessons, the two end up bonding and developing a kind of love for each other.

It’s a slim premise, to be sure, but what magic they make of it! The distance from our loved ones has been maybe the hardest part of the past year, and “Language Lessons” deftly packs all of the emotions that have been swirling around the world in 2020 and early 2021 into one intimate little package. Morales and Duplass have wonderful platonic chemistry together, and watching them navigate their deepening relationship is painfully relatable to anyone who has spent the last year relying on video conference calls in an attempt to recreate the social intimacy we’ve lost. The more time we spend with Adam and Cariño, the more we feel for them, mirroring their growing feelings for each other. Because this is a movie, and there needs to be some form of intrigue somewhere, Morales and Duplass do throw some roadblocks in the characters’ ways, and they don’t always feel organic. But the two play off each other so well that we buy what happens anyway.

“Language Lessons” ends up being a very special film, not just because of its form, but because of how it observes human connection – how we need it, how we can be afraid of it, and how we offer it to others. Even though the two characters only converse via webcam, their connection is palpable and powerful. This makes the inevitable moments of disappointment and anger sting even more because we can feel how much this connection means to both characters. In part, it is a surprisingly emotional experience because true human connection has been so rare this past year, but also in part because Morales and Duplass are giving such deeply lived-in, open-hearted performances. It’s impossible not to fall in love with them, to want them to open up to each other and embrace each other in the way that only the truest of friends can (the fact that Adam’s gayness completely closes off any opportunity for a romantic relationship is a godsend). By embracing the best of humanity when it’s at its lowest point, “Language Lessons” becomes essential viewing, a miniature masterpiece of humanism that beautifully distills a whole year’s worth of love, loss, introspection, and empathy into an hour and a half. It’s impossible not to fall in love with it.