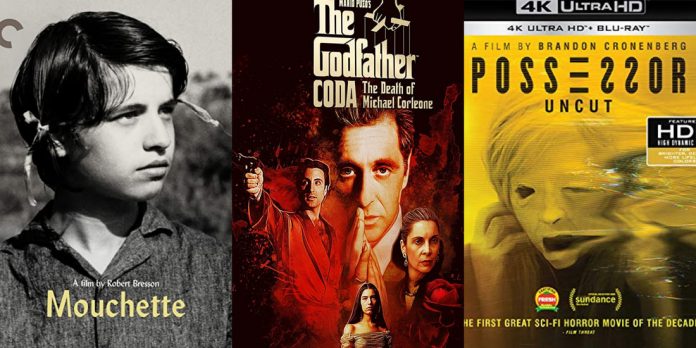 ​​Hello and welcome to what will now be a weekly segment here on the site where I do a quick overview of some of the films being released on physical media this week for Blu-ray, 4K, special editions, or boutique labels! I am a big proponent of physical media and preserving film history, on top of building my own Blu-ray collection this past year, so this will be a treat. Let’s get started!

​As for the Criterion Collection, this week, they have Blu-ray upgrades for two films previously only available on DVD: Robert Bresson’s “Mouchette” and “Symbiopsychotaxiplasm: Two Takes by William Greaves.”

In addition to discussing new releases each week, I also wanted to take the time and recommend a disc from my own personal collection in case any of you are looking for recommendations for holiday gifts or the next time there’s a particular sale! This week I wanted to recommend the Criterion Collection release of “True Stories,” directed by David Byrne. I am a big fan of Talking Heads’ music and David Byrne in general, and this film, as Byrne’s only directorial effort, is a must-own for fans of the artist. This 1986 film follows Byrne’s unnamed narrator as he travels around the fictional town of Virgil, Texas, as the town prepares for its 150th Anniversary and “Celebration of Specialness.” Throughout the film, he interacts with various quirky characters, including a bachelor looking for love (John Goodman), a rich woman who doesn’t leave her bed (Swoosie Kurtz), and a prominent married couple who do not speak to each other (Spalding Gray & Annie McEnroe). It is a very quirky and silly film that nonetheless has a big heart and is overall a great time. The film feels like a combination of Wes Anderson and David Lynch, with its small-town charm, quirky characters, and bright colors.

​In addition to being an excellent film, the release by Criterion is next-level. The 4K transfer allows Ed Lachman’s cinematography to leap off the screen in all its vibrant glory. There are quite a variety of special features and interviews on the making of the film by everyone involved. However, perhaps the highlight of this release is the packaging. Beyond the iconic cover of John Goodman’s upside-down head, you get a pulpy newspaper-style pamphlet containing several essays and photos of the cast and a CD of the film’s soundtrack of songs performed by Talking Heads and the cast. Not only has this become one of my favorite films, but the entire release from Criterion contains everything you would want for a special Blu-ray release and what makes collecting so special. So, the next time there’s a Criterion sale on their website or Barnes & Noble, or if you wanted to add something to your holiday wishlist and are a fan of quirky musical-comedies, I would highly recommend checking this one out!

So, will you be picking up any of these releases? I personally will probably be purchasing those 4K releases of “Total Recall” and “Collateral.” What upcoming Blu-ray releases are you looking forward to? Are there any special releases that you asked for for the holidays? Let us know in the comments section below or on our Twitter account.