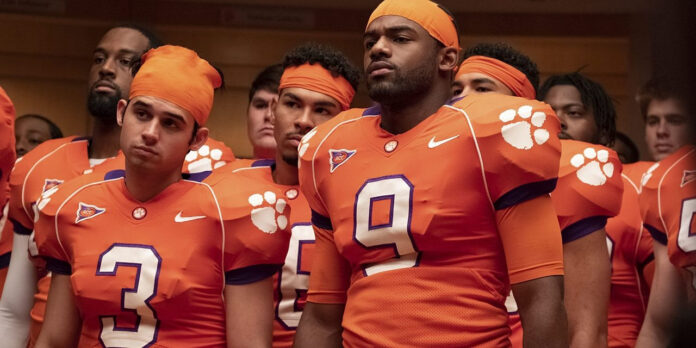 THE STORY – An 18-year-old student puts his football scholarship on the line when he steps up to take custody of his 11-year-old little brother after their mother enters an extended stay at a drug rehab facility.
​
THE CAST – Jay Reeves, Thaddeus J. Mixson, Corinne Foxx & Luke Tennie

​​​There are certain genres of film that are sure to elicit a very specific response from audiences. When it comes to sports dramas, one can quickly imagine a host of scenarios designed to capture an uplifting feeling that keeps an audience invested in the minutia of not only the sporting events but also the characters involved. One’s mileage may vary in terms of investment of the actual game itself, but the territory is still there to examine an emotionally resonant story. That is precisely what is at the heart of “Safety,” and it manages to convey its intentions earnestly, if not always innovatively.

The film tells the true story of Ray-Ray McElrathbey (Jay Reeves), who arrived at Clemson University on a football scholarship with serious intentions to also pursue his academic studies. He sees college as a significant chance to break free from the circumstances of his upbringing that saw him surrounded by poverty and neglected by his drug-addicted mother. However, the pressures of balancing sports and schoolwork are not the only things he has to deal with. When his mother gets arrested and finally enters a rehab program, it leaves his younger brother Fahmarr (Thaddeus J. Mixson) at the hands of the foster care system. Determined not to abandon him, Ray secretly brings Fahmarr to the campus to look after him. Conflicts arise at every turn, but the most crucial decision Ray faces are choosing either the future that football can grant him or the stability he must maintain for his family.

Without a doubt, the most impressive element of the film is the central performance from Reeves. He exudes an infectious charm in every scene, and his charismatic screen presence is quite captivating. His more dramatic moments can be inconsistent, but when called upon to deliver the more powerful punches, he serves those moments well. Mixson also delights in a portrayal that is not cloying or cynical, presenting a child performance that feels naturalistic. There are a few supporting players who make an impact, like Amanda Warren as the boys’ tortured mother and James Badge Dale as one of the university’s stern yet sympathetic coaches. They are the few notable standouts in an ensemble that is dependable, if not extraordinary.

Director Reginald Hedlund tries to bring some flair to the filmmaking, and often his efforts are appreciated. While not the most daring of exercises, there is a good mixture of serious and light-hearted tones that are balanced in a way that is appealing for family entertainment. It is particularly heartening to see Black characters centered in a way that makes their struggle authentic but not manipulative. In many ways, it feels like an answer to many of the criticisms lodged at films such as “The Blind Side,” and there is much appreciation for the perspective here. There is an emphasis on the hardships being faced by these individuals with a clear sense of pride and self-worth, and it’s a worthy message to be spread.

Still, the conventions of most films within this genre are not totally avoided and that is what contributes to the film not breaking free from its mediocrity. The script from Nick Santora heavily indulges in shallow character explorations and stale dialogue, the latter of which is particularly felt in the awkward comedy. While the dynamics of the family conflicts are more intriguing than any of the sports depictions, the story’s scope still feels meandering. It loses the focus to make a meaningful impact. By the time the climax approaches, the predictable customs of manufactured tensions that lead to a rousing speech follow very familiar patterns. This story’s foundational elements do not stray away from the traditional norms, which makes much of the narrative feel wooden and expected.

A movie like “Safety” ends up offering a recognizable structure that plays out in an entirely foreseeable way. Despite being based on factual events, there isn’t much that ends up striving away from paths that make most of its outcome anticipated. Despite some endearing performances and a pleasing tone, those trappings are not avoided and what is present is a mostly average affair. Still, it plays well within the confines of what many sports dramas have set out to do in the past. If one finds comfort in that, there’s plenty to admire here. For anyone seeking more substantive storytelling, one may need to look elsewhere.