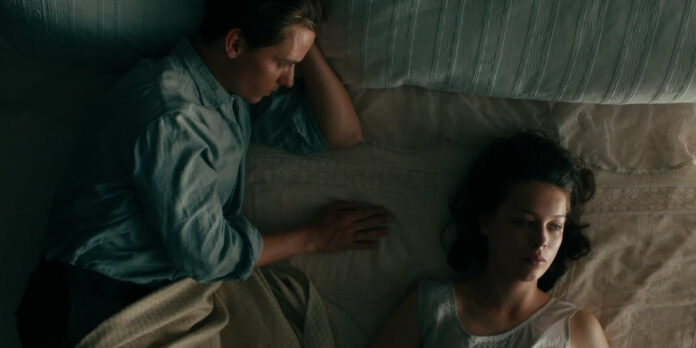 THE STORY – When two German art students fall in love, the girl’s father, who has a devastating secret, vows to end their relationship.

When Clive Owen and Cate Blanchett opened the envelope, the surprise winner was Germany’s little-seen “The Lives of Others,” written and directed by young filmmaker Florian Henckel von Donnersmarck.  And when “The Lives of Others” finally opened across the country, audiences finally got to see what all the fuss was about.

Now, twelve years later, we have an even bigger dog back in the race — Alfonso Cuarón’s “Roma,” which has been nominated for 10 Oscars, including Foreign Language Film, a category which “Roma” is heavily favored to win.  But guess who else is back?  Florian Henckel von Donnersmarck, looking to slay another big dog with his first foreign language film in over a decade.  And like “The Lives of Others,” it’s very very good.

“Never Look Away” is very loosely based on the life of contemporary artist Gerhard Richter, though not loosely enough for Richter who apparently hates the film even though he has yet to see it.  In “Never Look Away,” the artist character in question is named Kurt Barnert (Tom Schilling), who, while studying in Düsseldorf, develops his distinctive style of painting that brings him worldwide fame in the 1960s and ’70s. Instead of taking the approach of such biopics as “Lincoln,” in which the life of a man was told through one narrow period of time, von Donnersmarck opens up the artist’s life to an almost-epic scale being a witness to huge events, both historical and artistic.

Growing up in Dresden, young Kurt develops a love for art when, at the age of five, he is taken to an exhibition of “degenerate art” by his Aunt Elisabeth (Saskia Rosendahl) who urges him to never look away because everything that is true holds beauty in it.  She repeats her advice as she is being dragged away by the Nazis who believe that she is schizophrenic and who, deeming her inferior, summarily execute her under the orders of SS member Prof. Karl Seeband (Sebastian Koch).

Following World War II, Kurt follows his dream and attends Dresden Art School where he meets and falls for Elizabeth (Paula Beer), a fellow student whose dreams dovetail with Kurt’s.  His love for Elizabeth is the only joy for Kurt in a school that deems that art must reflect the principles of the state — in this case, Communism.  It is at that moment that Kurt realizes that he and Elizabeth must get to the West in order to ensure that they can have both their personal and artistic freedom.

Von Donnersmarck is not afraid to take on the big themes — the fall of Nazism, the rise of Communism, the role of contemporary art in the global culture, etc.  But he throws in a romance and a twist — not a spoiler because it is revealed early on that Elizabeth’s last name is Seeband, and she is the daughter of the SS officer who ordered the killing of Kurt’s aunt.  Complications ensue.

The performances in “Never Look Away” are strong across the board, but the real star of the film is the ravishing cinematography of Caleb Deschanel, for whom “Never Look Away” marks his sixth Oscar nomination.  It’s not just in the big set pieces such as the bombing of Dresden that Deschanel’s work shines but also in the overall painterly look in his palette and his framing in the more intimate scenes.  It’s such an appropriate take in a film about art.

With the exception of the 2010 Johnny Depp/Angelina Jolie starring “The Tourist,” von Donnersmarck’s unfortunate detour into Hollywood studio filmmaking (the less about which is said the better), his short filmography reveals that he is a writer/director who is deliberate and not afraid of taking his time (much like “Never Look Away”).  Could the film have been shorter?  Of course.  But watching “Never Look Away” is like settling in with a lengthy novel that, despite meandering now and then, turns out to be a very satisfying read.  Or in this case, a very satisfying film.