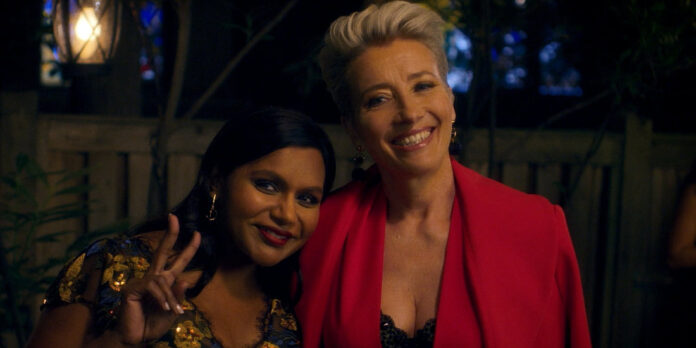 THE STORY – Katherine Newbury (Emma Thompson) is a pioneer and legendary host on the late-night talk-show circuit. When she’s accused of being a “woman who hates women,” she puts affirmative action on the to-do list, and—presto!—Molly (Mindy Kaling) is hired as the one woman in Katherine’s all-male writers’ room. But Molly might be too little too late, as the formidable Katherine also faces the reality of low ratings and a network that wants to replace her. Molly, wanting to prove she’s not simply a diversity hire who’s disrupting the comfort of the brotherhood, is determined to help Katherine by revitalizing her show and career—and possibly effect even bigger change at the same time.​

​​​The 2019 Sundance Film Festival has found its “Eighth Grade” and “The Big Sick.” Mindy Kaling strikes absolute gold with her brilliant, hilarious and topical screenplay “Late Night,” which is sure to entertain audiences, all the while commenting on a series of topical issues including sexism, racism, feminism, ageism and almost every other ism you can think of in the workplace. Here, that workplace is a boys only writer’s room, led by the highly opinionated, strong-willed and once great but now declining talk show host Katherine Newbury, played with fiery wit, intelligence and exuberant energy by the wonderful Emma Thompson. Mindy Kaling also stars in the film as the new addition to the writer’s room, as she uses her wit both in character and as an actress to win us over, making “Late Night” one of the most entertaining highlights of 2019.

English comedian Katherine Newbury, was once a legendary late-night television talk show host, whose career has been slipping her with ratings over the last 10 years. Unable to connect with audiences and with the people in her own work environment (she barely talks to any of her staff writers, let alone met some of them, assigning them with numbers for identification instead of their actual names), she’s clearly out of touch and in need of a change. Otherwise, shes faces certain replacement from her network. In comes Molly (Mindy Kaling), an unqualified factory worker who is hired to be the new writer on Katherine’s team. At first, brought on as a minority token hire to fill a diversity quota, Molly gradually shows her male co-workers and controlling boss her talent and teaches them all (and us) valuable lessons on equality.

Kaling’s script is a laugh a minute, pitch-perfect screenplay which manages to touch upon a number of topics in the modern day workplace in a post #MeToo world, including those listed above, along with white privilege and entitlement. Molly’s journey is not easy and there are many obstacles in her way. But like any great story, it’s her wit, intelligence, and sheer determination which makes her a character worth rooting for in an environment that desperately needs change. Her writing is never preachy nor condescending to its audience. In fact, it’s complex, clever, humorous and involving. Credit has to be paid also to director Nisha Ganatra, who gives the film a terrific sense of pacing where not a single joke, moment or character feels wasted for the cutting room floor. All of the supporting characters (including the men in the writer’s room) are given a chance to breathe, to flesh out their characters and make an impact on either Molly or Katherine’s stories.

Which brings us to Emma Thompson. In a comedic tour de force performance, Katherine Newbury is one of Thompson’s best characters as she gets many opportunities to showcase her best and worst qualities. She’s commanding when she needs to be and can be seen as a bit of a monster at times for her patronizing attitude towards others. However, Kaling’s script gives Thompson the right amount of depth that an actress of her caliber needs to deliver a fully dimensional performance, one that feels relatable and filled with pathos. Kaling is also excellent as the intelligent but seemingly unqualified writer who is thrust into the non-PC world of male writers. Despite the fact that she hasn’t worked in television before, Molly is every bit as sharp and in many cases, more brutally honest than any of her co-workers. Providing fearless feedback to her co-workers and yes, even at times, her dominating boss, it’s her strength and courage that catches the eye of Katherine and puts Molly on a trajectory to achieving greatness not only for herself but also for Katherine and the network they work for.

I cannot shower enough praise on “Late Night.” It’s a delightful crowd-pleaser which will surely be one of the breakout comedies of 2019. It’s smart, thoughtful and rewarding in its performances and character arcs. By the time we reach the third act’s conclusion, not a single character decision has felt contrived or not well thought out by Kaling. It achieves a perfect symmetry which few other films can. Some may call this predictable. I call it perfect execution. Aided by a charming cast of actors in supporting roles (including a warm and always reliable John Lithgow, who plays Katherine’s ill husband), Kaling and Thompson provide audiences with one of the most fun and rewarding watches of the year. Guaranteed to put a smile on your face, “Late Night” earns the privilege of our time.