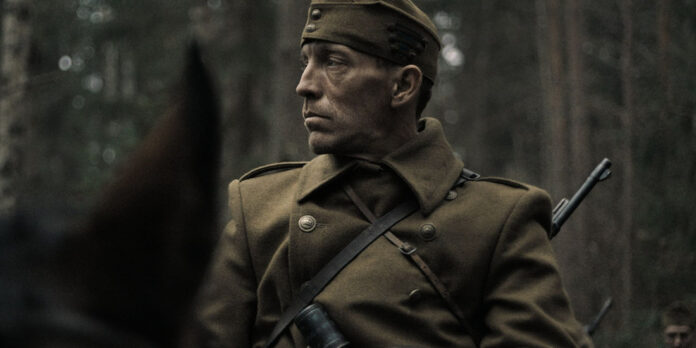 THE STORY – 1943, World War II. A long winter is about to begin in the endless territories of the occupied Soviet Union. István Semetka is part of a special Hungarian unit tasked with travelling from village to village looking for partisan groups. While heading towards a remote village one day, the company falls under enemy fire and their commander is killed. As the highest ranking officer, Semetka must take over. Wading through a vast swamp, he guides the survivors back to an occupied village where they reconvene with their division.

​​At this point, there have been so many films made about WWII that it is hard to imagine that there is anything new to say about it, a wide-ranging, earth-changing event that it may have been. Dénes Nagy’s “Natural Light” is yet another WWII film that deals with the morality of Germans and German allies during this time period, specifically a group of Hungarian soldiers trekking from village to village through Ukraine looking for partisan groups. After they get ambushed and their commander is killed, Istvan Semetka (Ferenc Szabó) becomes the ranking officer. Going back to the last village they occupied, Semetka is faced with the question of what to do with the villagers, who likely tipped off the ambush.

War is hell, and in “Natural Light,” it is an especially muddy one. The wintry landscape is full of dirt, and Tamás Dobos’s cinematography casts a brown pall over everything – even the sky looks brown – that gives the film a unique beauty. The muddiness also applies to the characters’ morals: Semetka would clearly rather not resort to violence but does whatever he’s told without question, a stand-in for the thousands of German soldiers who were “just following orders.” Kindness peeks through his stone-like countenance every once in a while, but even when reinforcements arrive at the village and their commander, an old friend, embraces him, Semetka lets no emotions out. It’s not an unusual choice for a POV character, and it does have a small payoff at the end of the film when Semetka is finally forced to grapple with his morals and decide what kind of person he is. This climactic scene – the entire last act of the film – is terrifically tense and even slightly emotional, which is impressive considering what comes before.

Like the trek the soldiers are on in the film’s opening act, “Natural Light” is a seemingly never-ending slog through a barren landscape. Long stretches go by without a single line of dialogue as we watch the soldiers and their horses wade through the muck of the countryside and treat the villagers with disdain, if not complete disregard. The film is not without value, at least aesthetically: The focus on the natural world is so strong that when shooting does finally happen, the sound slices through the film just like a bullet, and there is genuine intrigue in the soldiers’ interactions with the villagers, as it’s never clear how things are going to go. When the climactic act finally occurs, it’s horrifying, but it fits the film’s tone in a muted way. Unfortunately, the film is so muted that it almost doesn’t exist, the images so leaden with portentous dread that they go right past giving the film weight to weighing it down so much that it sinks. The last act of the film, when the sun finally gives a warm glow to the proceedings for a little bit, works better than it has any right to, but the long, winding road the film takes to get there leaves you questioning if it was all worth it. It’s a lot of unpleasantness to get to a message we’ve heard many times before, in a way that doesn’t feel particularly fresh or exciting, even if it has some interest.