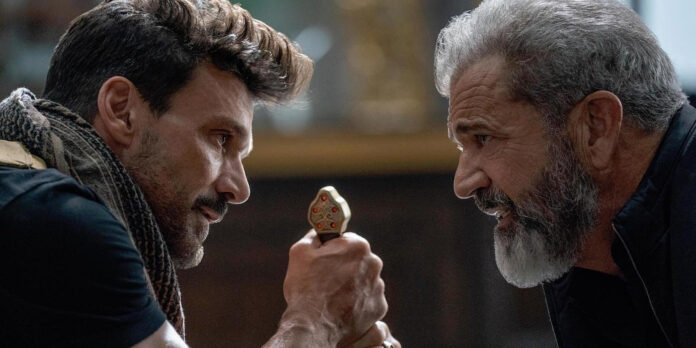 THE STORY – A retired military operative finds himself in a never-ending time loop on the day of his death.

It’s interesting how different subgenres can lie dormant for a long time only to become produced en masse to the point of overexposure. It’s a phenomenon that has been seen plenty before. It’s always interesting because these projects are often made independent of one another and just happen to release in quick succession. These results are usually seen as inventive in the first outing but followed by derivative examples that are far less appealing. It seems the subject of time loop stories are currently experiencing such a revival, and the recent success of “Palm Springs” last year has had many take notice of the recent movement. “Boss Level” provides yet another entry into this trend but is also another instance of being a far inferior product.

As previously mentioned, this story revolves around a character who is experiencing the same day over and over again. However, it’s quite a stressful day for Roy (Frank Grillo) as it immediately begins with hordes of professional assassins trying to kill him. He’s been battling them through hundreds of attempts but cannot understand why they are after him, particularly since he always seems to die at some point during the day. He eventually learns that these events are connected to the work of his ex-wife Jemma (Naomi Watts), a scientist working on a covert assignment under the menacing Colonel Ventor (Mel Gibson). As Roy starts to uncover more clues about his situation, he learns of the dire consequences at stake to the world, as well as the broken domestic life he feels eager to fix.

One does have some appreciation for the efforts to bring a particular spin to this familiar narrative, and director Joe Carnahan does try to showcase a sense of style here. Unfortunately, most of that display feels stilted by the spectacle that comes across as serviceable and not too thrilling, either. To be fair, there’s some impressive choreography and stunt work that can be valued. However, the impact is undercut by the visual effects of inconsistent quality. It’s difficult to completely lament the filmmaking choices, though, because they are competent. Still, when something as basic as multiple edits to gear shifts that indicate an intense car chase is employed, it makes such choices seem basic and uninteresting. There are even times when the set pieces feel lethargic in execution and drag the pace. Carnahan has delivered intriguing action films in the past, but the outcome here is less than captivating.

While the direction may only work on a very superficial level, its competency is far beyond that of the script. The fault here is not necessarily the story itself. Other films have used countless variations of well-known ideas and have been able to craft an engaging piece. The issues here are with a complete lack of wit and cleverness that can make one invested in these characters. The emotional journeys established are weak and shallow, while the irreverent tone comes across as forced and inauthentic. The tone feels mostly sophomoric and the endeavors to create some genuine catharsis from this material are undone by the obnoxious narration and anti-climactic finale. The flat comedy is only a further detriment to a hollow story that aims for innovation but ends with tiresome conclusions.

Frank Grillo isn’t usually an actor that conjures thought of range, but there’s a gruff persona he can deploy quite effectively. That’s mostly the case here in the role of this protagonist. He isn’t providing a performance that is that layered, but there is a rough charm he exudes that works well enough for this particular film. He even manages to convey some authenticity in the emotional parts to his credit, though they are certainly not that demanding. He ends up being the highlight of an underwhelming ensemble that surrounds him. Watts is completely wasted in a throwaway role that isn’t to the level of her immense talents and in which she shares no chemistry with Grillo. Gibson has moments where he could seem like a fun villain, but the role is so underwritten that he can’t save it. The rest are capable performers that are similarly underutilized, with maybe the biggest offender being Michelle Yeoh in a glorified cameo. One has the sense that acting wasn’t a priority in the construction of this film, but it’s yet another element lacking here.

“Boss Level” may not have an obvious parallel to a recent film that is occupying the string of time loop movies, but the most logical one that it can be connected to is “Edge of Tomorrow.” They are two movies that take this premise and infuse it with a sci-fi/action setting that can be used for impressive sequences. However, the former doesn’t have nearly the latter’s amount of cleverness, making this effort languid in its execution. The laziness resides mostly in the wooden script, but even the scenes of high-octane action are generally apathetic in execution. With performances that never find the place to feel extraordinary, what’s left is another excursion into a well-worn genre that’s less than stellar.