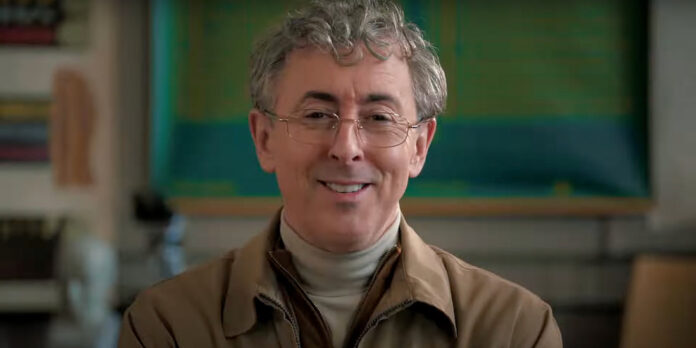 ​Sixteen-year-old Brandon Lee was an exceptionally bright student. He was the lead in the school play at Bearsden Academy in Scotland, one of the most popular students in his 1995 class, and dreamed of entering medical school. But his bizarre story under the direction of former classmate Jono McLeod reveals a sinister and unsettling secret. Despite this intriguing setup for “My Old School,” the film somehow garners the reaction, “I guess that was kind of amusing,” instead of being the kind of shocking documentary you find yourself thinking about long after it’s over.

Jono McLeod’s filmmaking choices are undeniably creative. The real-life Brandon Lee refused to have his face shown on camera, so Alan Cumming poses for all interview shots while lip-syncing to the audio from Lee’s interviews, for which he does an excellent job at making you believe he actually was Brandon. For recreations of past events, McLeod opts for animation, sometimes weaving real-life footage into his spirited world, playing through TV screens. The details in these animated flashbacks are fun and vibrant, while careful-eyed viewers might spot references to films like “Muriel’s Wedding” in the background. Editor Berny McGurk leaps between interviews with those who knew Lee when he was in school, creatively stitching clips together so that various interviewees finish each others’ sentences. On the other hand, the editing has an irritating tendency to reuse the same interview clip two, even three times without adding much to the film other than bloating the runtime to nearly two hours, when it’s possible this self-contained story could’ve been told in less than 90.

“My Old School” still has a fun, whimsical tone, with a few narrative twists as certain aspects of Lee’s story are contradicted by information the interviewers reveal. But the viewer knows upfront the truth about Brandon Lee. Early interviews make that clear. So instead, the film is all about waiting for Lee’s secret to be found out by his fellow classmates, revealing absurdities and some humorous tidbits that warrant chuckles from the viewer. At times, the film reckons with how disturbing Lee’s actions were, and there are attempts to understand why someone would commit this level of wrongdoing, but much of the film seems more focused on presenting the events for shock value. Such a ploy might disappoint some viewers hoping for something more dramatic or earth-shattering.

The whole story of “My Old School” seems ripe for a more ominous approach in the vein of “The Imposter,” but writers John Archer & Olivia Lichtenstein don’t want to go that deep. Still, it has an emotional montage at the end about growing up and touches on issues of class disparity and the fascist tendencies of private schools in Scotland in the ’90s that are interesting enough to appeal to a broad audience. Some may be let down by how much the film builds itself up to be a bigger deal than it actually is, but it’s still a fascinating story told entertainingly.