My Final Thoughts On This Year’s Oscar Season 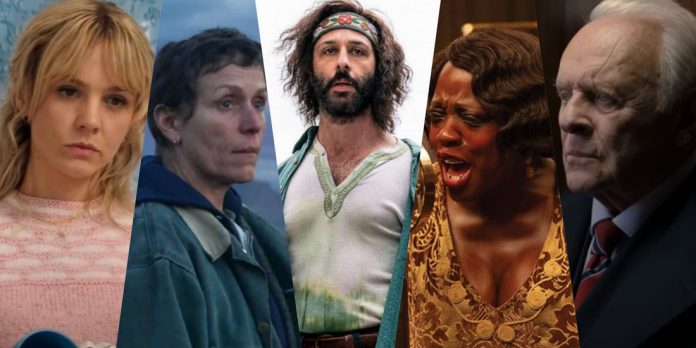 ​We have reached the moment of truth. The 2020-2021 film awards season has been the most prolonged awards season that many of us have experienced. Most are ready to move on to a new year and new films, but even though this has been a prolonged process, I feel as though most of us are declaring our final predictions and leaving behind this season with warm regards.

The most recent main show of the Next Best Picture podcast covered the team’s final Oscar predictions. (Check it out if you haven’t listened already.) I was unable to participate in the show; thus, below are my final predictions for the 92nd Academy Awards:

The majority of the categories at this year’s Academy Awards have a solidified frontrunner. However, there are outstanding races that have most pundits stumped even now as we enter the final days of the Oscar calendar.

BEST ACTRESS
This is the main event. We have never had an acting race quite like this. One where each of the contenders won a major precursor award, two of them helm from Best Picture nominees, and BAFTA voters used a jury system that eliminated three of the five women who could win. I wrote a piece in reaction to the SAG awards a few weeks ago, and although compelling cases have been made for certain contenders since then, I stand by most of the logic stated there. My final prediction is Viola Davis. In a fractured year like this, perhaps the SAG win weighs more than it would in another year where someone else loses SAG but still wins an Oscar by winning more than one of the other big three (Golden Globe, SAG, or BAFTA).

When it comes to predicting Viola Davis for Best Actress, I keep returning to these facts:

1. Davis is one of the most respected people – from any branch of the Academy – in the industry.

2. Only one woman of color has ever won Best Actress. Most people would be happy to see Davis become the second.

3. Davis’s role in August Wilson’s adaptation is a quintessential example of the type of role that typically wins in style, presentation, and prestige.

5. The film itself has proven to be thoroughly and widely respected even if the passion is lacking. “Ma Rainey’s Black Bottom” has an impressive accumulation of wins with precursor and guild awards.

6. If voters namecheck any film or any contender, it could be “Ma Rainey’s Black Bottom.” It comes across as the type of Oscar bait film that usually wins awards like acting and craft categories, with Davis having had even more public exposure during the time of voting than any of her competitors.

7. Davis is the establishment pick. If voters truly have an apathetic approach to voting this year, it benefits Davis because of her name recognition and profile. If people don’t watch the films, I could see most voters checking Davis’s name off because she’s tried, tested, and has never won Best Actress before. If there is low voter participation, like with elections, we can imagine older voters will participate more than younger voters. And thus, older voters will probably be most swayed by Davis’s work rather than by Mulligan’s unique performance or McDormand’s internal portrayal.

In the end, predicting Mulligan simply rings false to me. It seems like a recipe for disaster to predict someone who lost both SAG and Golden Globe, even if “Promising Young Woman” is beloved across the board by the Academy. McDormand’s BAFTA win has awoken a new sense of possibility for her Oscar win. In a year of “Nomadland” winning Best Picture, a Best Actress win would seem logical. Soberly thinking about Best Actress would lead to a McDormand win since she is an industry mogul, and the film is tracking for a big night. Although, I go back to this: Why did McDormand lose SAG when her nomination was the only chance for those voters to recognize the Best Picture frontrunner at that ceremony? Additionally, McDormand winning a third Oscar for such a subtle performance doesn’t seem to add up. In regards to Andra Day’s potential, the ironclad Golden Globe stat is something to consider. Still, I don’t feel it justifies predicting an Oscar win when you recognize the larger context of her campaign, narrative, and film itself “The United States vs. Billie Holiday.”

Here are the odds I would give each of the contenders in terms of the likelihood to win:

BEST ADAPTED SCREENPLAY
For months, it seemed like “Nomadland” was going to add another tally to its win count with Best Adapted Screenplay after winning the predictive Critics Choice award and the USC Scripter Award. “The Father” won the title at the BAFTA. Neither were eligible for WGA, which would have been most illuminating for predicting the Oscar winner. It seems as though “Nomadland” had the early buzz for the majority of the season, and “The Father” could be facing a new sense of passion at the last minute.

The argument for “The Father” revolves around the film’s strengths in its screenplay, the amount and quality of dialogue, the intricate plot, and the fact that the film was adapted from its roots in British theatre. By contrast, “Nomadland” has a much more minimalist screenplay. All of this makes an overall compelling case for voters who are playing fairly, look at the merits of each script as pieces of writing, and spread the wealth among the nominated films, so each Best Picture nominee goes home a winner. But come on…that’s not the world we live in. Most voters are going to vote for what they know – which is likely that “Nomadland” is a beast of a contender this year across the board – and won’t overthink it.

Very little has stopped “Nomadland” from complete domination this year. The BAFTA win for “The Father” doesn’t provide me with sufficient evidence to predict it for the Oscar. Florian Zeller has a home-court advantage with British voters over Chloe Zhao, just as “The Favourite” did at the BAFTAs two years ago, which was the more creative and impressive screenplay that lost to the eventual Best Picture winner in “Green Book.”

I also don’t sense there is a “spread the wealth” mentality that some pundits tend to focus on. Look at the year “The Grand Budapest Hotel” won the BAFTA award for Best Original Screenplay, then “Birdman” swept Best Picture, Best Director, and Best Original Screenplay. There were no misgivings by the Academy when they awarded Alejandro González Iñárritu three trophies, and Richard Linklater and Wes Anderson received zero. What would stop the Academy from doing the same exact thing to Chloe Zhao, when “Nomadland” has more control over this year overall than “Birdman” did in 2014?

BEST FILM EDITING
The announcement of the Best Film Editing tie between “The Trial of the Chicago 7” and “Sound of Metal” at the Critics Choice Awards foreshadowed an interesting throwdown between the two films contending for the same title at the Academy Awards. “Sound of Metal” looks to be on track with certain statistical trends a Best Film Editing winner typically has had in recent years, most notably a BAFTA triumph and the trajectory to win Best Sound. However, “The Trial of the Chicago 7” has the more memorably edited work in the film, with a showstopping montage that begins the feature and bold cuts between the present and past throughout the film.

BEST ORIGINAL SONG
The Next Best Picture Team did a great job of showing the multiple vantage points of this category on the podcast predictions episode. Diane Warren is running her own campaign in an uphill battle for “The Life Ahead.” “Eurovision Song Contest: The Story of the Fire Saga” has a sensational presentation of its song within its anti-Academy film, and Netflix has made this anthem its main concentration here. Overall, I would advise picking “Speak Now” from “One Night in Miami.” It rewards Best Supporting Actor nominee Leslie Odom Jr., who has had a high profile for the past year since “Hamilton” began streaming on Disney+. It’s the most simple and direct answer to this question, even if the film’s overall buzz is not as consequential as it was three months ago.

I’m Not Predicting It, But There’s a World…

Below are my personal preference selections for the Oscar categories, as though I had a ballot in this year’s voting contest. I always find these are fun to scan through since the majority of what we see around this time is more objective predictions rather than subjective preference:

Who do you think is going to win at the Oscars this Sunday? Let us know in the comments section below or on our Twitter account and be sure to check out our latest predictions here.