My Favorite Films Of The 2010s 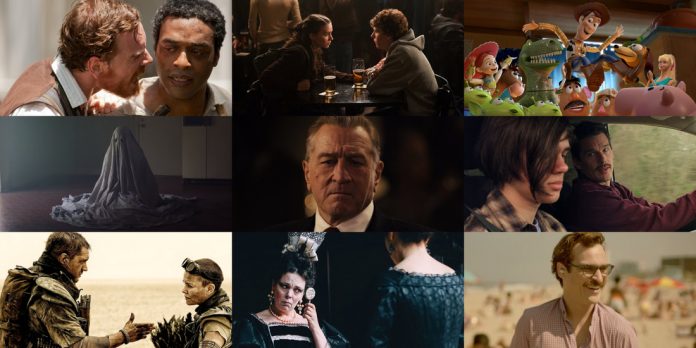 ​You already saw my top 10 films of 2019. You probably also heard me reveal my favorite films of the last decade on the podcast but I wanted to share it here as well for those that did not. The top 10 are my number 1 favorite films from each year of the decade, and the bottom forty are various other movies that held up for me on rewatches and can only be described as “my favorite.” This is by no means, my attempt to put together what I think are objectively the best films of the last 10 years. Nope. To paraphrase a Stanley Kubrick film…This is my list. There are many others like it. But this one is mine.

First, let’s start off with the 40 films that did not make my top 10 but I whole heartedly love. Organizing these was not an easy task as I adore every film on this list and will probably change the order again at a later date but as of today, here is where everything stands…

And now, on to the top 10 which I put together by simply taking my number 1 film from each year this past decade and pitting them against each other to come up with the order down below.

A big-budget art-house film that serves as a sequel to one of the most debated and endlessly fascinating sci-fi films of all time? It’s a miracle that “Blade Runner 2049” exists. It’s even more of a miracle that it measures up to the original 1982 film and exceeds it in some ways. Cinematographer Roger Deakins finally and rightfully won his first Academy Award for producing some of the most gorgeous visuals we have ever laid our eyes on. The story perfectly complimented the first film and had no studio meddling this time around, ensuring that the storytelling was free to be as bold and thoughtful as it needed to be. A thinking man’s sci-fi film, director Denis Villeneuve outdid himself with this film which is all the more impressive when you consider what an incredible ten years he had.

If you were raised a Catholic, then “Silence” must’ve had some sort of impact on you. Easily the best of Martin Scorsese’s religious epics, this grueling slow-burn of a movie put our faith to the test while we watched two Jesuit Priests also go through an endurance test of their own. Powerful in ways that I can’t fully describe, filled with lush cinematography by Rodrigo Prieto and absolutely committed performances from Adam Driver and Andrew Garfield, I heavily suspect “Silence” will continue to be revisited and re-evaluated. When all is said and done, for a Scorsese film that kind of came and went in 2016, I think it will be regarded as one of the legendary director’s best.

Darkly humorous and filled with its own unique attitude, “The Favourite” is a wickedly fun film from director Yorgos Lanthimos whose films “The Lobster” and “The Killing Of A Sacred Deer” almost came close to making this list. However, his British period drama is easily his best yet, featuring a trifecta of pitch-perfect performances from Emma Stone, Rachel Weisz and Oscar winner Olivia Colman. The screenplay is easily one of the decade’s best, with endlessly quotable lines and a shrewd manner. It constantly subverts our expectations for this genre. We watch “The Favourite” with a curiosity and a sense of glee that we rarely find in the movies anymore. I especially love films that defy convention and “The Favourite” certainly did that making it one of my favorite films of the decade.

​An important historical document that deserves to be studied and appreciated in classrooms all around the world so that we never forget the atrocities of American Slavery, “12 Years A Slave” is also an extraordinary story told with sensitivity, respect and uncompromising vision from British director Steve McQueen. Deservedly winning the Oscar for Best Picture, the overwhelming emotional power of Solomon Northup’s story (played brilliantly by Chiwetel Ejiofor in a career-best turn) is one for the ages, as is the level of artistry which McQueen brought to the film. I was floored when I first saw this back in 2013 and it has never left my mind since. Some images and sequences are forever seared into my brain, and although the experience was one I would not describe as enjoyable, I found it wholly necessary.

​Who doesn’t like a slick genre film every now and then? No need for historical or social significance, give me a simple story, execute it with a level of skill and let me enjoy the rest. Nicolas Winding Refn’s “Drive” certainly fulfilled that desire and he has not topped it before or since. Honestly, how many films can you think of that are as “cool” as this? Ryan Gosling’s unnamed driver rarely speaks in Refn’s arthouse actioner, reminding us of the days of Clint Eastwood’s action glory days as The Man With No Name. Special mention also to Albert Brooks as a terrifying crime boss in a supporting role that should’ve gotten him an Oscar nomination, but the fact that “Drive” was not fully embraced by the Academy only helps to cement its bad-boy reputation. With assured direction, colorful cinematography, a groovy score and soundtrack and set pieces that surprise you with its bursts of shocking violence, “Drive” is effortless.

Tension. Drama. Determination. Walking a fine line between passion and obsession, “Whiplash” is a fiery film filled with fury, frustration, and a cathartic ending that few films could match this decade. Backed by two outstanding performances from Miles Teller and Oscar winner J.K. Simmons, this teacher/student thriller announced writer/director Damien Chzaelle as a talent to watch. He would go on to achieve even greater success with his followup film “La La Land” but “Whiplash” is the film that made a greater impression on me. As tight as a snare drum and as loud as a crash symbol, this jazz infused indie hit all of the right notes and made my palms sweat harder in the theater than probably any other film this decade.

Paul Thomas Anderson is one of our greatest living filmmakers. Each movie he makes is an event that begs to be seen on the big screen. Like Quentin Tarantino, Christopher Nolan and Martin Scorsese, his respect for the art form is on another level, as he wears his influences on his sleeve. With “The Master” he crafted a stunning masterpiece that had us questioning theological, sociological and psychological themes backed by two all-timer performances from Joaquin Phoenix and Philip Seymour Hoffman. Phoenix, in particular, for my money gave the best male performance I have seen on screen since Robert De Niro in “Raging Bull.” His Freddy Quail is a wholly unique creation, as Phoenix imbues him with tics, physical outbursts and an emotional complexity that made him such an intriguing enigmatic presence. And while the tragically departed Hoffman gave other performances after this one before his untimely death, “The Master” remains as one of his finest efforts in an already iconic career that further proved what an immense talent he was.

A perfect movie. Pure and simple. Every frame, every moment, every beat, every decision of Bong Joon-ho’s fascinating satirical look at the class disparity in Southern Korea is absolutely immaculate. I cannot stress enough, how badly you need to see “Parasite” with as little information heading in as humanly possible. Part of the whole experience is not knowing the directions which this endlessly entertaining story takes. Feeling the audience around me in a cinema reacting to Bong Joon-ho’s masterpiece stands as one of the best cinematic experiences I had in 2019. Shocking, funny, intelligent and at times devastatingly brutal, “Parasite” takes you on a roller coaster, filled with twists, turns, drops, spins and when it’s all over, you want nothing more than to watch it again. With one of the best ensembles of the year, some jaw-dropping modern production design, precise editing, and thought-provoking ideas filled with heart and dark humor, “Parasite” remains unclassifiable and not only the best film of 2019, but one of the very best films of the past 10 years.

Pure, high octane adrenaline and entertainment. Gorgeously crafted by George Miller (in his 70’s nonetheless) and bursting with creativity, “Mad Max: Fury Road” is not only one of the best films of the decade but it currently stands (in my opinion) as the best action movie ever committed to celluloid. It’s a post-apocalyptic drama, meeting the thrills of “The Fast and the Furious” franchise, all backed by a simple story that never gets in the way of the art and design of this world that Miller started decades early with the first “Mad Max” film. Charlize Theron gave us an action heroine for the ages with the one-armed badass Imperator Furiosa and Tom Hardy mostly stayed out of her way and letting his actions speak louder than his words. Together, the two of them took us on a wild, fast-paced journey through miles and miles of desert ground backed by a singular and remarkable vision that we’ll never forget.

Meticulously crafted with not a single wasted note in its screenplay,  direction, or performances, “The Social Network” is another perfect film that the decade gave us early on that pretty much never left the top spot for me. Another well-cast ensemble filled with relative unknowns at the time who would go on to become some of the biggest stars of the decade, every actor perfectly rattles off Aaron Sorkin’s Oscar-winning rapid-fire dialogue with intelligence, humor and scathing delivery, making this one of the most entertaining, funny, dramatic, thrilling and thoughtful films ever made. Not bad for a premise, that on paper, didn’t sound too exciting at first. It stands as one of the greatest collaborations between writer and director I’ve ever seen, as the well thought out screenplay from Sorkin met the well thought out directorial choices of director David Fincher. Together, the two gave us a movie that not only perfectly encapsulated many ideas that were relevant at the beginning of the decade and foretold where the next ten years were heading, but it also incorporated universal themes of ambition, greed, betrayal and more to make the modern story of the beginnings of Facebook absolutely timeless.

Be on the lookout for more of our Top 10’s for 2019 and the decade, plus our annual NBP Film Awards and the NBP Film Community Awards as we enter 2020 and get closer to the 92nd Academy Awards (the true end to our film year).