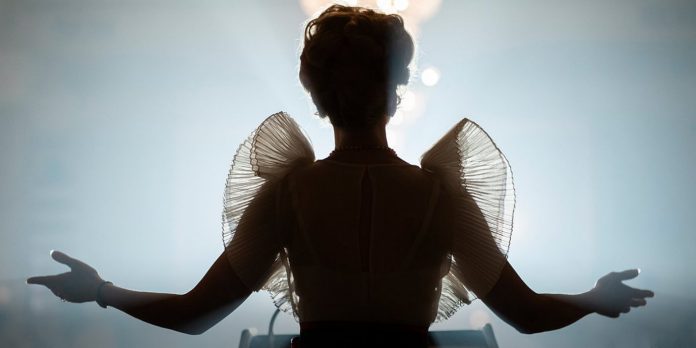 By Ryan C. Showers
​
​The limited series presented by FX, “Mrs. America,” recently completed its nine-episode run on Hulu. It was positioned center stage to be a competitive player in the 2019-2020 Primetime Emmy awards cycle. Each year, the Limited Series categories at the Emmys become stronger and more prolific. The lineup at last year’s Emmy Awards for this category was “Chernobyl,” “When They See Us,” “Sharp Objects,” “Fosse/Verdon,” and “Escape at Dannemora”. This group of contenders could easily rival any recent Best Picture lineup in terms of consistent artistry, style, and substance. This is a trend that will continue. This year, “Mrs. America” is one of the titles that continues the trend of adult-centric entertainment, with some of the greatest industry moguls working today, fleshed out over an expanded amount of time on television rather than in the cinema.

​“Mrs. America” is a daunting undertaking. It was forced to walk a fine line in its exploration of this particular history, one in which conservative women fire enough cylinders into the momentum of the women’s movement to halt the ratification of the Equal Rights Amendment. With a product as ambitious as “Mrs. America,” you may have some questions. I’m someone whose undergraduate college majors were Women’s Studies, Political Science, and Communications (with a focus on media representation). If anyone were ever prepared for “Mrs. America” to come into the public sphere, that person would be me. I have worked on political campaigns – namely one whose goal of electing the first woman president was thwarted in 2016 – in an eerily parallel trajectory as the events depicted here. My past experiences combined with my decades-long interest and analysis writing about movies, television, and awards shows give me a unique, perhaps over-informed reading of “Mrs. America.” Here’s my take on the key takeaways one might have. (For a panel of perspectives, please listen to our podcast reviews of the show.)

Does the history hold up?
For the most part, the portrayal of events in “Mrs. America” follows my understanding of the historical record, probably more so than the everyday period piece based on real events. The best and the worst of “Mrs. America” falls under its expression of history. On the one hand, “Mrs. America” finds corresponding emotional beats from the events depicted over the 1970s to the Trump era of American political dynamics. The show nails this aspect – there were moments throughout the series where it affected me viscerally by its savviness in this department. Yet, on the other hand, at times the show feels like it’s going through the motions, recounting history without a firm perspective as to why it’s dressing up famous actresses and retelling history. “Mrs. America” depicts the real-life characters brilliantly, yet its composite character, Alice (portrayed by Sarah Paulson), is less dynamically drawn and much less successful than the other famous figures of the era. My favorite thing about “Mrs. America” is the way it probes into the complexities of Phyllis Schlafly: her motivations, hypocrisy, goals, complicity, and her arbitration of her eventual fate. “Mrs. America” thrives when it asks uncomfortable questions and provides dark answers about Phyllis.

Is “Mrs. America” the best limited series of the year?
The answer to this question depends on whom you ask. I would say no. My guess is the show is more respected. If this were the Oscars, most voters would probably rank “Mrs. America” as their second or third choices, rather than the polar extremes at the top or bottom of their ballots. My preferences lie more with the invigorating storytelling of race, feminism, and inter-personal relationships in “Little Fires Everywhere” and the stunning technical achievement and racial narrative of “Watchmen”. I may even prefer the slick Netflix examination of sexual assault and law enforcement in “Unbelievable,” too. Someone like me is the target audience for “Mrs. America,” yet it would be untruthful to say I had the same vigor every week to watch its new episodes that I did for, say, “Sharp Objects” two years ago or “Big Little Lies” last year. If the show were the first three episodes and the finale, this would probably elicit more raw passion from me. I do find assigning each of the supporting roles a standalone episode lessens the momentum of the plot surrounding the ERA and exploration of the women’s movement.

​Is “Mrs. America” the Emmy frontrunner?
Again, this question depends on whom you ask, which to me says there’s no clear frontrunner at this point. Based on buzz, reception, and awards trajectory, every show is approaching the finish line in about the same place. Nominations may indicate more, but my gut tells me “Mrs. America” will not win Best Limited Series. “Mrs. America” achieves textbook snob appeal, with its success in its period design and roaring female performances. Also, its eerie retrospective of the second wave feminist movement could very well lead it to a winning night. However, the buzz around this show isn’t that of something like “Big Little Lies” that overwhelmingly took command over pop culture discourse. The buzz exists for “Mrs. America” but not enough to be firmly ahead of “Watchmen” and “Unbelievable” at this point.

Will Cate Blanchett win the Emmy award for Best Lead Actress?
This is one area of “Mrs. America’s” Emmy fate I feel confident in making a solid call. Cate Blanchett will likely win Outstanding Lead Actress in a Limited Series or Movie, making her another step closer to attaining an EGOT. Blanchett’s turn as Phyllis Schlafly is harrowing in typical Blanchett-ian fashion. Blanchett fashions the role with the theatricality she’s known to bring to characters, all the while bringing complicated, jaded edges to one of the most controversial figures in American history. Like Kate Winslet in 2011, Julianne Moore in 2012, and Nicole Kidman in 2017, Blanchett’s stature as one of the acting giants in film, a successor to Meryl Streep as one of the great living actresses, is almost assured to allow her to handily walk away with this award. Some predict Regina King in “Watchmen”. Maybe I would see King as more competitive if she didn’t already have three Emmy trophies, if her role wasn’t so rooted in the fantasy genre, and had she been more of a player in the winter award shows. The truth is, Blanchett gets a lot more screen time and a lot more theatrics to play with, even if King’s character is one of the most empowering of the year and Blanchett’s is one of the most detestable. Blanchett makes sense as a winner even if something else wins Best Limited Series, whereas the same is not true for King.

Most likely, the acting branch will flood the Limited Series/TV Movie categories with high profile television and film actors and actresses. Aside from Blanchett, John Slattery will most likely be rubber-stamped into the Supporting Actor category. The enormous ensemble could result in many possibilities for Supporting Actress. Once you factor in the surefire options from the other contenders (Allison Janney, Toni Collette, and Jean Smart), “Mrs. America” will be left with two or three slots to fill. Common wisdom would suggest Margo Martindale and Sarah Paulson as the two most likely due to their history with the Emmys. Rose Byrne, who was nominated for two Emmys for “Damages,” is in a strong position to be nominated for playing the legendary Gloria Steinem, who was the face of the women’s movement and maintains a big seat at the table in modern feminist issues. Byrne’s portrayal of Steinem is my personal favorite from the “Mrs. America” women in this category, so I’m rooting for her. Uzo Aduba, who has her fair share of fans in the Television Academy, would be an amazing inclusion for playing the extraordinary Shirley Chisholm. However, the show’s failure to elaborate on Chisholm after the third episode may prevent her from breaking through, as will the limited exploration of Elizabeth Banks and Tracey Ullman’s roles.

Do you agree with these assessments of Mrs. America? Is it the best limited series of the year? Will it win the Emmy for Best Limited Series? Will Cate Blanchett win Lead Actress? Tell us what you think in the comments section below or on our Twitter account.