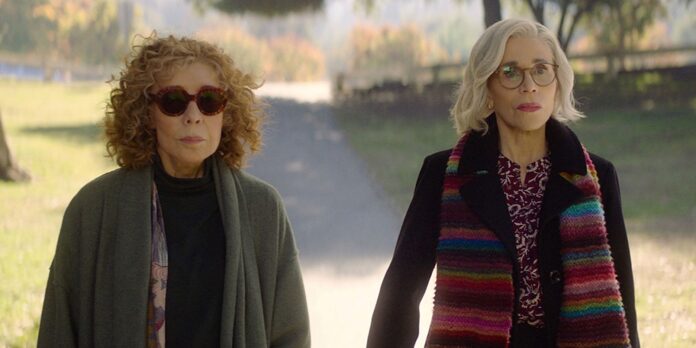 THE STORY – Back in the ’70s, Claire (Fonda), Evvie (Tomlin), and Joyce were all great friends, until terrible things transpired, secrets were kept, and everyone drifted apart. Now Joyce has died and it’s time to set things straight. Only moments into meeting at the funeral, Claire informs Joyce’s husband, Howard (Malcolm McDowell), that she’s going to kill him. Evvie arrives late, upstaging Howard’s eulogy, and once she catches wind of the plan, decides to help Claire deep-six the old bastard.
​
THE CAST – Jane Fonda, Lily Tomlin & Malcolm McDowell

When you’re a legendary screen actor, you usually get called upon to repeatedly play some version of the same character. Enter “9 To 5” costars and best friends Jane Fonda and Lily Tomlin, who have enjoyed something of a career renaissance in recent years in part thanks to their Netflix series “Grace & Frankie.” The two have been playing versions of themselves opposite each other for decades now, and their well-honed chemistry is still a draw in the way of classic Old Hollywood pairings like Astaire & Rogers, Powell & Loy, and Hope & Crosby. “Moving On,” their latest film together, gives them material perfectly suited to their strengths, both individually and together. Still, their legendary chemistry can only cover up so many of the tonal lapses in Paul Weitz’s screenplay.

Fonda and Tomlin play old friends Claire and Evelyn, reunited at the funeral of their old college friend Joyce, at which Claire tells the widower (Malcolm McDowell) that she’s going to kill him. There’s history between them, history from which she is still scarred, and she’s decided to take matters into her own hands. The reappearance of her ex-husband (Richard Roundtree) throws a bit of a wrench into her plans, but Evelyn has a few tricks up her sleeve, too. Laughs and shocking revelations ensue as the ladies work towards their revenge, but even if they get it, will it be worth it?

Weitz’s screenplay is perfectly attuned to his performers’ strengths: Evelyn has a sharp, caustic wit, completely unafraid to put herself out there. On the other hand, Claire is more reserved, with a vulnerable sort of anger vibrating within her. Neither actress is asked to do anything more than exactly what we expect of them, and they deliver at the top of their respective games. Tomlin makes a meal out of her iconic entrance in the middle of a funeral eulogy, and Fonda gives several heartstopping line readings as she eviscerates the idea that such long-ago trauma doesn’t matter now with just three words: “It was yesterday.”

Indeed, Fonda’s strengths as a dramatic actress prove to be the film’s secret weapon. Known just as much for her activism as for her acting, it’s clear that the message of the film resonates deeply with her, and she brings wells of deep feeling to the dramatic scenes that really sell the material. Unfortunately, though, “Moving On” is a better black comedy than a drama, and those dramatic scenes, as well-performed as they are, stop the film cold. This leads to a film that is a bit of a mess tonally, with some scenes working really well (Tomlin’s entrance at the funeral is a perfect mixture of cringe comedy and drag queen-level savagery) and others coming on much too strong, most notably a late scene in which Claire details the assault that broke her friendly relationship with McDowell’s character. Fonda sells it, but in the context of the occasionally wacky comedy surrounding it, it sits very uneasily, all the more so for how difficult these topics are to discuss.

In the end, “Moving On” is nothing so much as a testament to the enduring talents of its lead actresses. It has a lot of contemporary issues on its mind and is admirably fired up about them. If the screenplay had been better able to mix its comic and dramatic registers, it could have been something very special. As it is, it’s merely an enjoyable romp with Auntie Jane and Auntie Lily, the pleasures of which speak for themselves. It may be more complex than you expect, but it doesn’t hit quite as hard as you might expect, either. And without its legendary leads, it might not have worked very well at all. Bless those legendary ladies: They’ve still got it, and hopefully, they will continue giving it for many years to come.

"MOVING ON"<b>THE GOOD - </b>Jane Fonda and Lily Tomlin still got it, and Paul Weitz has given them material perfectly suited to their talents.<br><br> <b>THE BAD - </b>The tragicomic register of the screenplay plays both ends of that spectrum too broadly for them to sit comfortably together. <br><br> <b>THE OSCAR PROSPECTS - </b>None<br><br> <b>THE FINAL SCORE - </b>6/10<br><br>